People sometimes want a small tree, but they don’t know what they’re asking for. They have in mind maybe a young magnolia or cherry or crab apple such as you may see in many front gardens. Alas, they all grow ‘too big’. Only in a big garden are they small. Confined between pavement and house they soon start scratching at the windows. Then they get badly pruned, as if by gigantic goats, and never recover their youthful figure. When books describe trees as small, medium and large, they mean, roughly, 8-12 metres high, 12 to 20, and huge. Even a small tree will grow much taller than a two storey house. If you have a small garden and want to go on being able to see out of the bedroom window and you don’t want to upset the neighbours– not everybody does – you need a tree that is smaller than small. XS. You might be better off with a big shrub, like the winter flowering Viburnum bodnantense. (But big shrubs don’t have the same kind of structure as trees. Roughly, big shrubs will be multi-stemmed and the older shoots will weaken and die to be replaced by young ones coming from the base, whereas actual trees have a permanent woody structure, with, almost always, a single, branching trunk.)

Some japanese maples make beautiful very small trees. But remember that they don’t tolerate drought and need protection from bright sunshine and strong winds. And, like many plants, they tend to spread wider than they grow tall. (We always ask, how tall does it get? As if plants were made in our image. Trees grow rapidly up when they are competing with each other in woodland; left alone they relax and spread sideways.) And remember that japanese maples are a large and varied group. As are, for example, crab apples. Check the dimensions before you buy. Some grow twice as big as others.

My favourite extra-small tree is the myrtle. It’s a suitable candidate for the one plant small garden, see Gardening Notes number four, Gardening for Old Age In white flower now, not a twig without its flowers in July, so that you escape the spring rush. In my garden it’s the favourite of honey bees, which are otherwise far outnumbered by bumble bees. They wriggle and wrestle their way through the tight-packed corona of stamens. Later the berries will turn through green to purple-pink (why is the vocabulary of colour so limited?) to black and provide late food for blackbirds at the end of winter. Just once a passing flock of redwings ate the lot in an hour. The foliage is delicately scented, I don’t have many words for smells either, but I’d say it’s like citrus. The young bark is cinnamon coloured.

It’s surprisingly difficult to buy as a little tree. Mine was sold as a herb, about four inches high, in a 7 centimetre pot. I was patient, and when established they grow fast.

My tree has an interesting history. It developed with two main trunks, Y shaped, branching low down. This is a very unstable structure for a tree. During the heavy snows of February 2012 – maybe the last time we had proper snow – one half broke away, (see the picture at the top), which was good because the tree was too close to the kitchen window. The half which obscured the view was the half that went. But ever since, shoots have sprung up thickly from the old stump; the tree put so much of its vigour into trying to make good that amputation. After years of cutting away the new shoots and years of them springing back as strong as ever I adopted a strategy. I leave a strong young branch, or a little cluster, to reach flowering size, at about five feet high, and then cut it back and allow another, shorter one to grow on to replace it. So there is a succession.

Just behind the myrtle and growing taller than it is an azara. Azara microphylla, which is a small tree, not an extra-small tree. It’s an evergreen – they’re both evergreens – with small, box like leaves, arching sprays of branches and tiny yellow flowers in late winter with a scent of vanilla. Keeping order between the two trees involves some climbing: I take out shoots of the azara to stop it from becoming too dominant, and to keep it off the roof of the kitchen extension, and cut away some of the weaker twigs on the myrtle to allow light in to plants which grow in its shade and to keep open the view from the kitchen. To escape from the azara, and get to the light, the myrtle has developed some long, almost horizontal branches to the south which luckily grow along the length of the ivy covered fence rather than out into the garden, so that its spread is probably greater than its height. Both trees are suitable for this kind of play because they regenerate willingly from cuts.

Of course it’s impossible to predict accurately the size of trees. It depends on soil, climate, aspect. (I used to find ‘aspect’ a tricky word: it refers to the position of a plant, whether in sun or shade, whether shielded by high buildings, etc.) The nearly famous and beautifully rounded koelreuteria at St John’s see Garden Notes no 21, picking about the gravel. Verbascum, foxglove, Koelreuteria, etc.   is restrained by its position, rooted in tarmac, and as is common, restraint intensifies flowering. A seedling from the same garden in Islington and of the same age which was planted at G nearly twenty years ago is still a spindly thing about six feet high, and never flowers. There, the soil is acid, or as I should say, has a low ph. (Here it’s alkaline, or has a high ph.) Ash and hawthorn growing on limestone pavement in windswept hills, as in the Burren in Ireland, are prostrate, not more than a few inches high. The idea of bonsai derives from mountain hardship. But if you’re growing in the soft south, expect swift, sappy vigour, although, in the case of my myrtle, rare heavy snow hobbled its galloping growth. Anyway, the koelreuteria would normally be small to medium, I’d say.

As a footnote, here’s an interesting very small tree growing next door, a japanese maple which has coppery pseudo-autumnal colour through spring and summer (the photo was taken today) and then a fiery display before the leaves fall. It’s growing against a north facing wall; you can see how grateful it is to be out of scorching sun. Over the years it’s had to live with a succession of residents who have either neglected it or pruned it – er- inappropriately. I suppose you could treat an acer like topiary. Goats will make topiary out of just about anything. But since a large part of its beauty is the gracefully arching shoots it seems a shame to reduce it to a ball. At the top you can see how some new growth is escaping from the tight ball and beginning to assert itself. If it were up to me I would thin it out, try to give it a light, airy shape whch would act as a screen to the big bay window without darkening it too much. I’ve had a chat with my new(ish) neighbour and maybe he’ll let me.

Probably the biggest single mistake when planting is to underestimate future size. Like children, plants seem so small at first but a few years go by and you can’t believe how big they’ve grown or how quickly the time has gone. 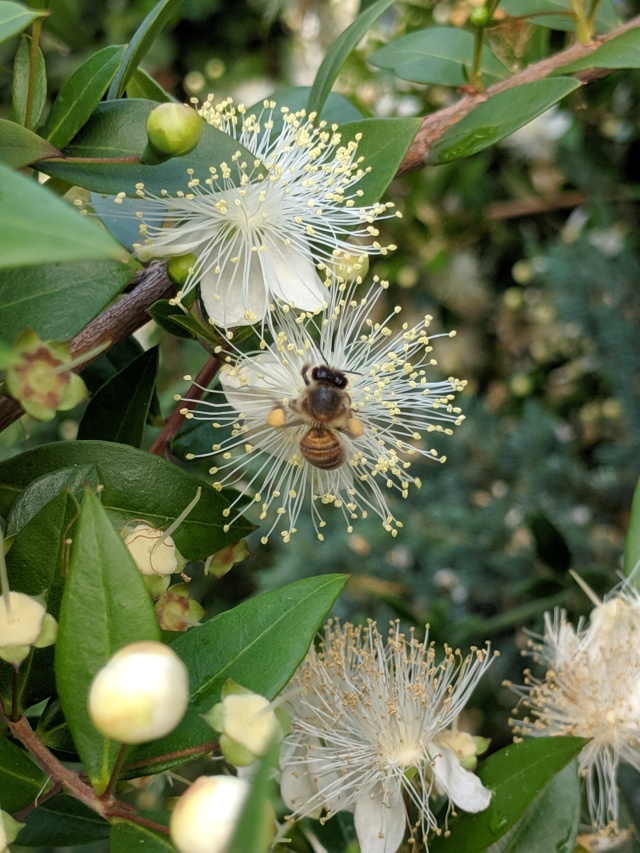 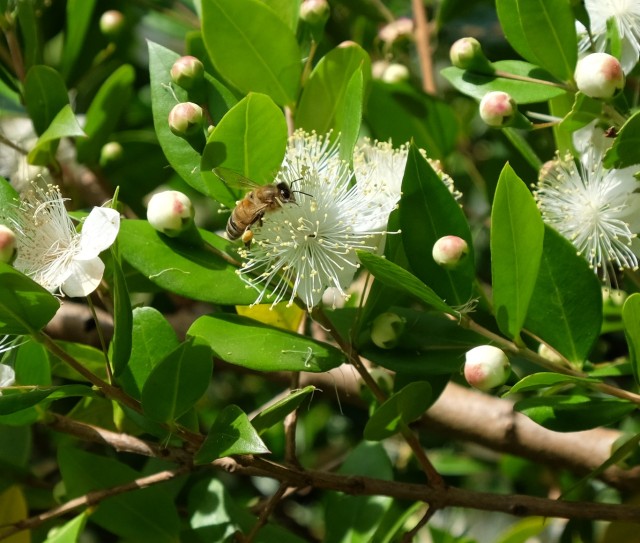 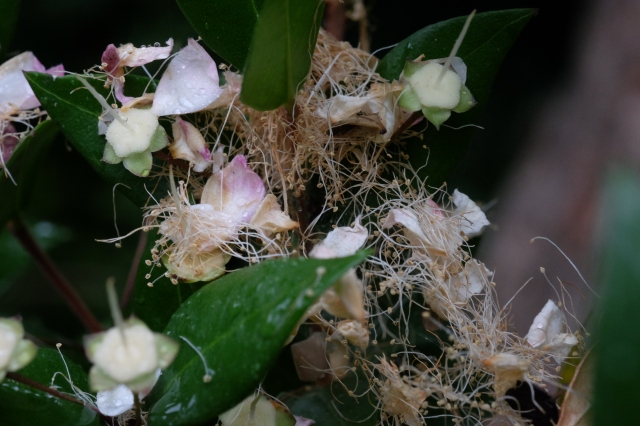 1 Response to garden notes no 26, myrtle