This koelreuteria – sorry, I know, one of the more tricky botanical names, after “Joseph Gottlieb Koelreuter, 1733-1806, professor of natural history at Karlsruhe, a pioneer experimental investigator of plant hybrididization”, aka Pride of India, although it comes from China, and Golden Rain tree – was a seedling from the garden of a customer of mine in Islington. I had it in a little pot at home for a few years, then in a bigger pot, where it endured without prospering. When we made a raised bed on the tarmac by the east wall of St John’s church we planted it out, and I thought it would only be happy there briefly because the bed was less than eighteen inches deep. But it developed into this wonderful small tree, no doubt by forcing its roots down through the tarmac to nose around among the sewers. It must be now getting on for twenty five years old, but it has only been at St John’s for ten years. It seems to like dry soil and a hot summer to flower well, and has chocolate brown inflated seed pods in autumn. This photo was taken in early July, so well after most trees and shrubs have flowered. We now have seedlings at St John’s, which will be available one day.

On the various ways of seeing and being in (or out of) a garden, this lovely moment in a letter of Keats: “I scarcely remember counting upon happiness—I look not for it if it be not in the present hour—nothing startles me beyond the moment. The setting sun will always set me to rights, or if a sparrow come before my Window I take part in its existence and pick about the gravel.”

On garden style and design: I recently learnt that in Greek a man doesn’t grow a beard, he allows it. The work of gardeners could be seen as a series of prohibitions and permissions, but the business of growing is nothing to do with them.

On succession in the garden: in this years’ show at the Palace of Varieties, we’ve applauded the hellebores, admired the honesty, gasped at the echiums (more from them next time), now the foxgloves are centre stage, and warming up in the wings is the amazing Verbascum olympicum, a priapic drag queen. 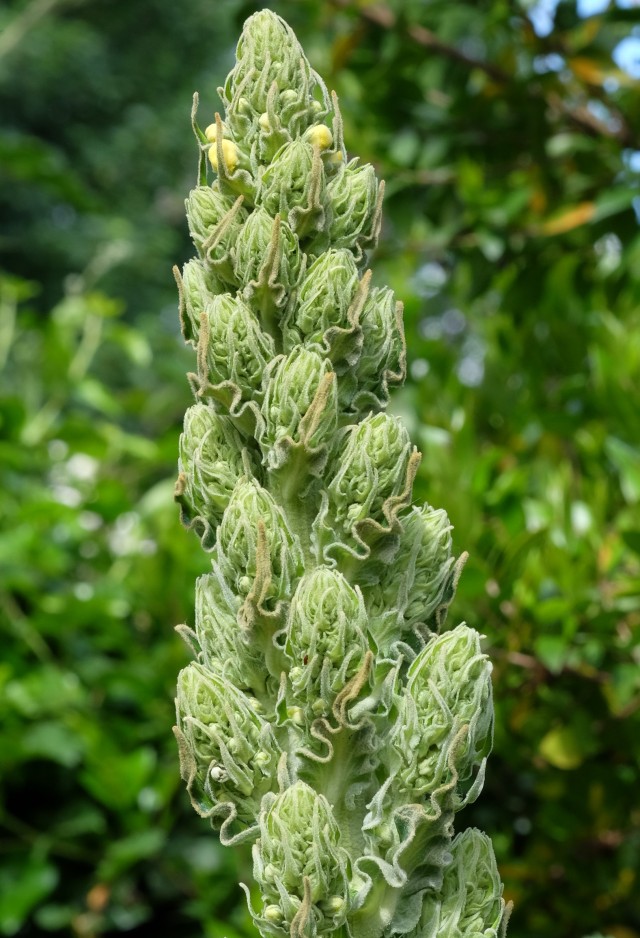 This verbascum (mullein in English) is the subject of a bold lie from Chiltern Seeds, whose catalogue describes it as “a perennial that will flower in its first year from sewing.” Two in one! It’s not a perennial, and it flowers in its second year, though it’s possible that it would flower within twelve months of sewing, if you’re lucky. Sewn in May, its first buds might be about to open at the end of the following May, but I don’t think that is what most people would understand by “in its first year”, and a more likely timetable would be: germinates one year in late summer, survives the winter as a baby, grows big the following year, then flowers in the summer of its third year, in a seven foot high many-limbed extravaganza. Patience rewarded.

Fanatical gardeners, whether fattening leeks in Northumberland or force-feeding dahlias to the size of dinner plates in Scotland are looking to break the boundaries, to escape the constraints of our cool islands and their dark, slow winters. Helichrysum petiolatum is a common grey-leaved bedding plant with furry leaves, sold as a tiny thing in a 7 centimetre pot, usually planted as a soft foil to for example pelargoniums, when it will send out gently arching shoots a couple of feet long. It’s tender, but benefits from global warming and city heat to live on and get big. You could say that it’s been ramped up. Scaled up. With Putting Down Roots I planted one at Emma Cons garden, just opposite the Old Vic. It was one of our most contested sites; we didn’t have a foothold there for very long, but it had its moments. I think the helichrysum survived not one winter but two and became big enough for a homeless person to cut a waterproof sleeping cave inside it without significantly harming the plant. This is my current one, after only one winter (or is it two?): 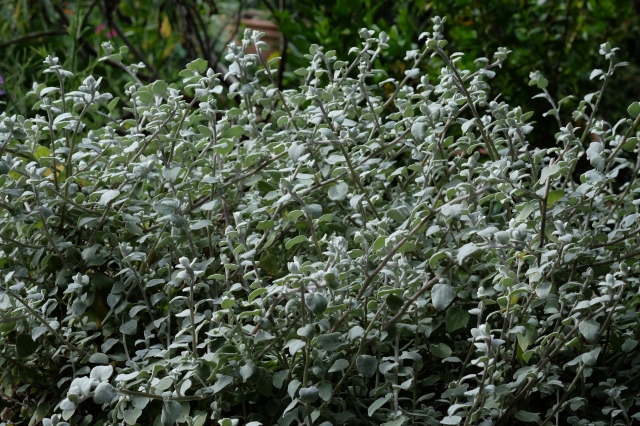 I haven’t got the room to let it become as big as a room; I’ve already cut it back a little several times, otherwise I wouldn’t be able to get out of the kitchen. It enjoys good protection: it’s close to the big kitchen window which leaks heat in winter, it has some overhead protection from the azara tree, a fence to the west and the greenhouse to the east, but it’s open to the south and the sun.

Since we love markers, boundaries, divisions, let’s say that the end of the forget me nots, and here they are coming to an end, with just a few small pale blue flowers on the end of long, dry, mildewed stems, is the end of spring. The name, I read in Mabey, is not an ancient popular one but a translation by Coleridge from a sad German ballad. It used to be known as scorpion grass.
And to pick a plant which marks the beginning of summer I’ll say the foxglove. It’s well known that foxglove seeds stay alive for years and spring to life in the woods when a tree falls and light falls on bare earth. Unlike many bold, adventurous plants and cunning weeds, in the garden it usually won’t seed in little gaps or under the cover of overhanging leaves, it wants space. When we cleared big old laurels and rhododendrons at G. years ago a small army of them appeared. These ones are growing at the back of a neglected vegetable patch. 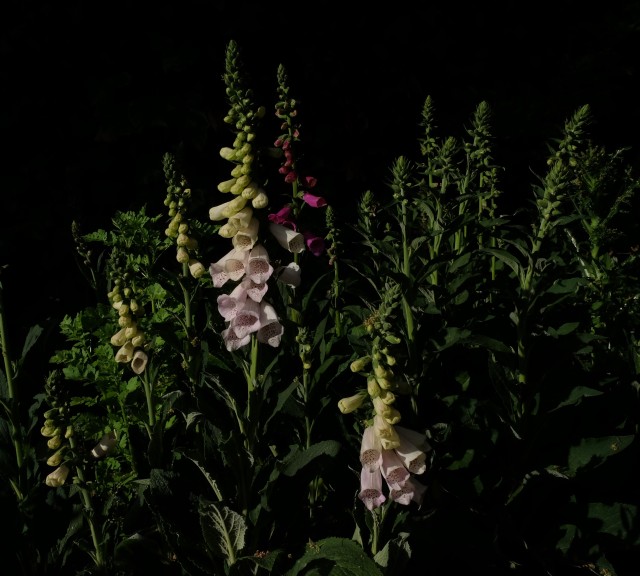 It’s great to have a hundred, but one is good too.

A correction. There are lots of aphids this year! See  Garden notes number fourteen; swarming things, tulips  Not like the old days of course but… are they having a revival? Could it be because the air is cleaner?

This entry was posted in gardens and tagged names, Putting Down Roots, St John's, Waterloo. Bookmark the permalink.