For entertainment at my birthday party – I would have been eleven, I think – my father brought home from work a film projector, a little screen and several short educational films made by companies like ICI and BP. We sat in rows, somehow squeezed into the kitchen, like at school, for my birthday treat.  I remember two of them. One was about the fight against locusts. It showed them darkening the sky and consuming every leaf, horror both biblical (the abomination of swarming things) and contemporary. The other was about malaria and showed, or appeared to show, fevered victims near death.

Thanks, Dad. But the films offered hope: new insecticides were on hand to fight these plagues. If I was eleven it must have been 1957, five years before the publication of Silent Spring.

At this time of year, late April, I used to go out into the garden in the morning and rub my finger and thumb along the tips of rose shoots, making a paste of greenfly, or rose aphid. New growth on elder and ivy would be black with another kind. For vigorous plants like these the aphids acted like a form of pruning without any serious long term damage. But broad beans could be wiped out in a few days. They are also carriers of disease, most importantly for potatoes, which is why certified seed potatoes in this country are grown mostly at fairly high altitudes in Scotland which are aphid-free.

I don’t know if their decline is especially severe in London, but I see very few.  I began to miss them when I read that for many small birds a paste of aphids and other invertebrates is like breast milk – they feed it to their nestlings during the first few days of their life, when they are too small for anything chewy..So when I do see them nowadays I’m pleased, I even rejoice a little, and yesterday I saw the first of the year, on artemisia:

and on a rose:

There were only a few on the rose, and by this morning they were all gone.

How old do you have to be to remember the insect sludge on car headlights and windscreens after a long journey?  (A long journey in the 1950’s and early 60’s could be 100 miles. If my father got up to 40 miles an hour that was a rare adventure.)

You might remember this tulip, Honky Tonk.  see:  Garden notes number eleven, some more spring flowersI’ve always been impressed by how rapidly it spreads, and I read today in the RHS magazine that it’s a variety of Tulipa clusiana, which  spreads by stolons, shoots which branch off from the bulbs to form new plants, (not that I’ve noticed them,) and that it’s a native of Iran and Afghanistan, fed by melting snow in spring and enduring temperatures of 40 degrees when dormant in summer. It’s often said of tulips, which nearly all come from hot countries, that they like a good baking.  You can also buy the species itself, and other varieties in different colours.

https://tulipsinthewild.com/  This is a link to a brilliant website which shows tulips in the wild from France to Afghanistan, with a map showing a key. It makes you want to go to Kazakhstan and Crete and Turkey and Kyrgizstan and Greece and even Switzerland. The territory of the tulip spreads like an ancient empire across a relatively narrow band of latitude from south eastern France almost to China.

I’m being led out of the garden again: to landscapes which remind me of gardens. On a mountain called le Duffre, where the Alps meet Provence in south eastern France my sister Judy and I found a single Tulipa sylvestris, (it was late May, we were too late for the others):

One April in the hills of Parnon in the Peloponnese, driving through miles of burnt out forest, I came across an oasis, someone’s little grove of walnut trees, where Tulipa orphanidea was in flower (see also in the Peloponnese ) 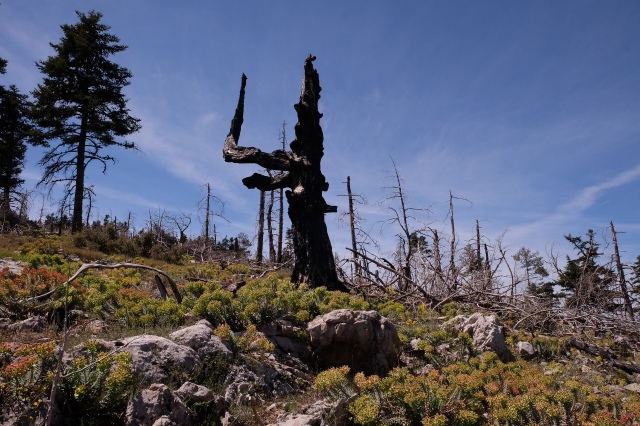 This entry was posted in gardens, mountains, flowers, landscapes. Bookmark the permalink.