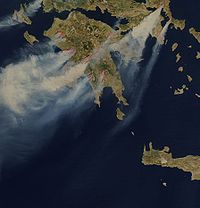 This little picture shows the forest fires that burnt in the Peloponnese and near Athens in August 2007. Some of the plumes of smoke are a hundred miles long.

I looked it up when I came back, after seeing miles and miles of dead forest, and little regeneration. Around 80 people died. It was difficult to estimate the loss of wildlife, except for the tortoises, whose burnt out shells could be counted. I’d seen one – a living one. It was about to cross the road. I told it that was a bad idea, even though there was hardly any traffic, and it slowly turned around and headed back into the scrub – phrygana, that’s what it’s called. Basically it consists of small shrubs, often spiny, aromatic, woolly, hairy,  poisonous, colourful and not very palatable to goats. Ecologists make it sound like the last stage in a sad degeneration towards desert.

I wondered why I’d been only vaguely aware of the fires. 2007 – what was happening? Oh yes – the bankers were fiddling while Greece burned. Same sort of thing has been happening ever since. Of course, the bankers didn’t start the fires. Arson is often cited, but the experts believe that the main cause is fantastic human stupidity. A huge fire was started in Catalonia by some trippers who had a barbecue in a virtually smouldering  wood – it was over 40 degrees before they started cooking – even though they were told by local villagers that they were crazy.

Then I read about the conferences, attended by experts from all over the world, at which reforestation was discussed and planned. Pinus nigra, the black pine – don’t know why it has that name, the only black ones I’ve seen have been burnt – which grows in European mountains in an arc from eastern Spain through Austria to Greece, is not serotinous,  or rather its cones are not. Fire is a trigger for some plants, including some pines, to release their seeds. This function is called serotiny. But not Pinus nigra. They release their seeds in winter. Fire simply kills all the seeds. This means that the forest could only regenerate slowly, creeping out from little groups of survivors.  At one of the conferences they produced a diagram, taking into account the impact of drought, goats, the vigour of the spreading phrygana etc, which showed circles spreading out so slowly they looked like tree rings. In the grand scheme of things this wouldn’t matter. In a few thousand years the forest would probably have recovered. But we haven’t really got a few thousand years. When you’re worried about tomorrow, geological time offers no comfort. And I read about he difference between ground fires and crown fires. In ground fires dead twigs and leaves and shrubs burn up and the thickness of the bark of the trunks protects the trees. In crown fires the forest is destroyed from above, its shoots and leaves consumed by racing flames, by the speed which killed people too.

It was on my last day in Greece that I decided to drive through the  Parnon mountains on my way back. I’d never been there before, but seen the long line of hills from the Taygetos mountains to the west, on the other side of the valley where Sparta lies. I’d walked through green valleys in the Taygetos, where springs emerge from the limestone, and climbed up through a forest of pine and fir then over the white rocks (where aubrieta was blooming)  up Profitis Ilias, where crocuses, scillas and celandines (what’s that doing there!)  appear on the edge of the melting snow. It seemed heavenly there. Profitis Ilias means prophet Elijah, it’s the highest mountain in the Peloponnese, but Elijah is all over the place, as if his chariot floated up to heaven from every hill. Though some say it’s nothing to do with him really, but that the name derives from the Greek word for the sun, helios. Anyway, if that was paradise, Parnon was hellish.

I felt numbed as I drove towards Polydroso. And I was confused: the old name of the village was Tsintsina, given by Slavs who moved south and settled there in the middle ages. The name was changed to the bland but Greek Polydroso by a nationalist government in the 1950’s, but many people still  used the old name and both appear on signposts, but never together. There were few villages; the whole area seemed deserted. I saw no goats even, no olive trees, just emptyh phrygana and then the burnt out forest began, blackened trunks still standing. Near the road were a few islands of trees, maybe reflecting the pattern of the fire-fighters efforts. I stopped at one of them. In the shelter of survivors some saplings grew, pine and fir, and flowers, even a few orchids.

orchid, astragalus and helianthemum (I think) at the oasis:

Not a pine, but Abies cephalonica, the greek fir, hardly mentioned at the conferences, grwoing on the edge of the oasis:

Vinca grew there too, it was curious to see so familiar a plant in so strange a place,  spread over a curious, stony, flat area which might have been a threshing floor back in the days when there was even arable land in that area.

Outside the oasis, among the stumps, stretched the kingdom of euphorbia. I used to like Euphorbia rigida,  the grayish, glaucous new shoots pushing up in the centre, circled by the old flowering shoots which arch outwards, and turn red as they age. Here they were almost a monoculture and would make it difficult for tree seedlings to establish themselves.

I’d hardly noticed it when I stopped the car, but on the other side of the road, with a rusty fence around it, was a patch of almost flat land recently planted with chestnut and walnut trees, almost the only sign of agricultural life for miles, and across the orchard were little dots of red, the first tulips I’d seen. I squeezed under the fence. Each tulip was exquisite. But one was strange. Inside, it looked as if some of the stamens, which were thick with brown pollen, almost encrusted with it, had fallen over and got stuck together. Then slowly, the brown blob began to move, and very slowly  climb up the petals of the flower and show its legs, and I remembered pollen beetles.  Well, I didn’t remember them, I’d never seen them, but I remembered the name, that there was such a thing, and guessed that this must be one.  It was lovely to go from an extensive landscape of ex-forest to a single tulip. And of course when you look through the lens of a camera, everything else is shut out.

Next to the orchard was a little plantation of planted pines, maybe  3 acres. They were growing strongly, already about six feet tall, so that if you walked among them, squeezing between the branches, you could ignore the miles of ruin beyond.  By the roadside was a big old dead trunk, sun bleached.  As it had rotted the old side shoots, which would have been enclosed by the expanding trunk to form knots in the wood, had been revealed again, being more resistant to decay. They stuck out as conical pegs, and each one had rings circling them:

In the end I didn’t have time to get to Polydroso Tsintsina, I headed back towards Kardamili and then home.

ps  Here’s a picture of Euphorbia rigida which I took earlier, somewhere else,  when it seemed a more innocent plant. An allium is growing around and through it.

click here for a link to John Chapman’s blog, a good guide to the Mani

This entry was posted in in Greece, mountains, flowers, landscapes, walks and tagged greece. Bookmark the permalink.