Anavriti (in the Peloponnese again)

(My first visit to the village, in April)

Anavriti lies at about 750 metres on the east side of the Taygetos mountains, which run north-south along the central of the three fingers of the southern Peloponnese. These sentences are difficult to write and to most people redundant. But I often have the desire for orientation, to describe the lie of the land (so that at Lamledra in Cornwall the full moon is reflected in the sea.) To the east and  west of the Taygetos a string of villages lie at roughly the same altitude, below the snows, above the full summer heat.   A rough modern road climbs up to Anavriti from the broad valley of the Evrotas, where Sparta lies, on an easy gradient in bold conspicuous zig zags. But you can walk up the old path through the gorge from Parori, a mile or so from Mystras, and go back down through another one, which is not a narrow mountain track, but a  construction superior to modern roads. Whereas the newly widened road between Exochori and Saidona has already lost whole sections of one carriageway through continuous rock falls, this kalderimi (the name for the old mule paths, rhythm-rhymes with absolutely) is still intact, even though in places fallen stones are scattered over it, so that you walk over flat scree. It’s built into the steep hillside and in places has been constructed on a supporting wall as much as ten feet high.  It’s a construction to rank with many churches, castles and temples. In the 19th century it handled industrial traffic, for Anavriti ‘boasted a flourishing leather industry,with tanneries watered by the powerful springs, and shoemakers’ workshops alongside. There was also a limekiln,  a tile factory, a silk fabrica, an acorn mill (for making tannic dye) and a chandlery. 3000 people (and 20,000 goats and sheep) lived here; now only a few dozen remain, mostly elderly shepherds and returned diaspora from the US.’ (from Landscapes of the Southern Peloponnese, by Michael Cullen, Sunflower books.)

On the internet I found a piece by someone who arrived in this remote village, though remoteness of course is a variable, and was greeted in broad Bronx by somebody who’d returned from New York where he’d made his money in catering, specialising in Bar Mitzvahs, which ties in nicely with the legend (?) that there was a strong Jewish community in Anavriti in the middle ages.  And I found out about a place to stay, which had a few good reviews on Trip Advisor, but when I’d phoned a couple of days before a woman who spoke quite good English, another variable quality, told me that the place was closed, they were in Athens where her husband had  had to go for an operation on his foot. And I couldn’t stay at the hotel on the hill top near Golas monastery, a few miles from Anavriti: George told me that I should have phoned, at this time of year he was only open at the weekends, and he was only there now because he was making the cheese, then he was off back down to Sparta where he had business to attend to. He was on his own, his daughter was in Athens, his son at university in Thessaloniki, his wife was working in Sparta. He had to do everything himself.  It was he who told me how to pronounce Anavriti, with the accent on the last syllable, as we talked about where else I might stay, and watched the newly arrived swallows flying in and out of their nests under the porch, where George had nailed up a few little boards because sometimes the nests didn’t stick on properly and had fallen off. I asked about his big old dog, who wasn’t around, and he said the dog had got into a fight with a wild boar and gored in the face. He too would need to go to Athens for an operation. So I ended up staying in Mistras, in the valley, info@mystras-castle-town.com , at this very nice guesthouse run by Elena who is from Russia.

Half expecting to be greeted by  a New Yorker I was surprised and ashamed when I asked in English at the empty taverna for a coffee and the guy said ‘then katalaveno!‘ For a fraction of a second, pleasure: I understood. He had said, ‘I don’t understand.’  But that was supposed to be my line!   He was the first Greek I had met in a bar or a shop or a hotel who spoke no English. And I didn’t even have my phrase book with me. I managed to say something like cafe helliniki, but it’s not so simple. Because you don’t put the sugar in yourself, they always ask you whether you want it unsweetened, medium sweet or sweet, and there is a phrase for each. Worth learning. And another one: we all shop in supermarkets of course, even in mediterranean or Irish villages. But in Greece they still have all the decent cheese in big rounds, and cut it for you. So definitely learn, ‘cheese, please.’ and ‘that one’. and ‘250 grams’ or whatever.   Of course I then thought he would despise me, for walking into his bar and speaking to him in a foreign language, without apology. The fact is, I’d thrown away my introductory question, ‘do you speak English?’ Because everybody had just said ‘yes.’ But he didn’t seem to be offended. We worked out the sugar business with him holding up fingers.   When he brought me the coffee, he asked me if I was going to climb Profitis Ilias, an easy question since its pyramid was clear from the terrace of the taverna, and I knew the name anyway, so he could just point to it with a question mark.  I managed to get out of that one with the only greek word I could remember which might have useful, and an easy one to remember. Zesto! hot! i.e. it’s too hot to walk all that way. He laughed sympathetically.   But next time I will definitely try harder to learn a little Greek. I found, of course, that when people teach you something, when they say it nice and slowly then listen to you repeat it, and maybe say it again, it starts to stick, whereas when I tried out of a book, I remembered almost nothing. Poli orea! Very nice! The lady at the taverna in Exochori taught me that, and it’s very useful.  Just to be able to say something.

I could understand why they came back from the Bronx. The path I took from Parori led up through a gorge, then over the glaring limestone of dry phrygana and maquis, where spring is over almost as soon as it has begun, and crisped annuals and grasses crackled beneath my feet, then down into a green shade, and backwards into spring, and  streams that once powered the mills, and fruit trees, and waist high weeds.  Honesty half hidden by nettles makes you ask, ‘what are you doing here!’ (like John Clare who was surprised and almost shocked to see  shepherd’s purse, a local weed, growing in an unfamiliar place.) The lushness was astonishing. I felt attacked by that old impulse,  usually connected to a garden, to move in, take possession, restore, weed, light a stove in winter. Places like Anavriti don’t suggest  holiday or retreat they suggest the life of a peasant, they arouse absurd fantasies. At least though, because the fantasy is based on an idea of work, work over a long period of time, with the spade not the bulldozer, and so connects with an idea of longevity – a long life in a village with a much longer life:  to be able to say, I planted that tree 30 years ago! –  because of that, as you grow older you become excluded from your own fantasy, so at least you don’t spend too long entertaining it fruitlessly, as you might have done in your thirties, forties, fifties, or even early sixties.

the Langadiotissa gorge quite early in the morning, the plain of Sparta already hot in the distance. In the bottom left hand corner is the near ubiquitous Phlomis fruticosa

in the gorge above Parori, on the beginning of the path up to Anavriti, this beautiful aristolochia.  I only saw it once.

On a later visit, in June, I found this lily, Lilium candidum. It’s quite common in the gorge, but every flower near the path had been picked, and I had to scramble through prickly shrubs across steep rocky slopes to get near to this one:

Above the gorge you come to the hot, dry hills, dominated by phlomis.  Abies cephalonica, Greek fir, beyond. Anavriti is hidden in the dip. 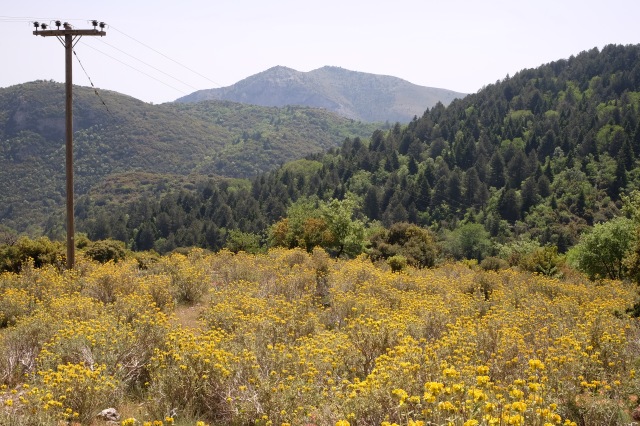 There are some lovely flowers in the scrub. Orchis quadripunctata on a bank by the track:

And Orchis pyramidalis, which can have a very long stem, pushing up through a euphorbia. Euphorbia rigida’s bracts turn red after flowering.

In places less bare, more like maquis than phrygana, with big bushes and small trees, Quercus pubescens, the white oak, was coming into leaf:

Here is a little collection of flowers which are common in  dry, stony places. The umbellifer is  Tordylium apulum, the leaves of which are eaten as part of the famous ‘horto’, wild greens;  there’s a scabious in front of a phlomis:

Then you come to a chapel under a big old plane tree at a junction of paths. The plane leaves were also surprisingly lush and delicate, you would think they were in danger of being burnt up by the sun:

Under and near the plane tree was a big carpet of these flowers, acinos I think.  And these too:

The path then leads down, and suddenly you’re in green shade: 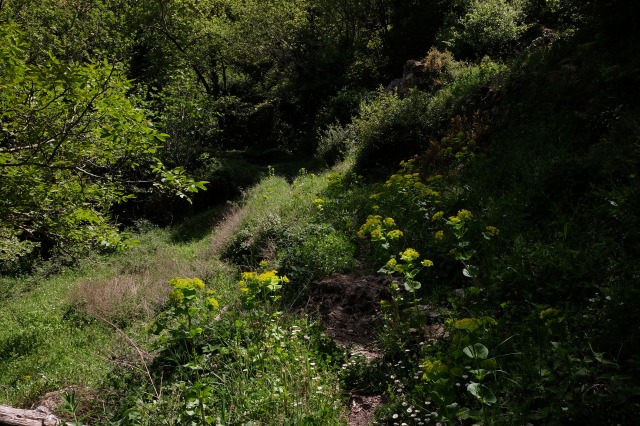 And then you find yourself at the ruined end of the village, which stretches out along the hillside. There was nobody about. 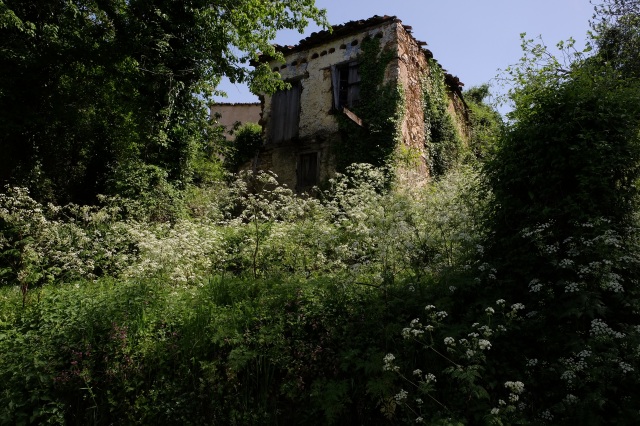 It was already getting late in the afternoon, I had to go on. And I was annoyed with myself for knowing no greek.  I would have liked to stay there. I didn’t even see half the village: I looked back and saw the church tower for the first time.  The path out of the village led through beautiful woodland towards another gorge. Coming into Anavriti, the village had been hidden, now it was spread out before me on the hillside when I looked back:

I came across Orchis papilionacea again (with a friend), the first time I’d seen it growing in woods:

Then it was onto the amazing mule track that runs down to the valley along the side of the gorge, to the narrow road which runs through olive and orange groves for about three miles back to Parori. This isn’t a very good photo, but you can see part of a built up section of the track:

A gorge, or a steep, rocky mountain valley? – I could do with some words for different types of gorge, like the ones in Macfarlane’s glossaries in his book ‘Landmarks’, for different landforms; from the precipitous, narrow ones like enormous crevasses, to the green ones with woods on steep slopes, some scree, possibilities for scrambling down –

And another orchid, of course. We call it man orchid, the French call it the hanged man. This one’s a hoodie hanged man: 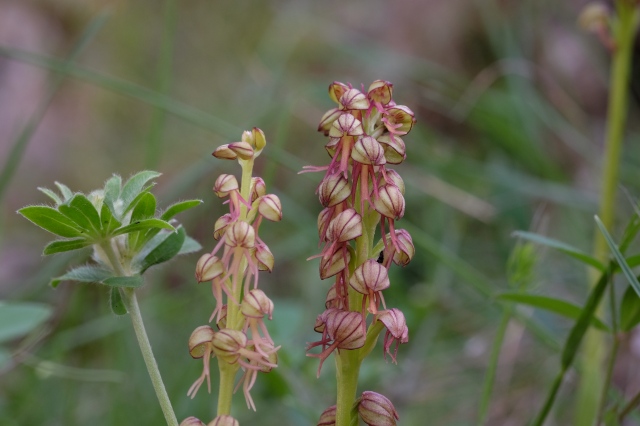 I didn’t know this at the time but the place to stay in Anavriti, the only place in fact,  but it’s wonderful, is the Guesthouse Arhontiko; here’s  a link:  https

This entry was posted in in Greece, language, mountains, flowers, landscapes, walks and tagged Anavriti, greece. Bookmark the permalink.

1 Response to Anavriti (in the Peloponnese again)