Poor old Dad. No one said, he loved this place, let’s give him a bench. I remember vividly, although maybe it’s the photo that I remember, over the compost heap at Tufnell Park Road was draped my father’s old dressing gown, in colours of heather, comfortable in a rough sort of way, and above it there hung swags of clematis, the common and splendid C. jackmannii ‘Superba’, flowering in July and August. Give it good soil, sunshine up above and shade at the roots. Let it scramble through a big shrub rose. 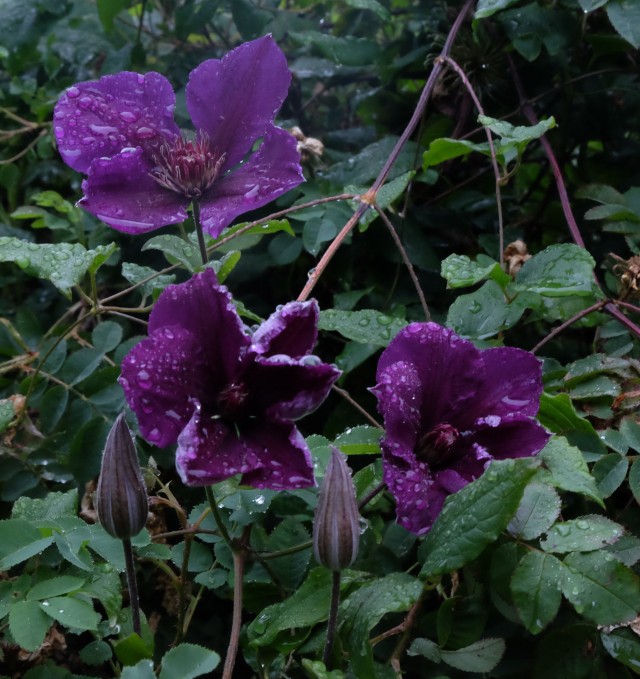 Cut it back hard in late winter, or earlier if it’s a mild one. cut to a strong looking bud at two to four feet high. The deep purple flowers look fabulous lit from behind. Plant for the morning, open to the east, or for the evening, open to the west. It’s rare to find a city garden, however big, that’s open to sunrise or sunset. I have a window to the west which gives me a glimpse of cyan after sunset.  But this photo was taken at dusk on a wet evening, a few days ago, as the first flowers began to open.

Here is a plant I was sold as Geranium ‘Splish splash’, which it obviously isn’t. Not a splish or a splash. I googled it, and it’s supposed to have streaks of colour against the white. This is what they call not coming true from seed. Its full name is Geranium pratense ‘Splish splash’, so it’s a chance variation which can only be replicated through cuttings, so that the new plant is a clone of the old. Sexual reproduction on the other hand leads to genetic change. Sometimes we wish our children would come true from seed, but of course they never do.

So-called Splish Splash disappeared long ago from its original place and pops up in cracks in the paving stones, always white now, and never with streaks. This one is growing in an invisible pot. Often an interesting, vigorous plant appears in a pot, and eventually you have to decide whether you will allow it to suffocate its host, a bit like a cuckoo.

I’m not complaining about miss-selling, as the one I originally bought cost 40p at a plant stall with an honesty box in Gorran Haven in Cornwall. The actual Geranium pratense is violet-blue, it’s the geranium which is still common in some areas on roadsides and meadows, flowering round about now.

Many species have the occasional white variant. Here is an amazing expanse of red campion growing in what was recently woodland, near the Kennet and Avon canal in the Vale of Pewsey in Wiltshire.

The briefly beautiful nettle-leaved bellflower, common in gardens and an enemy to some, normally blue, will sometimes be white. While it is sturdy, the white variant of Geranium phaeum, often found in garden centres, tends to be weak and sickly, as if the genetic change comes at a cost. I’d avoid that one, the whole point of Geranium phaeum, aka the mourning widow, is its little deep purple flowers, almost black in a dull light and glowing bright if they catch the sun. Which as shade lovers they rarely do.   This one did! The photo was taken in April, with a macro lens; the flowers are actually very small. You could say they don’t really look like this, but this is not the time to talk about reality. 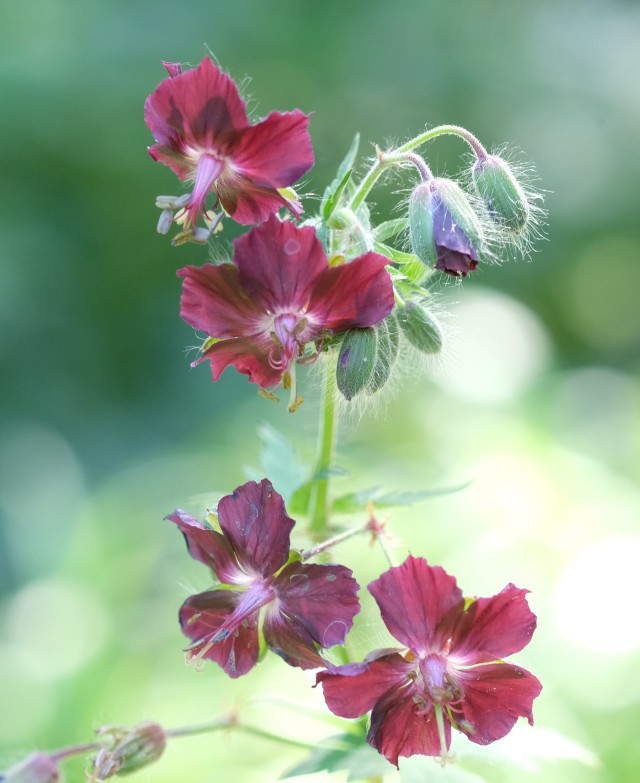