Spring is intoxicating but summer brings headaches.  The leaves on one of my lovely Salvia patens look like a cross section through a diseased lung. After the hot spring, exile from the greenhouse for the morning glories was like going from the mediterranean to Scotland.  And the new lilies I planted up in the autumn, White Heaven it’s called, which have grown splendidly both here and at St John’s, came to look too crisply perfect, too big and bold, and they began to remind me of the Kardashian building, which is maybe the most outrageous of London’s new buildings since the so-called walkie talkie which is better named the Fuck-Off building. (By the way, that’s its message to the world, I’m translating, not swearing.)

above, the Kardashian building from St John’s, Waterloo – like a true celebrity, it’s everywhere. below, Lilium ‘White Heaven’ in my garden. 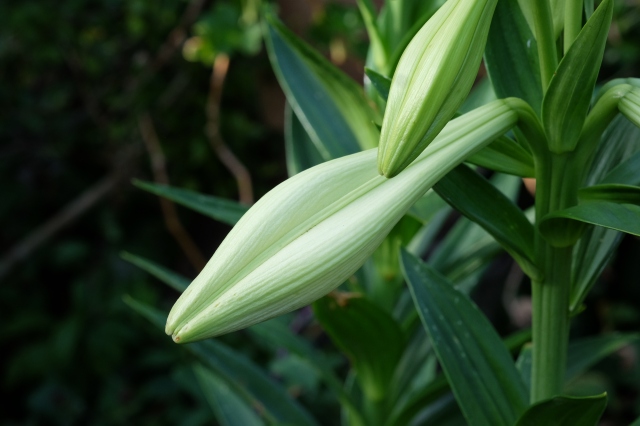 My hallucination faded to whimsy when the lily opened. It needs to be softened by greenery. 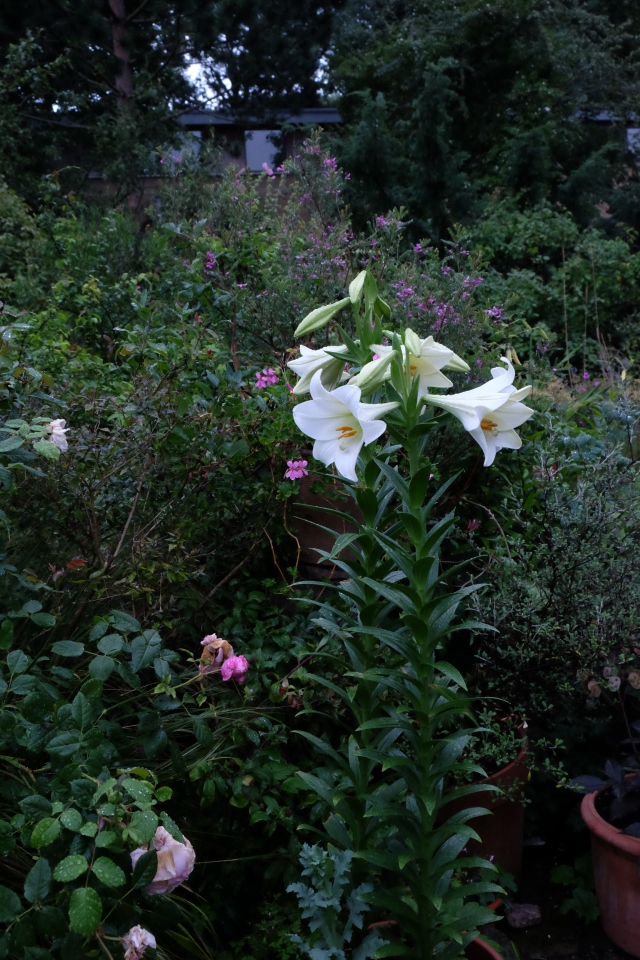 But it made me nostalgic for the Lilium candidum I saw in Greece. A path leads up along the side of a gorge which takes you from orange groves in the plain near Mystras up into the Taygetos mountains. Every lily near the path had been picked, but I saw one or two on  a steep and tangled rocky bank and managed to squeeze and crawl towards them.

But if you want a crisply engineered plant here’s a leaf of Melianthus major: 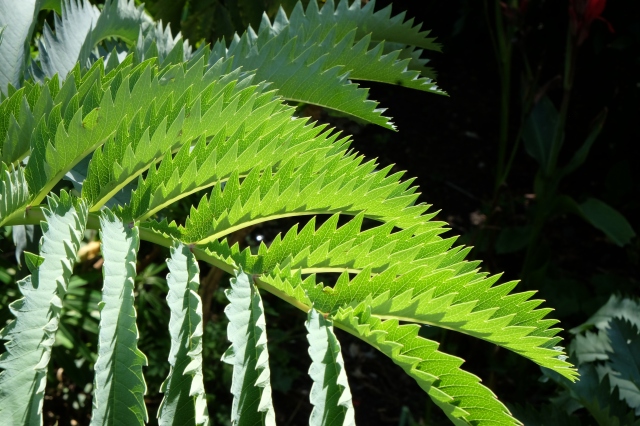 For a view of the whole thing see Garden notes no. 23, at St John’s Waterloo

And since I can’t claim to free from garden boasting: years ago I was talking to a nurseryman somewhere in Hertfordshire, and telling him that I was looking for plants to grow in a community garden in central London, where the micro-climate brings special advantages, and he said, yes, just opposite the Old Vic he had seen the biggest Melianthus  he had ever set eyes on, and I said yes, we planted that!  (That was at Emma Cons garden which became both a triumph and a disaster, a story for another time. How dreary and neglected it is now.) As the melianthus grows up the lower leaves wither but cling on. Stripping them off is satisfying. When it becomes too tall and leggy you can cut it back hard in spring, it won’t object.

Here is Eryngium bourgatii with a confusion of Stipa tenuissima. ‘Give it a good haircut’ is the pruner’s cheerful cry – a bit annoying too, do they know what they’re talking about?

But this stipa sometimes needs, not a barber but a coiffeuse, to brush gently, not cut. Although, as with the dog, little fluffy tangles may need to be cut out, since they quickly weave and dreadlock together. Number 23 showed a picture of the eryngium with an erigeron and this year it has given rise to other nice combinations, here it is with a tulbaghia: 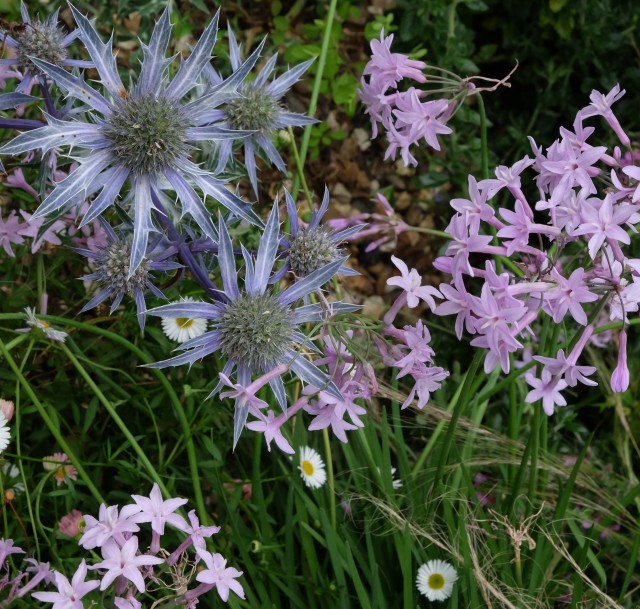 The tulbaghia comes from South Africa, the home of so many bulbous plants which don’t like it too cold but on the whole enjoy their exile here, like agapanthus and nerine. It grows into a sturdy but dainty clump with evergreen leaves and flowers intermittently all summer and into the autumn. This one is Tulbaghia violacea, the most widely available. In the bottom right hand corner you can see another scruffy tuft of the stipa, which is common in the Alps on dry, stony slopes at low altitude.

Here’s a healthy Salvia patens from a couple of weeks ago. True blues are rare. It dies right back in winter and needs to be kept in a frost free place. Until the other day I would have said it was an easy plant to grow.

For weeks hardly any birds came to the feeder, but now they’re back. The tits suggest a design for this confused garden by the calligraphy of their flight paths, their routes to and from the feeder linking a series of strategic tips and shoots which tremble slightly as the birds alight.

more later to make up for my recent absence.

This entry was posted in gardens, in the City. Bookmark the permalink.