(and isn’t it infuriating how they keep turning adjectives into pretentious nouns?)

I wrote about my search for the epic, vibrant South Bank here: new outrage in SE1. I’ve been there a few times since, always hopeful.

The mix of heritage and culture is still creating a vibrancy, as you can see, and the jam-packed, fun, glamorous, madly expensive flats are growing. I wanted to take some photos of people enjoying or even helping to create the general vibrancy. Here they are in Jubilee Gardens:

Ok, it’s not their fault that absurd claims are made for the South Bank.

I looked again at Jubilee Gardens. To be fair, they have succeeded with a few flowers. This is Rudbeckia ‘Goldsturm’, I think. Dependable, if not allowed to dry out. Undeniably colourful:

But they haven’t learnt anything about pruning. People often say, of cutting back a shrub, give it a good haircut,  but not a flat-top for goodness’ sake:

There were weeds growing more cheerfully on Hungerford Bridge. This is a plane tree:

And on the unfashionable north side of the river, in Embankment Gardens,  the City of Westminster (ok, they can afford it) have kept alive the traditions of summer bedding. The Jubilee Gardens blurb talked about taking their inspiration from the Royal Parks when a stroll over the river would have shown them how it’s done. They’ve even got bananas: 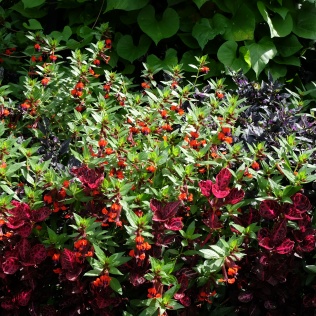 Not that anybody seemed to care very much…

And there’s yet another war memorial (see back on familiar ground) in those gardens. This one’s really cute: 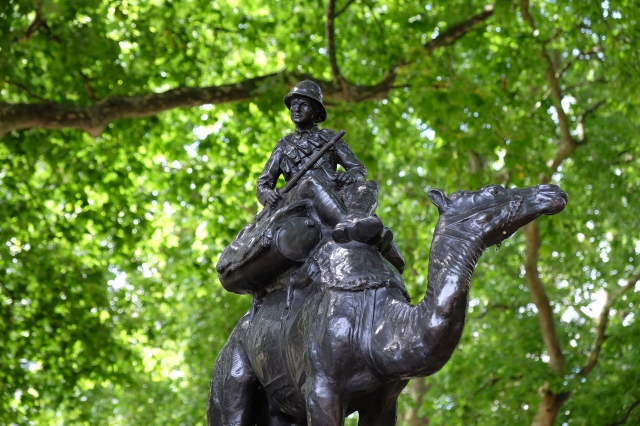 and look where he’s been – it’s the same old places…. 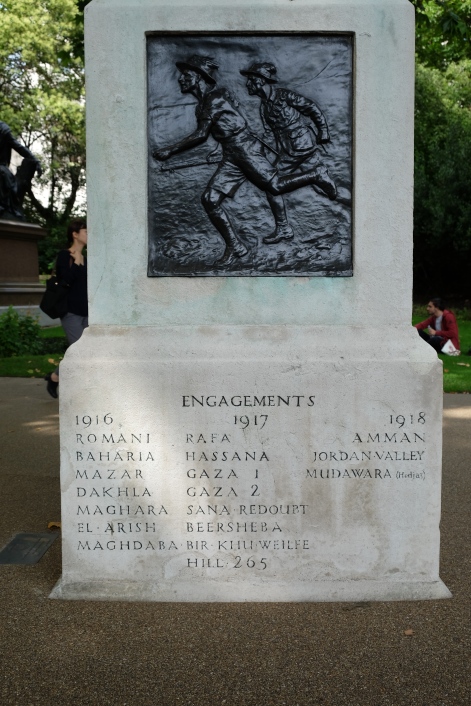 I was back on the South Bank today, working in the gardens at St John’s church in Waterloo. Here’s the endangered church tower and the Shard seen from the exciting Shell development, a view which will not exist for much longer: 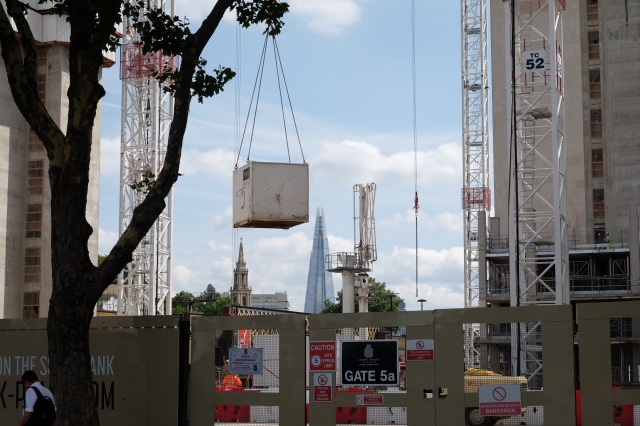 Then I walked by the river a little way. Guess what this is: 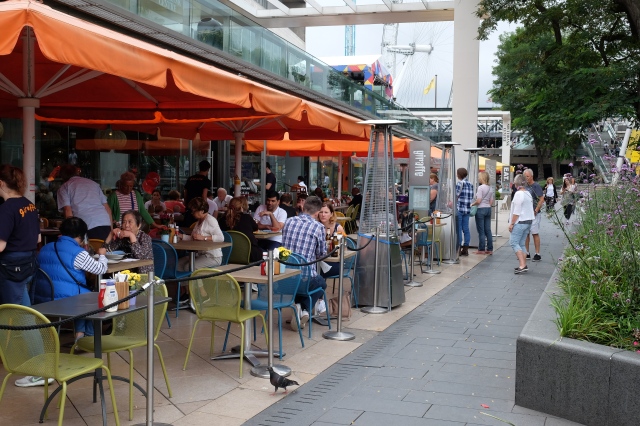 It’s the front of the Royal Festival Hall, which used to look like itself until they decided that we needed lots more places to eat and drink coffee.  You could actually walk right past the Hall and not know it was there, Yo! Sushi! Eat! Giraffe! Wagamama! they shout.  But I finally did discover real excitement, real fun. Outside the Hayward Gallery is an array of those popular pop-up fountains and drenched-to-the-skin fully clothed children were running excitedly in and out, one still wearing his yarmulke. But as soon as I pointed my camera at them a man in uniform came up to me and told me that photography was not permitted. He told me he didn’t know why, and no, of course he wasn’t accusing me of being a paedophile, and that there was a notice which explained everything. So I took a photo of the notice instead, but it didn’t explain anything, it just said that photography was not allowed. I argued a little more with the security man and as usual ended up feeling sorry for him, because he was somehow stuck between me and his boss, only doing his job, and he would get into trouble if he didn’t do it properly, and I wished I hadn’t added to his embarrassment by pointing out that someone, almost certainly a mother was busy taking photos of wet children – were mothers and sisters and aunties and grandmas exempt from the rule? Were families exempt? The fact that she was allowed and I wasn’t seemed to make it clear that rather than one big fun-loving, multicultural, vibrant community, on the South Bank there were families, and there were strangers.  Actually, he said he would speak to the woman too (she’d already taken loads of photos) but I went off before he could do so, so I didn’t see what happened.

After that it was back to taking photos of weeds again. Here’s cudweed on the bridge, apparently getting by on dust and rust: 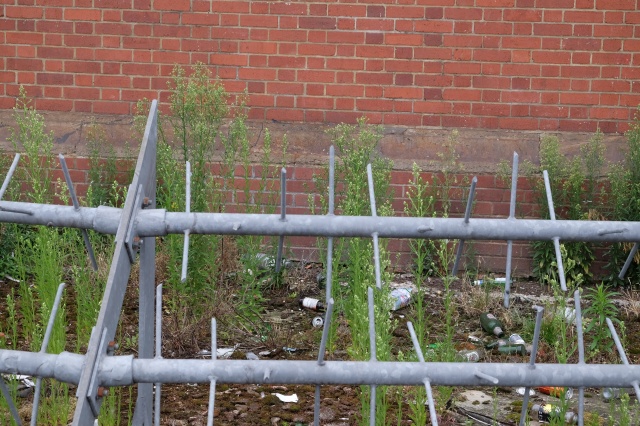 Then a pause to admire more epic Westminster bedding near Embankment tube: 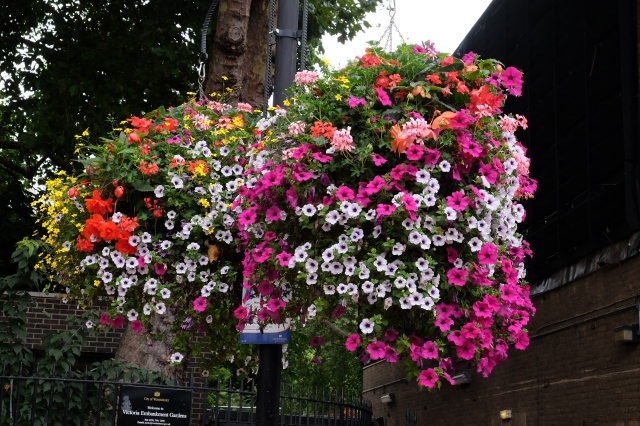 and off to Marks and Spencer’s in Oxford Street. So peaceful. A haven from vibrancy. Especially the men’s underwear department. Don’t know any more if I’m medium or small, (ok, small, but I like baggy clothes) so I bought both. Looked for a shirt. Loads of L, XL, XXL, even XXXL. Scarcely an M or an S in the whole store.  Couldn’t decide whether this is because there are so many of us that they’ve sold out, or hardly any so they don’t bother to stock them. Thought about asking but didn’t. And anyway, a person ought to be able to come to some conclusion about how big men are these days without having to study Marks and Spencer shirt sizes. In fact, though there are lots of big natives, plenty of tourists from the middle east and the far east are still slim. A memory – Rosie and I were walking through vegetable gardens near Dali in Yunnan, hundreds of allotment sized strips laid out on the fertile soil by the lake – years ago now, when she was studying Chinese at university  – and we met three charming elderly men relaxing under their fruit trees.  One of them said to Rosie – it was so amazing travelling through China with her, relying on her, my translator – that I looked Chinese. This surprised both of us until he explained that it had nothing to do with my features, it was just that I’m skinny.

Home on the tube. Metro headline: LEAVE MY DAD ALONE SAYS HARRY. How sweet. I think that’s what Henry V said about his father when he came of age and rejected Falstaff. It’s family see.  Although the English/British royal family have a history of murdering their own as well as other people.  An advert told us to download 4000+ Disney TV episodes. That would be an entire childhood spent watching Disney! They’d never leave home because there were still more episodes to see!

At Finsbury Park bus station there were some Chinese people. I thought – this is another foolish generalisation – they do age well, the Chinese, alert, upright, light on their feet. Must be their diet and all those special exercises. Wonder if I could be like that. Thinking again about the Festival Hall sheathed in commerce I suddenly remembered my brief trip to the British consulate in Milan in 2012 when I’d lost my passport. I had time to have a quick look at the cathedral which was in the middle of extensive repairs, and this is how it looked: 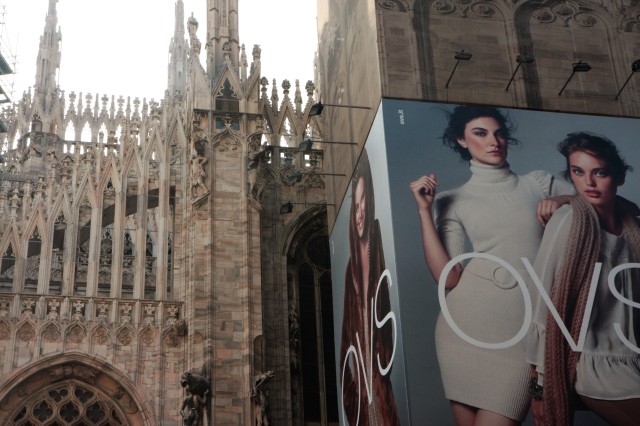 Those papists! This is what they sell now they can’t sell indulgences. I should have listened to my grandmother, over in Ireland.

This entry was posted in and the city, crude satire, hilarious, language, walks and tagged St John's, vibrant, Waterloo. Bookmark the permalink.