“Abies cephalonica Grecian fir. Large evergreen tree to 30m with a pyramidal crown and dark brown bark tinted with orange, becoming darker and fissured with age; twigs hairless and buds very sticky. Leaves needle-like, spreading, thick…. Mountain slopes. May-June. S. Balkans, where often forms extensive forests; planted in Italy, occasionally elsewhere. Often host a to a sub-species of the common mistletoe, Viscum album subsp. abietis. An important timber tree for the ancient Greeks; today areas of fine forest of this species are carefully preserved and encouraged to re-seed, although some trees are still extracted for timber.” (from Wild Flowers of the Mediterranean, Blamey and Grey-Wilson.)

Patrick Leigh Fermor’s Mani, Travels in the Southern Peloponnese opens with an account of his painful trek over the Taygetos mountains from Anavryti in the East to Kambos in the outer Mani, in the West. He doesn’t do dates, but it was evidently late spring or summer, because the heat makes the journey purgatorial. The rocky landscape of the high mountains is ‘a vast slag heap’. ‘Rivers of sweat streamed over burning faces and trickled into our mouths like brine.’ And at the edge of the ‘Grimm-like and Gothic forest of conifers’ … ‘we were faced by an unattractively Alpine wall of mineral: pale grey shale and scree made yet more hideous by a scattered plague of stunted Christmas trees.’

Everybody needs something to hate. I’ve just remembered a customer of mine who told me she didn’t like yellow flowers. Not liking yellow would make much of the world painful. I’ve picked cordylines and phormiums. (see phorms and cords.) Even in pictures from their native New Zealand phormiums look gross and clumsy to me. ‘Alien’ and ‘native’ are the technical botanical terms: just as to me the phormium looks like an alien even where it’s a native, so Leigh Fermor cannot distinguish Abies cephalonica, native of the south Balkans, from Picea abies,1 the Norway spruce, the Christmas tree,2 which is native to northern Europe and also as far east and south as Albania. Is it the curse of Christmas which has so stamped an image of this tree in our memories that we cannot see it as it really is? Grim and gothic culture blinding us to nature? Interesting that a plant which is actually endemic, a proper pure native, can be perceived as an alien.

And how can a scattering of feeble trees in extremis be described as a plague? The plague in the Taygetos is found in the other conifer of the forests, the pine tree Pinus nigra, which is attacked by swarms of processionary moth caterpillars.

Suddenly remembered something I wrote years ago: I’ve been writing the same stuff for about thirty years on and off. I came across a book called A Colour Guide to Rare Wild Flowers by John Fisher, which is as much about places as it is about plants. For example, ‘cypress spurge seems to show a partiality for places where race horses are trained.’ The sand catchfly likes sandy soil with good drainage and some calcium and ‘can often be viewed from outside Littlehampton golf course through the barbed wire perimeter fencing’. Of Jacob’s ladder he says that its ‘true appeal comes as much from the remote rocks and ravines in which it sometimes grows as from the plant itself: characteristics which proclaim it as a truly native species and not a garden escape’.3 And of the spiked star of Bethlehem he says that in spite of its ‘ornate, almost rococo good looks’ it ‘is a genuine native species.’ This led me to think about the idea of ‘the plant itself’:

It’s hard to tell a true native from an alien, and it’s hard to see the plant itself for all the rocks and ravines – and barbed wire perimeter fencing. In fact there is no ‘plant itself’, no ‘plant as it really is’.  The plant is always a photograph in a book / a weed / a hybrid / lovely in association with snowdrops / a harbinger of spring / hung up to dry / the only living thing for miles around / a metaphor / a name / an illustration of how well yellows and grey-greens consort / under threat / invasive / common or garden / poisonous / mine / a cure for cancer / a hallucinogen / an alternative to speech, etc.

And as a perfect illustration of place over plant, in the OED under ‘garden-gate’ I found ‘also used dial. as a name for herb robert, the pansy and London pride’. John Clare was shocked to find shepherd’s purse, a plant whose whole identity was connected with his own village, growing quite happily in another place where he was a stranger.

I came to Abies cephalonica by a different route, from the burnt out forests of Parnon, the mountain range to the east of the Taygetos, still largely a great crematorium ten years after the fires which devastated them in 2007. See in the Peloponnese . I then rejoiced to see the forest of mature fir and thickets of energetic young saplings and seedlings in the southern Taygetos. They were like a token of Eden.

As for their being stunted, trees in the mountains at their upper limit are always stunted. They’re at the boundary, which is a hard place. It’s not a fixed boundary: you can see it move up all over the Alps as the climate grows warmer. You can see it move down as drought and fire and goats take over. Goats love eating trees. They prune and lop and trim like obsessive gardeners. There’s a picture of their work on another mountain, Chelmos, to the north of the Taygetos, at the end of this piece.

When P L F and the patient Joan (his wife, I think, who occasionally appears in the book in a ghostly kind of way) finally get to the top of the ridge, from where the long hot descent through a gorge begins, he miraculously finds himself on ‘a smooth green lawn scattered with flowers and adorned by a single cistus clump with a flower like a sweet-smelling dog-rose’; the odd plant name does appear in his narrative. But cistus in Greece doesn’t grow above about 1000 metres at the most, and here on the ridge we are over 2000 metres. An often dramatic feature of mountain walks is the way a plant so dominant at one altitude can completely disappear with just a small change in altitude, so that each phase of the journey takes on a different character.

There is a kind of security in categorising and naming. I like to be able to divide the Greek fir from the Caucasian fir, and the Norway spruce from both, although my knowledge of conifers is very limited. Patrick Leigh Fermor writes about slaves and pirates, hats and cats, dolphins and storks, pistols and swords, byzantine icons, paladins, fustanellas, Greek nautical terms derived from Italian, shaggy hordes of goats, and words: words lead him across Europe and into Asia, back to the worlds of classical Greece and Byzantium, guide him through all the complex detail of the history of the Peloponnese. Here’s a sentence more or less at random – ‘their long-barrelled guns, which resembled Afghan jezails…. had a euphonious name, which sounds more like a flower than a gun; indeed, very like the Greek for both carnation and clove: karyophilia. This strange and musical word is an uncouth Hellenization of the name of an Italian gunsmith’s shop whose wares were highly prized all over the Levant: Carlo e figli.’

But like almost all contemporary visitors to Greece, he’s into the sea, not the painful mountains, and he seems curiously unaware of the huge variety and complexity of Greek plants. But he knows what he likes. Safe and sound after the horrors of the Taygetos and on a boat sailing down the coast he sees the village of Trakhila ‘backed by a blessed dark screen of cypress trees. It is strange how certain trees can civilise the wildest landscape in the same way that a single spruce or Christmas tree can barbarize the most amenable in a trice.’ One plant though does make an entry into his book with its latin botanical name, in italics: campanula tayloria, although it only appears as a botanical back-up to to the idea that on the islands and in remote provinces of Greece isolation has led to separate social development. And it’s an endemic, of course. (see endemics).  Well, they must have changed the name of it, google has never heard of it. The only reference is to that page in Leigh Fermor’s book. But they are a puzzle, those campanulas, so many different ones with such slight differences. Polunin’s Flowers of Greece and the Balkans, a book I bought to help me identify plants but which often encourages me to give up the attempt ,says of campanulas, ‘a large and often difficult genus with about 90 species in our area of which more than 50 are endemic’. The mysterious ‘tayloria’ is probably one like this, (see picture at the end) a gorgeous rock lover, just as much at home on walls and ruins as it is on natural rock faces, and found, with various tiny variations all over the Peloponnese.

Last Christmas there was an entertaining and well informed article in the London Review of Books by Alice Spawls on the culture and culture of Christmas trees. But she said that it takes ten weeks to grow a christmas tree. In fact it takes about ten years. So that’s a pretty big mistake. If you could grow a christmas tree in ten weeks, you could grow a 100 feet high spruce in ten years. All our houses would be made of dirt cheap wood, everybody would have a clean-burn wood stove, carbon capturing power stations would be fed by train loads of timber. Or the price of wood would be so low that no one would bother – I can’t do the economics. I thought about writing in. But I’m aware that pedants watch the LRB for errors just so they can write a letter to the editor, so I waited for someone else to. I’m a pedant too, in a very small way – I mean I don’t know anything like enough about anything to be a proper pedant – but I don’t want to expose myself as one. But no one wrote in, and no correction appeared. I went to the website. It’s still there. That egregious error! Maybe next christmas I’ll write to them.

We see the botanical blind spot in online dictionaries. When you write them, all plant names are immediately underlined in red, and ridiculous alternatives offered. For cordylines: borderlines, corninesses (sic), scoreline, cuddliness etc..

For beautiful photographs of flowers in the mountains of Greece, have a look at this website., Greek mountain flora.He has pages for each group of mountains and gives the date of each photo so you can find out when is a good time to look for particular flowers. And for non-botanists like me, knowing that a particular flower on a particular mountain is, for example, Crocus sieberi, helps you to identify it from all the other Greek crocuses.

1The botanical name hints at confusion: ‘Picea’ is the genus spruce, ‘abies’ is fir. Picea abies is the fir spruce.

2 or at least it was until its recent uprooting by Abies nordmanniana, found from northern Turkey to Azerbaijan, whose needles do not drop.

3because, as I read now in ‘Alien Plants’ by Stace and Crawley, it is both: we have the remote natives and the garden escapes close to home.

a few photos. This is a young Abies cephalonica which has sprung up in the burnt out ruins of a forest on Parnon. The pine does not have the same ability to recover.

mixed forest of fir and pine on Profitis Ilias, the mountain Patrick Leigh Fermor crossed. Remind you of Christmas? 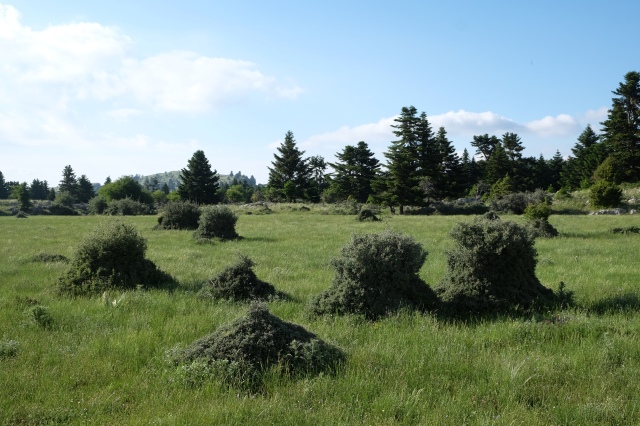 and this is a rock-clinging campanula which I think is more or less exactly the mythical campanula tayloria: