in the Peloponnese again (Ziria, aka Kyllini)

Ziria – what a tasteful mountain! 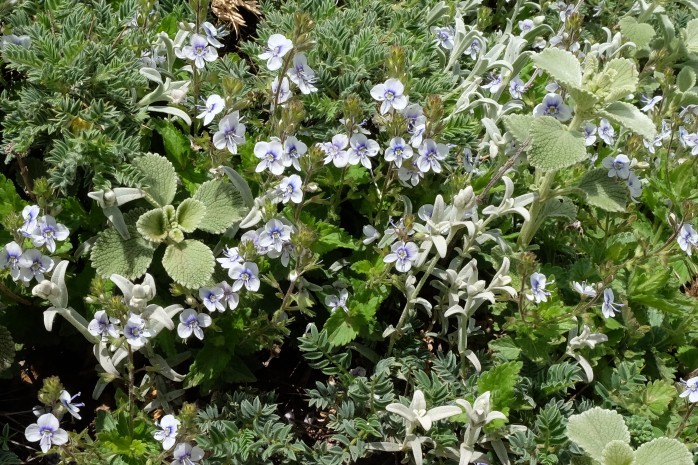 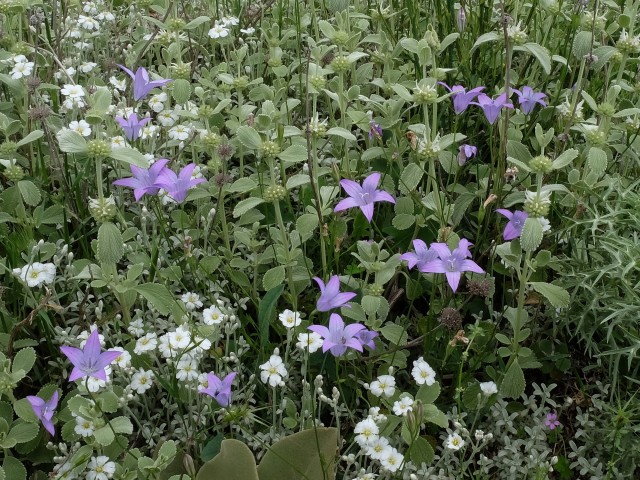 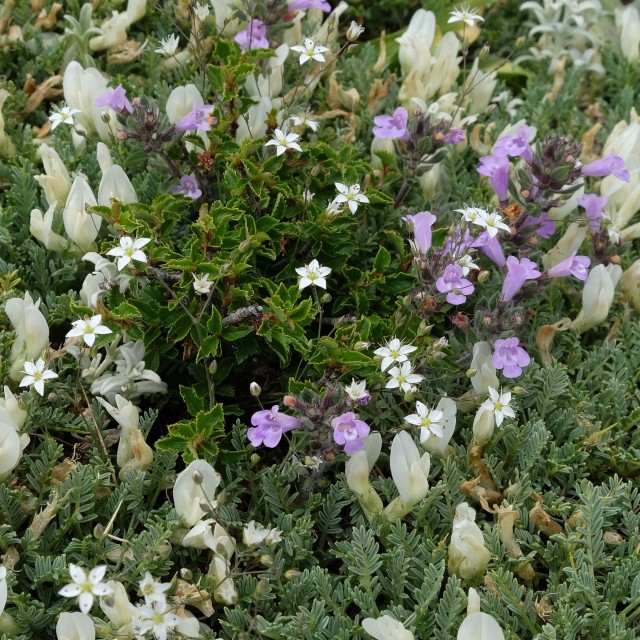 Ziria or Kyllini, it has both names. The whitest mountain, and without snow: white limestone, silvery grey leaves of cerastium, which we call snow in summer, with its white flowers, grey leaved white flowered achillea, which Achilles used to staunch wounds, ornithogalum, star of bethlehem, with glistening white flowers, mounds of prickly astragalus and sweetly scented daphne oleoides, their white flowers opening at the beginning of June, more soft greys in the leaves of verbascum and marrubium, a beautiful very pale blue veronica, lots of starry little arenaria cretica which has relatives in Yorkshire, and the similar but more dramatic snowy white mounds of minuartia juniperina. I was glad that, for most of the day, the sun wasn’t shining.

In my photos the plants shimmer in and out of focus. I’m becoming aware that the area of close focus in my “varifocals” is too small. It’s better if I look through the reading glasses I got at the chemist’s. If you hold your darting gaze to a single spot (when you look at a ‘view’ your eyes are rarely still) you realise that the area on which you can focus is actually very small. There down the garden is a single shoot of grey leaved buddleia around which the other plants, near and far, all swim in a tangle. You have the illusion of seeing the whole picture because your eyes are constantly moving.

The place I’m thinking of is not high on the mountain. A road leads from Ano Trikala up to the little ski centre which is set on a high rolling plain at about 1500 metres. A rocky gully leads up to a pass, a narrow plateau at about 1800 metres, below the peaks which rise up to 2300 metres. This saddle, rocky but with pockets of reasonably deep soil, is a fruitful meeting point. It would be where, if you followed the daft suggestion of the outdoor gear shops, you would change from “approach shoes” to proper mountain boots. It’s high enough for the first dainty alpines to appear in cracks in the cliffs and rocks, low enough for there still to be big thistles, verbascums and lots of other plants from what the French call moyenne montagne, mid-mountain. And at the beginning of the walk lots of a beautiful bell flower, Campanula spathulata, common in sun or shade all the way up to about 1500 metres, tall with very thin wiry stems and hard to photograph because it’s almost never still.

It’s not all greys and whites of course. Scatterings of soft pink from lamium garganicum, a dead nettle just as happy in the glaring open as it is in shade, geranium tuberosum which pushes up through low shrubs, and the ubiquitous and confusing acinos and its subspecies, which some call satureja, common also in the Alps. Viola graeca is a pale blue. A delicate centaurea, knapweed, is violet-blue. Yellow is scattered about: lysimachia serpyllum which is creeping jenny, familiar in our gardens, but not so able to run about up here, dainty yellow wallflowers, small, intensely yellow helianthemums, an elegant buttercup. Just a little further on where patches of snow have just melted a few crocuses have opened on the brown, still dormant turf. Then on low cliffs above those gullies the first true alpines, lovers of the rocks: little mats of soft pink asperula boissieri, a relative of sweet woodruff and ladies’ bedstraw. And there’s another bedstraw among the rocks, up to about nine inches high, with tiny flowers but a powerful perfume. Red is rare, but there are spots of deep pink in rocky gullies from geranium subcaulescens, familiar from British rock gardens. I’m sorry about the latin, but then I also think, you got used to Zlatan Ibrahimovic, what’s so difficult about lysimachia or asperula?

It’s a gardener’s mountain, remarkable not for its rarities and endemics, though it has them, and I would have seen more of them if I hadn’t got stuck on the lower slopes, but for its associations, its meetings between plants of different habits and habitats. I wonder how some of those associations would develop – would one plant gradually become dominant, a newcomer drive out its host? Or are these relationships stable? Will ornithogalum, cerastium and astragalus continue to live together, the shining white, the chalky white, the brilliant white, with a few pale pink geranium flowers pushing up through them?

Much more exciting than the white garden at Sissinghurst and I didn’t see a soul all day, except, on the way down, two children outside a little house, some way off, where there were sheep and goats, I called out hello, they said hello and vanished inside.

When a plant is most at home it’s often able to keep out the neighbours. Isolation on the rocks is part of the attraction of the high alpines. They thrive where nothing else can. Rare plants can be so common in these difficult places that you forget that they are only to be found on about 0.0001% of the earth’s surface. You can tell that I just made up that figure.

When I look again at my photos, and read what I’ve just written, I realise that it wasn’t as white as I imagined. Again the photos show up the limitations of my memory. But then the photos themselves can make no claim to be representative. The white expanses could have been passed over in favour of gleams of yellow or pink.

I have gradually come to feel almost that if I haven’t taken a photo of it, I haven’t seen it. This feeling is strengthened by the weakness of my memory. Things unphotographed fade, photos last. Should I just ‘post’ the photos and forget about trying to describe in words?

It’s not a mountain I would find so interesting if I wasn’t interested in the flowers. North west Scotland is more dramatic. The mountains of the Alps are higher and more exciting. 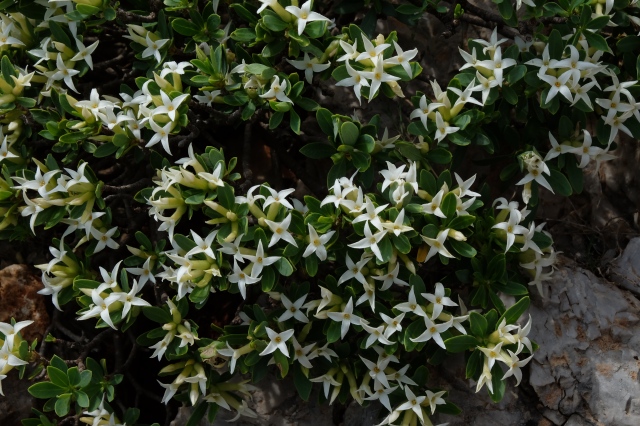 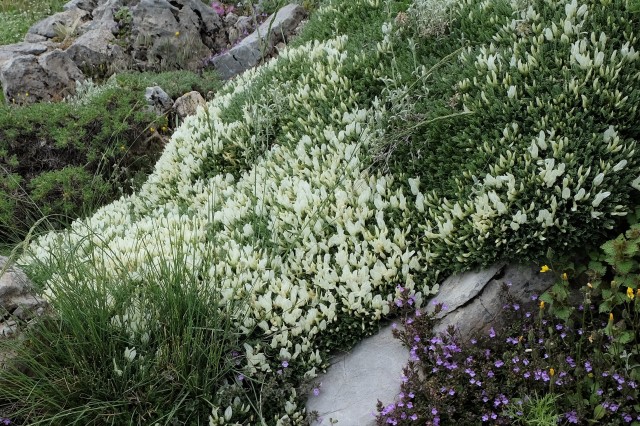 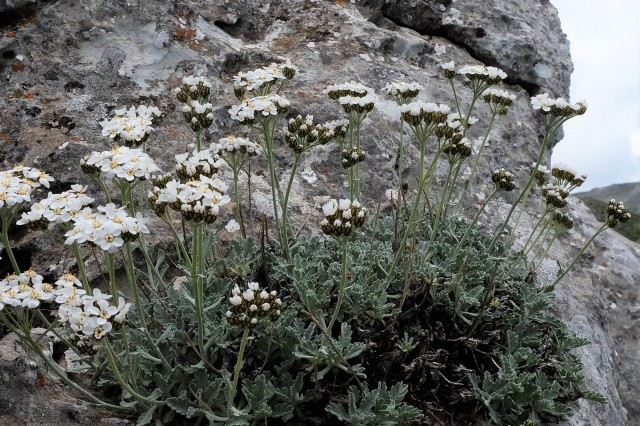 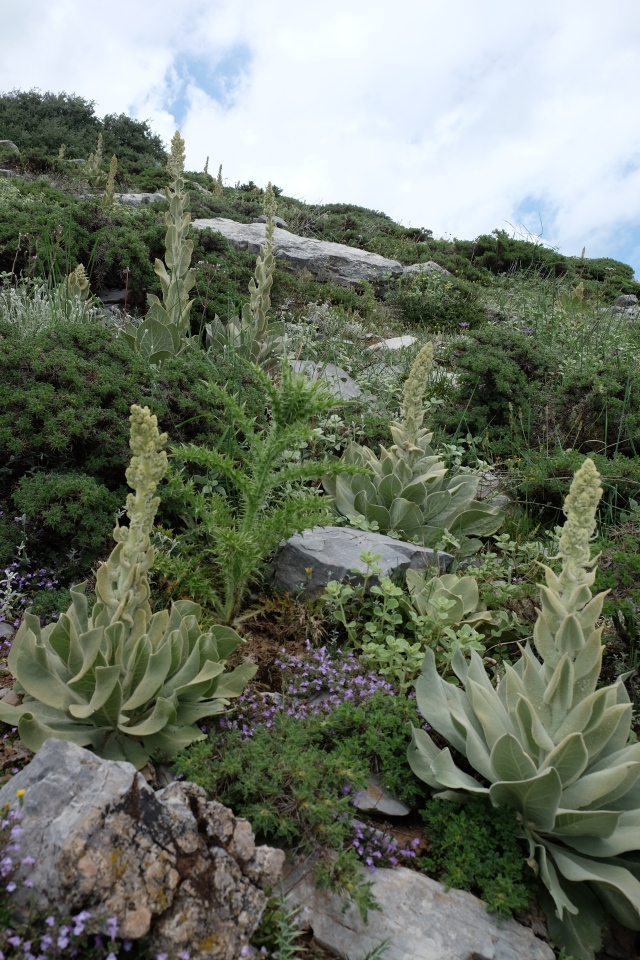 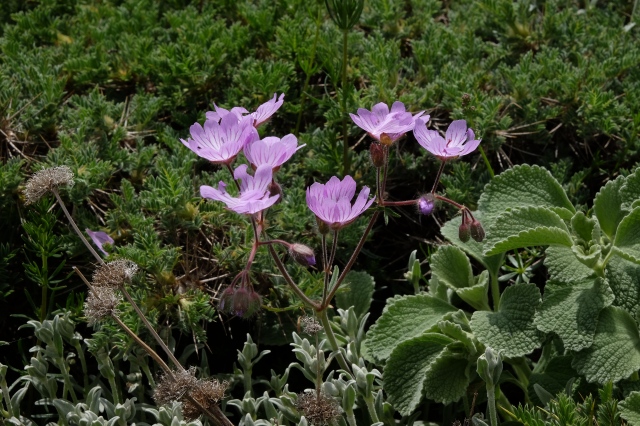 Geranium tuberosum with Marrubium cylleneum, named after this mountain 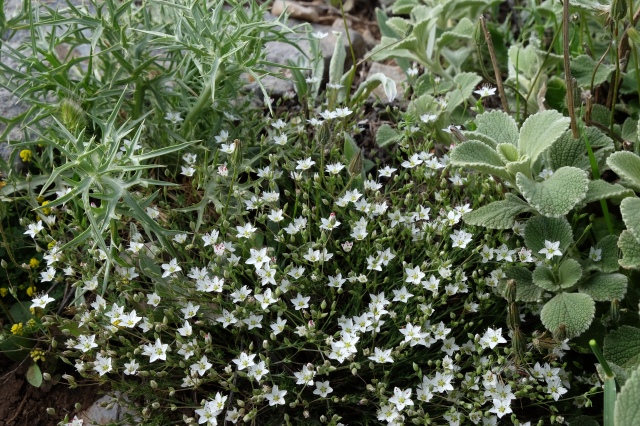 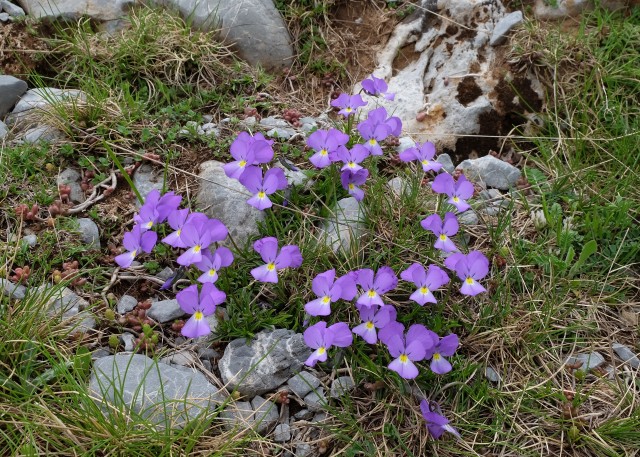 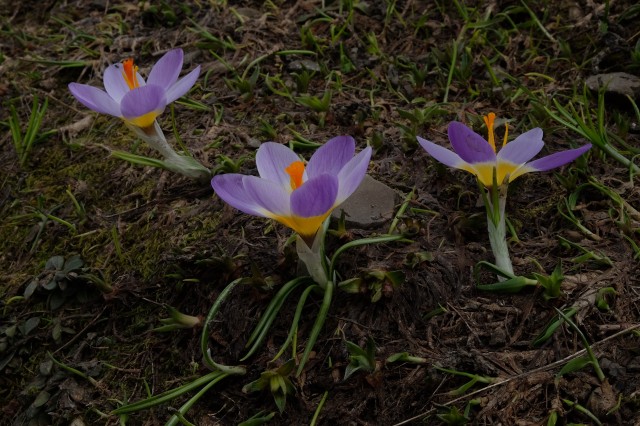 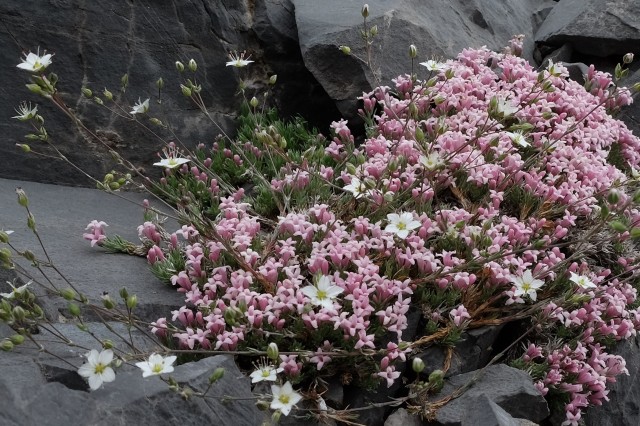 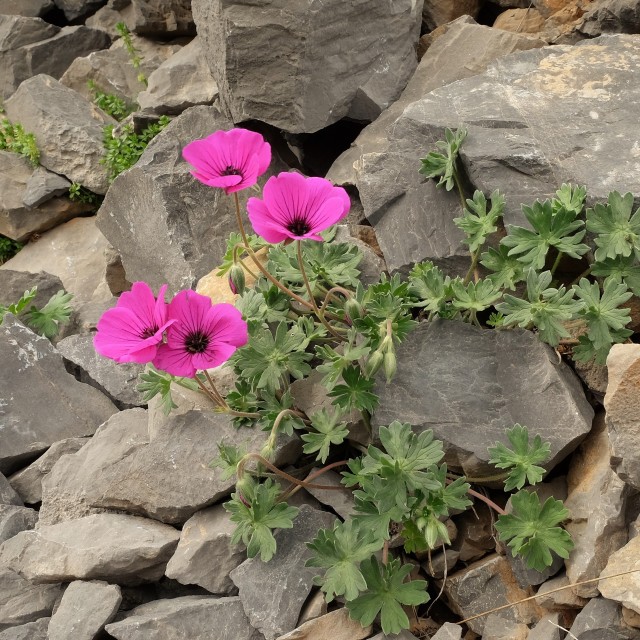 Minuartia juniperina, achillea in the foreground 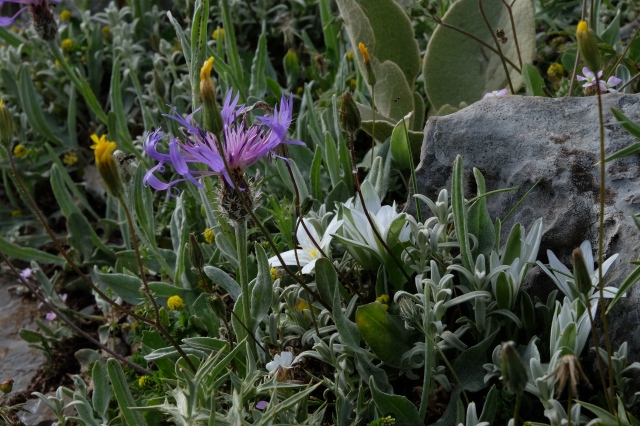 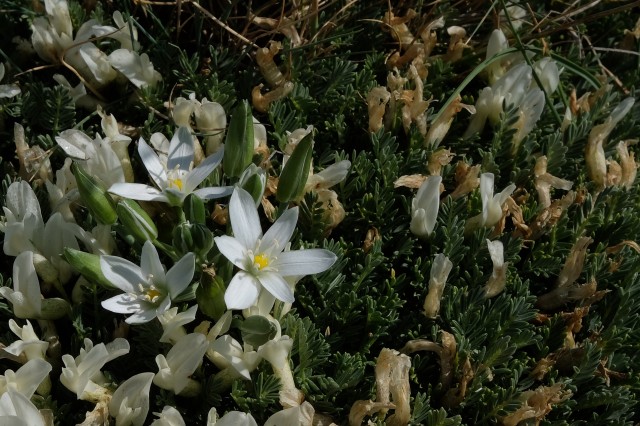 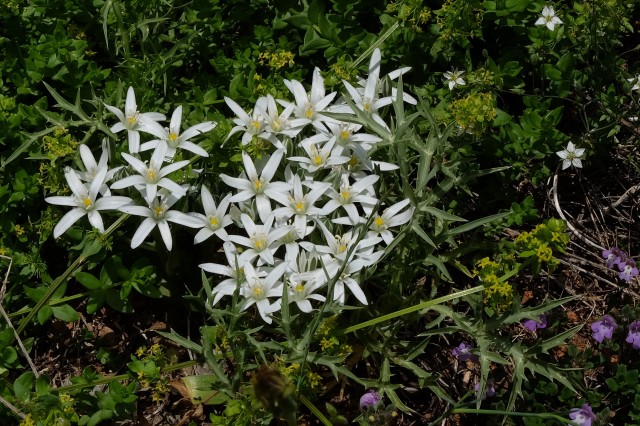 A different species of ornithogalum (my book says: ‘about 26 often similar-looking species in our area (Greece and the Balkans), six of which are endemic. A difficult genus.’) 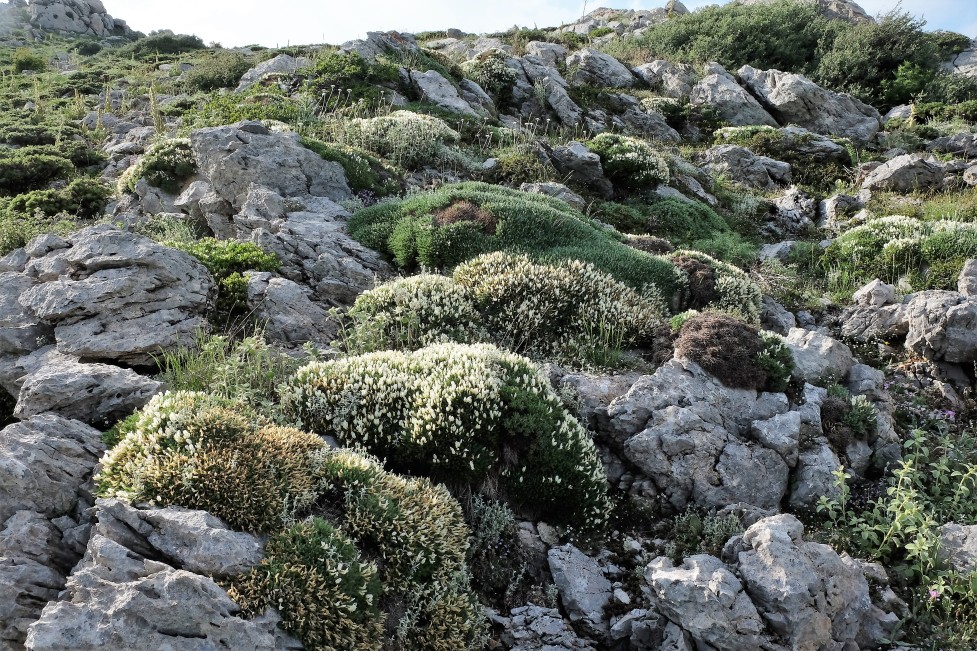 You can stay in Ano Trikala at about 900 metres. From there a road goes up to the small ski resort. Well, it’s not really a resort. Nowhere to stay. A place to ski.  But the road gives access to the mountain, and it’s paved. There are lots of dirt roads on the mountains in Greece, but you wouldn’t want to try a hired car on them. What happened to nice old cheap Pandas, with plenty of clearance. Now cars are so low on the ground, the rough tracks would rip the bottom off them. And 4 by 4’s cost a fortune to hire. So this road, and a similar one on Chelmos, are useful when you’re getting old. I turned off to the right just before the ski place and then walked on up a rough track onto the mountain, which swings to the left of the main peak and becomes a narrow path into the increasingly narrow and rocky gully which leads to the place I’ve been writing about….. The drive up from Ano Lousi takes you first through a forested valley, where there are lots of flowers, especially the bold but delicate thistle, Morina persica,  to see in open places by the roadside, then onto a broad plain  above the tree line at about 1400 metres, where sheep and goats graze in summer. Here you see the first big carpets and canopies of prickly Astragalus angustifolius which are just coming into flower in early June.