2 days in Dresden, some photos

Posted on October 30, 2016 by jonathan trustram

I took the train from Berlin to Dresden.

Hamburg to Budapest, Hungarian carriages, an important strategic route. At Dresden Hauptbahnhof there is a model railway. If you put a coin in each of the four slots you can have four trains whizzing round the track at the same time.

Distracted by the model railway I scarcely noticed Foster and partners superb reconstruction of the station.   Sir Foster as the Sachsische Zeitung referred to him, I later saw. This next picture is taken from the Guardian website. 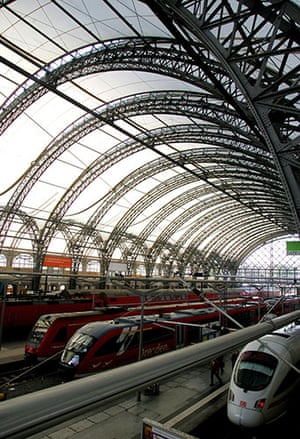 Broad meadows, a flood plain, run all along the right bank of the river Elbe  opposite the Altstadt.

“I only saw what they let me see” – Bob Dylan

In the heart, quite a small heart now, of the old city was an exhibition – just in the open – of photos of refugee children from the middle east, some sleeping in woods, stuck at a border in the Balkans, some in hospital – it said of one child  that she wouldn’t rest her head on a pillow at night because she associated pillows with the bombing that always happened at night in Syria.

I didn’t see any nazis, although Dresden is the heart land of Pegida.

Arthur Harris famously said after the raid, when there were already questions being asked in Britain,  in a letter to the Air Ministry:

“The feeling, such as there is, over Dresden, could be easily explained by any psychiatrist. It is connected with German bands and Dresden shepherdesses.

The art of Dresden, even if you don’t visit the porcelain gallery, is frivolous, light hearted, sexy; you can see why Arthur was pissed off.

(here’s more, a later insert, from  Slaughterhouse 5. When the naked Montana Wildhack, a motion picture star, is brought to Billy on the planet Trafalmadore we read that the light from a lamp ‘threw a baroque detailing of Montana’s body into sharp relief. Billy was reminded of fantastic architecture in Dresden, before it was bombed’. The next time I visit the Zwinger I will be reminded of Montana Wildhack. Could it be her above?

Augustus the Strong, who had most of it built, was, according to Pevsner, ‘an athlete, glutton and lecher.’  Up the river is the country palace of Pillnitz with all sorts of gardens and pavilions; paddleboats connect it with the city.

In ‘An Outline of European Architecture’ Pevsner says of the Zwinger: ‘If those who can admire a gothic Devon screen feel repelled by the Zwinger, they either do not really look at the object before them, or they look at it with the blinkers of puritanism. What exultation in those rocking curves, and yet what grace! It is joyful, but never vulgar; vigorous, boisterous perhaps, but never crude.’

Of the Frauenkirche Pevsner simply says: ‘another of the worst architectural losses of the Second World War.’ It was left in ruins until after re-unification and then rebuilt. In the museum in the crypt are bundles of numbered tags; each dug-out stone was given an identity, a place. Recycled blocks were left soot-blackened, and form a mosaic with the new stone, so the effect is different from St Paul’s, its clean and shining contemporary in London.

It has affinities with St Paul’s in London. Architectural and temporal as well as to do with each building’s war-icon status

Inside a sign says, respect this place, it’s Gotteshaus. But it’s not! It’s a theatre:

And the seats go up into the gods.

The climb up to the top of the dome and a fabulous view over the replica Altstadt is amazing. You go up the first bit in a lift, which seems like cheating, but then you follow a ramp, not stairs, which rises up between the inner and outer domes, partly in a vaulted tunnel,  but with openings across the space of the dome which frame constantly changing geometrical patterns and reflections. Describing the staircase at Bruchsal – he doesn’t describe the dome of the Frauenkirche because it didn’t exist when he was writing in the 50’s – Pevsner describes how you experience this  baroque exuberance by moving through it: ‘Words can hardly re-evoke the enchanting sensation experienced by anybody who has had the good fortune to walk…… the staircase itself then unfolded between two curved walls, the outside wall solid, that on the inside opened in arcades, through which one looked down into the semi-darkness of the oval grotto … and while you walked up it grew lighter and lighter around you…’

from the top is a fine view of Augustus’ fairy palace, although I enjoyed  inside more than outside:

Om the way back from Pillnitz in the bus you pass miles of detached houses set in generous leafy gardens by the river. The bourgeois suburbs largely escaped the bombing. Then as it grew dark I walked over a bridge and along the meadows towards the city centre

The art gallery is brilliant. A picture by Cranach (elder or younger, I can’t remember) has the finest pair of trousers, tights rather,  in European art:

This entry was posted in history, politics and tagged Germany. Bookmark the permalink.