back on familiar ground

Posted on November 9, 2016 by jonathan trustram

see also remembering and forgetting, the bombing of Dresden

I was soon back home on familiar ground, where the obligation to remember certain things in certain ways grows ever stronger. Mrs May is outraged that the England football team is not allowed to wear poppies for an international scheduled for November 11. Just as the wearing of uniforms becomes increasingly compulsory for school children, so a red poppy is essential for everybody in a suit, for everybody in public life, including weather forecasters and footballers and football pundits, though I think I see fewer than ever worn by ‘ordinary people,’ but that might be because I live in one of Britain’s least nationalistic corners.

I’m planning to write more about Germany, and how official German remembering is very different from official British remembering. And I wonder whether such a long period of amnesia, the silence of the defeated, had contributed to the long afterlife of Nazism. A few years ago I did a google search on the bombing of Dresden and quickly found myself among Nazis. You can see pictures of the asphyxiated sitting like perfect waxworks in cellars from which the firestorm sucked out all the oxygen.  They call it the real holocaust.

But back home I revisited the Hyde Park Corner Military Memorial Theme Park, and I’m surprised that no other Londoners that I know have been there. As well as the Waterloo or Wellington arch, where you can pay your money to English Heritage and climb the stairs to see an exhibition about the battle of Waterloo, there are now, scattered about the scabby grass and fenced in by roaring traffic, memorials to the Machine Gun Corps, the Royal Artillery, the Australians, the Indians, the New Zealanders, and most recently, thanks to the gratitude in particular of Richard Desmond and Lord Ashcroft, to Bomber Command. The only truly outrageous memorial is the Machine Gunners’, with its inscription: ‘Saul hath slain his thousands, but David hath slain his tens of thousands.’ The word outrageous brings us back to Theresa May.
I went to see St Clement Danes in the Strand, also on a traffic island, where a plaque tells us that the church, most famous for oranges and lemons, owes its name to the fact that the original building was put up in the 9th century by ‘the Danish community’, though you might know them better as the Vikings. Maybe they became a community after they converted to Christianity.  Outside the church is a statue of Bomber Harris and one with a much more fulsome inscription of Air Chief Marshal Lord Dowding, who was in charge of Fighter Command with their Spitfires and Hurricanes which defended us in the morally pure Battle of Britain.   St Clement Danes is the RAF church and I find its status hard to understand. Is there an Army church? Is there an Inland Revenue church or a Royal Opera House church? I know I’m being silly, but I thought that all churches were Church of England churches or Methodist churches or Roman Catholic churches etc, you know, church churches. But here in the Strand we have an expression of devotion to that powerful nexus between God, War, Great Britain, the Royal Family, everybody else’s families (especially the hard working ones) and History. It’s laid out clearly inside the church in cabinets of treasures, curiosities and memories. The courteous, helpful attendants, who reminded me of my C of E provincial youth, did not know that I was photographing these objects for purposes of crude satire, and I felt slightly guilty about that.    Outside the church was parked a pure white Range Rover, and one of the attendants asked me to come back after 3 30 because a christening was taking place. Those big white range rovers – like armoured cars which have gone to heaven. The church militant.
And I went to the Imperial War Museum, where I was surprised to find, on the top floor, the Lord Ashcroft Gallery, which is dedicated to bravery, but not to any old kind of bravery. (For other kinds of bravery visit the wonderful Postman’s Park, near St Paul’s.) A plaque on the wall with his abbreviated CV tells us that Lord Ashcroft has written five books on the subject, and that he has the world’s biggest collection of Victoria Crosses. The list of publications doesn’t mention the book about David Cameron, the one with the pig porno libel.

The first time I went to the memorial site I was lucky enough to get the full military heritage experience, guns, horses, fancy uniforms: 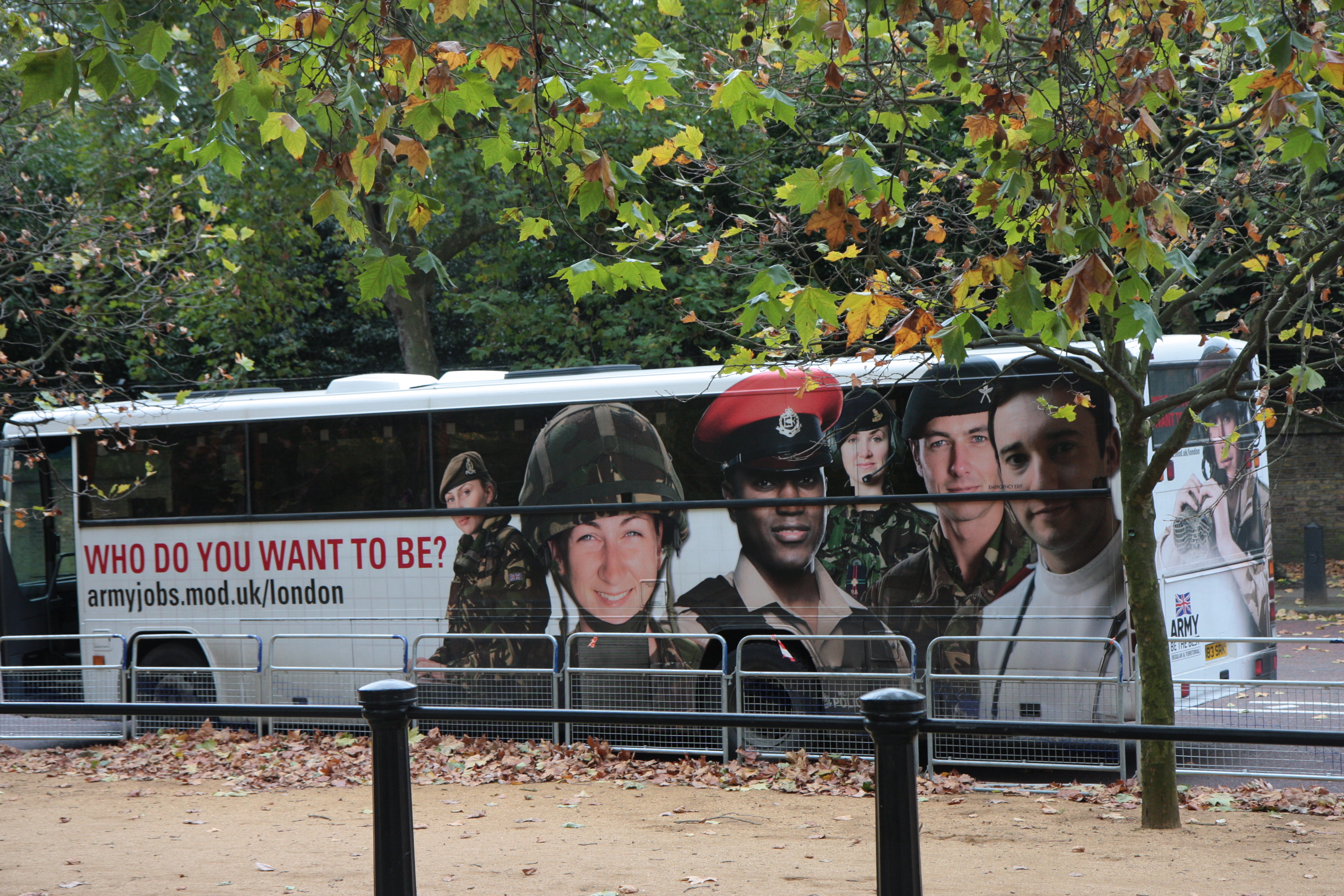 What a good question. 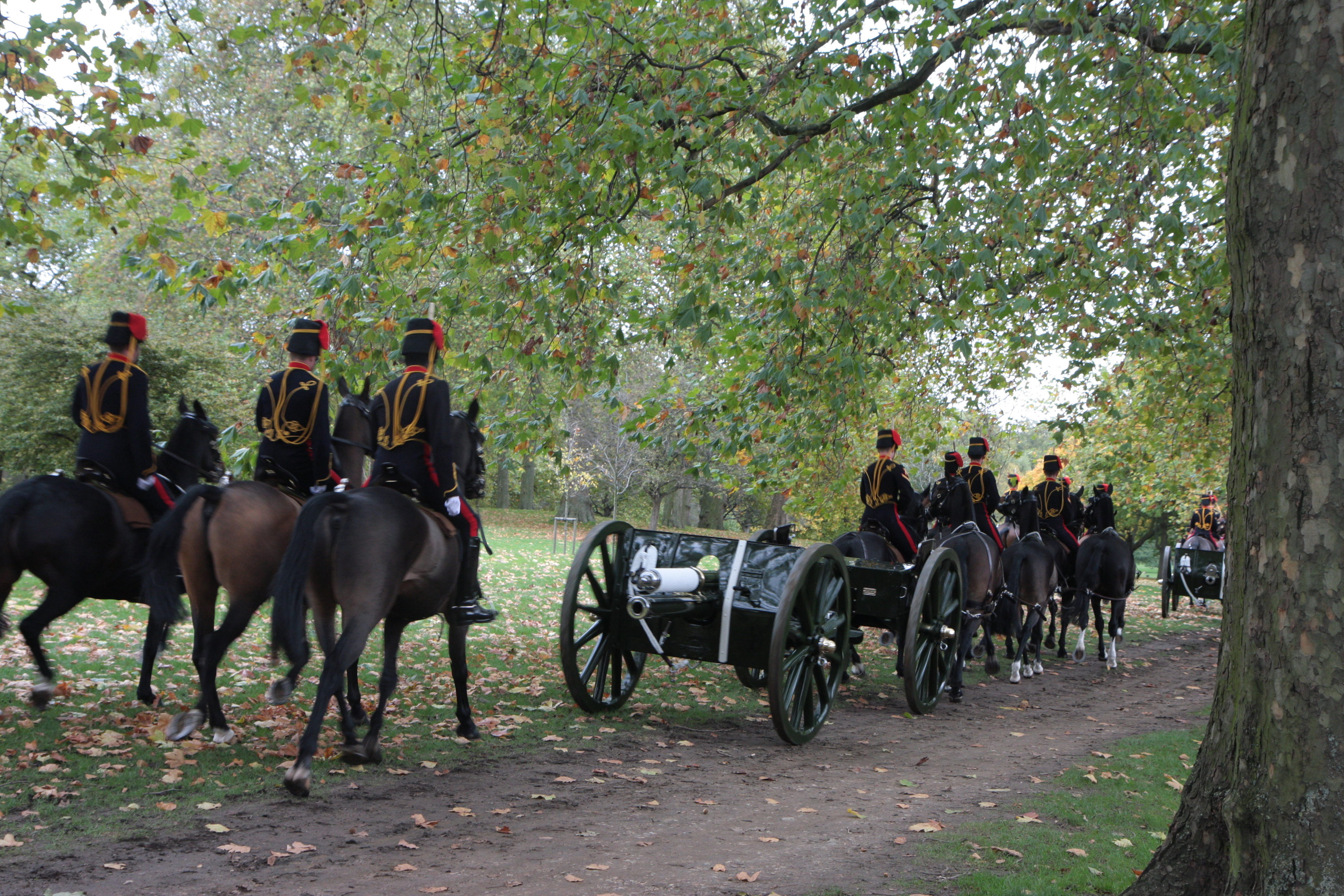 This is the inscription on the side of the Bomber Command memorial pavilion. Incidentally John Caudwell made part of his fortune in opinion polls. (Is he going to fall on his sword?) He’s also, we learn on his website,  Britain’s biggest individual tax payer. Reason there to fall out with Ashcroft? 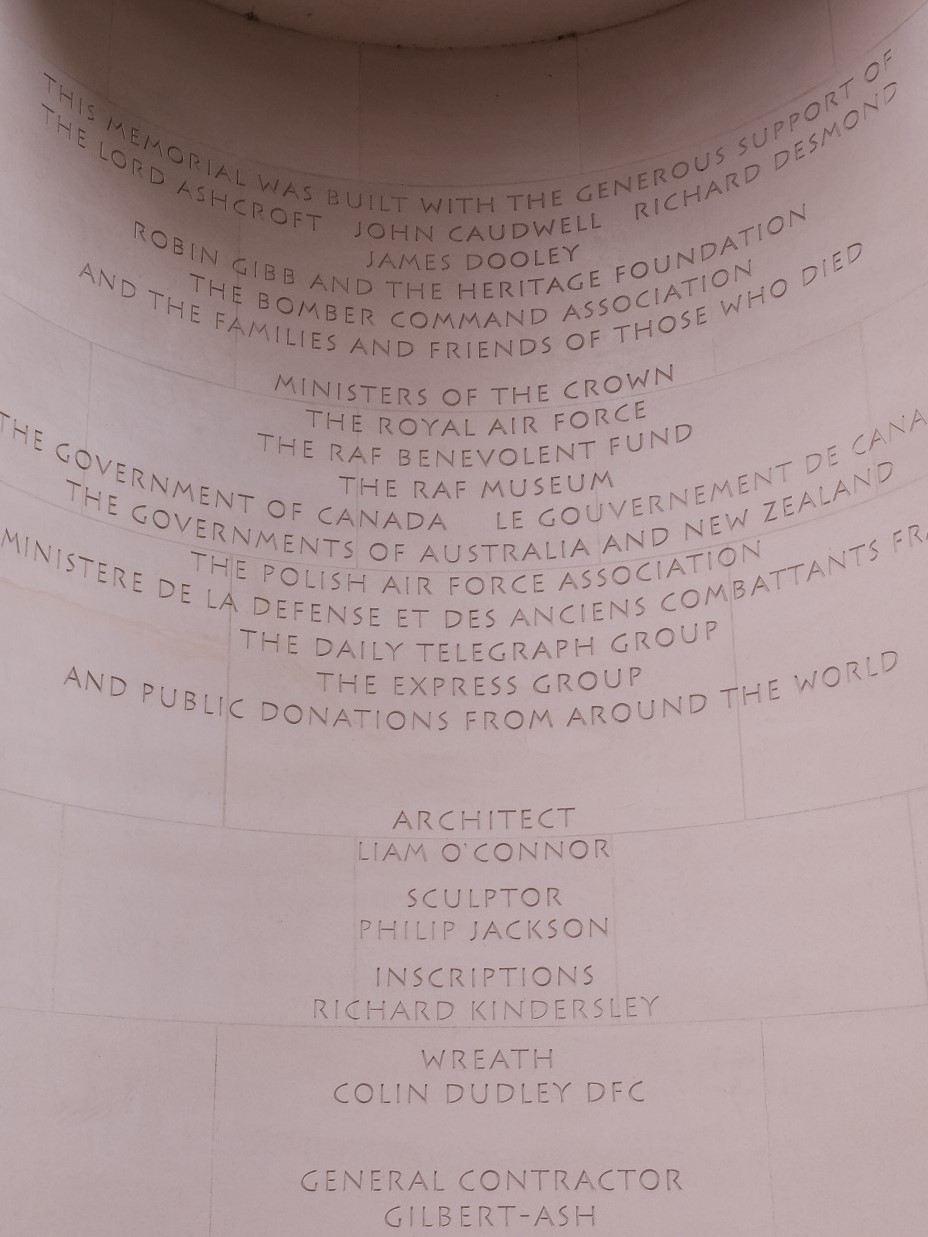 And this is the other side:

This is the arcade which extends on either side of the pavilion. The architectural style is some sort of reflection of Mayfair and of Apsley House, the Duke of Wellington’s place on the other side of the road. I tapped a pillar, because they remind me of the hollow ones which surround our local Morrison’s, but they are solid. Note the topiary beyond. Topiary always adds a touch of class:

I’m reminded how few memorials there are to working class heroes in this country. The men’s industrial style uniforms connect them with ordinary workers.  The presence of the humble seeming man in the foreground and the hand-written messages to which he might be adding stopped the mockery which the naff neo-classical pavilion and the names in particular of Richard Desmond and the Lord Ashcroft had roused in me.

There are two dedications. The second seems to be an afterthought: ‘also commemorates those of all nations’ etc:

A similar industrial style on the Royal Artillery memorial:

And in the subway of Hyde Park underground station mosaics of Waterloo. Here we are, best mates with the Prussians:

Just one more – if David hath slain his tens of thousands, is this he?  It’s the young man with the fig leaf and huge sword on the memorial to the machine gunners: 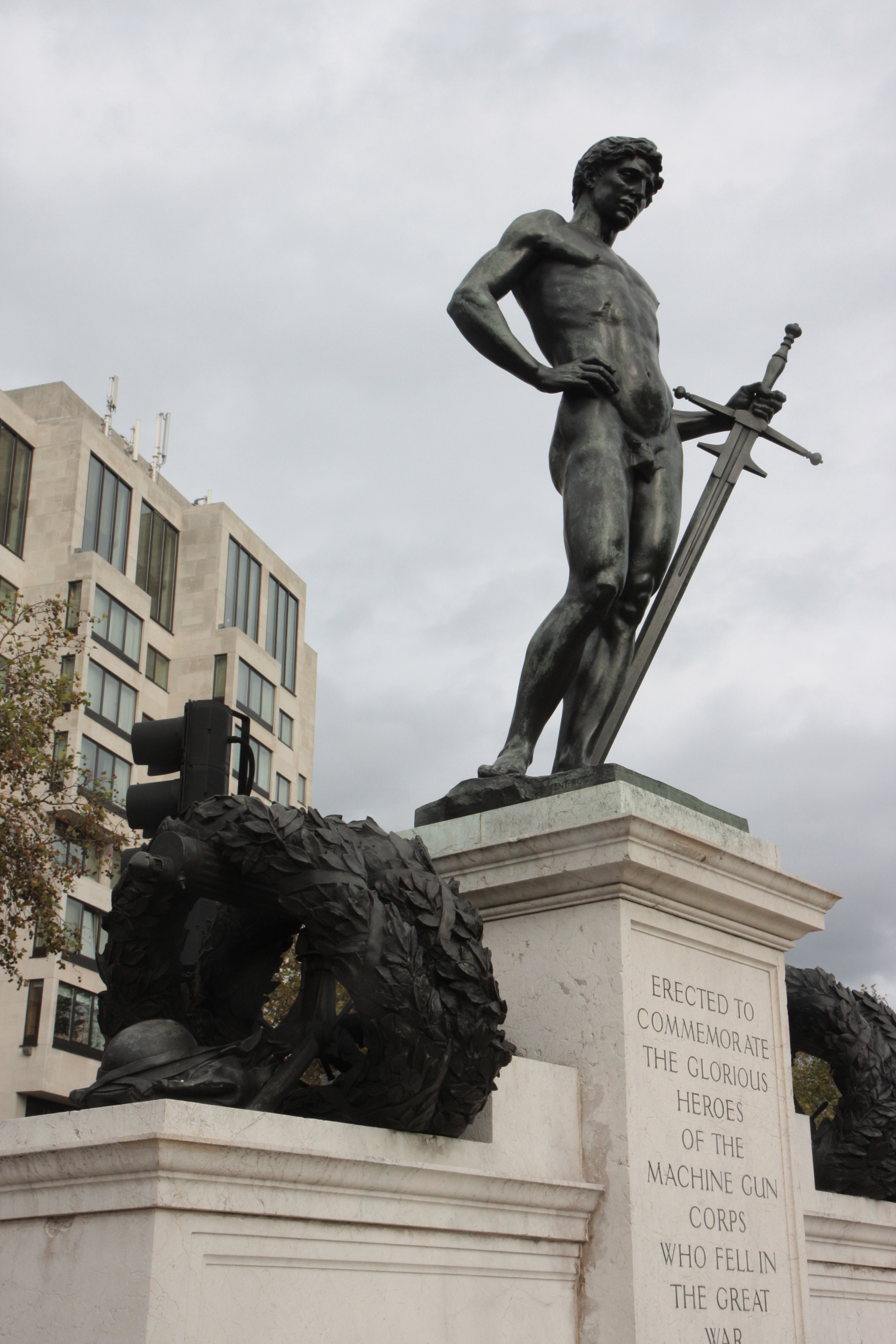 To the RAF church. First, just a few words for Arthur, and then a whole eulogy for Dowding whose chief campaign medal is of course inscribed ‘Spitfire and Hurricane’. You can see why Harris felt unappreciated and rejected, and returned to South Africa after the war. 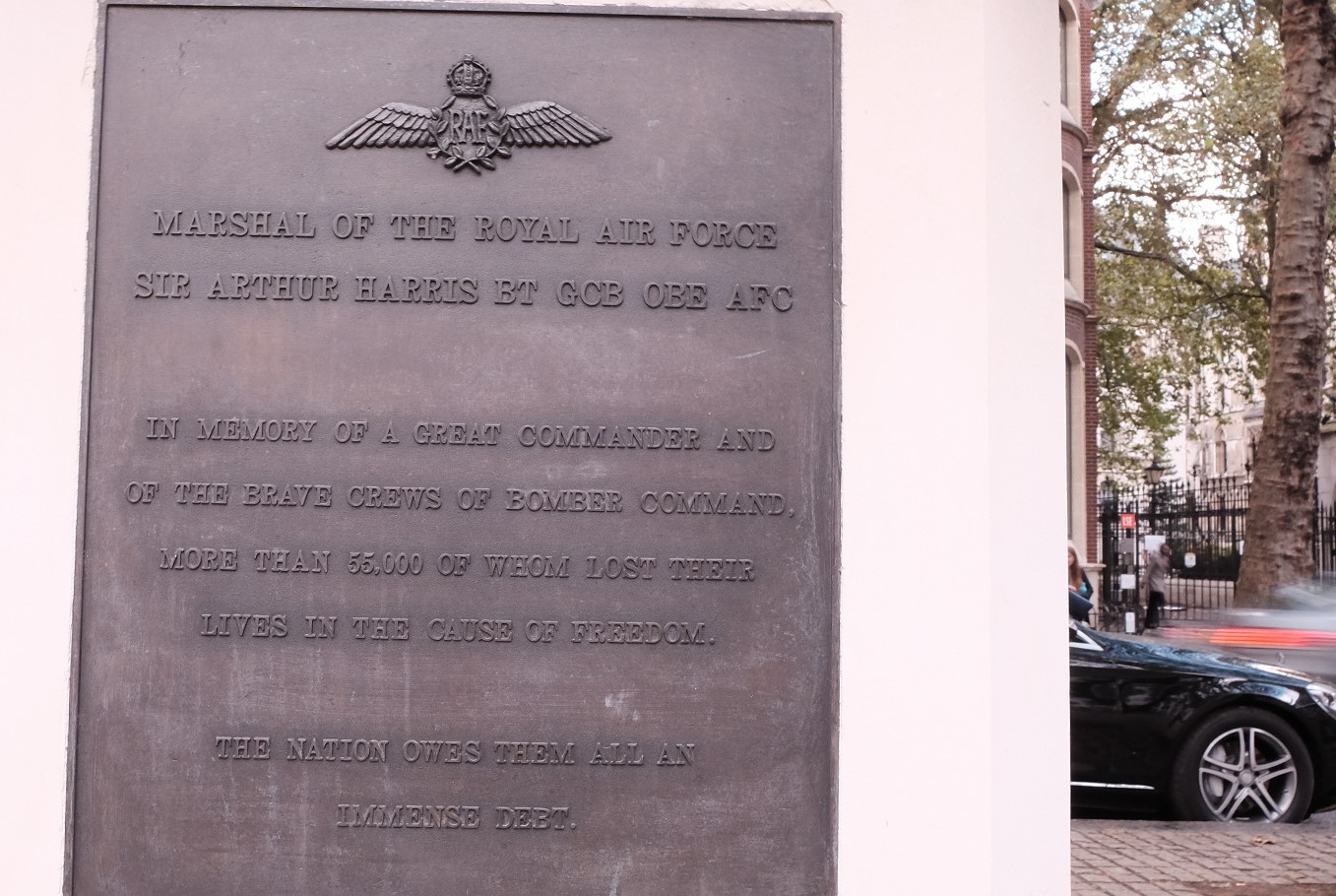 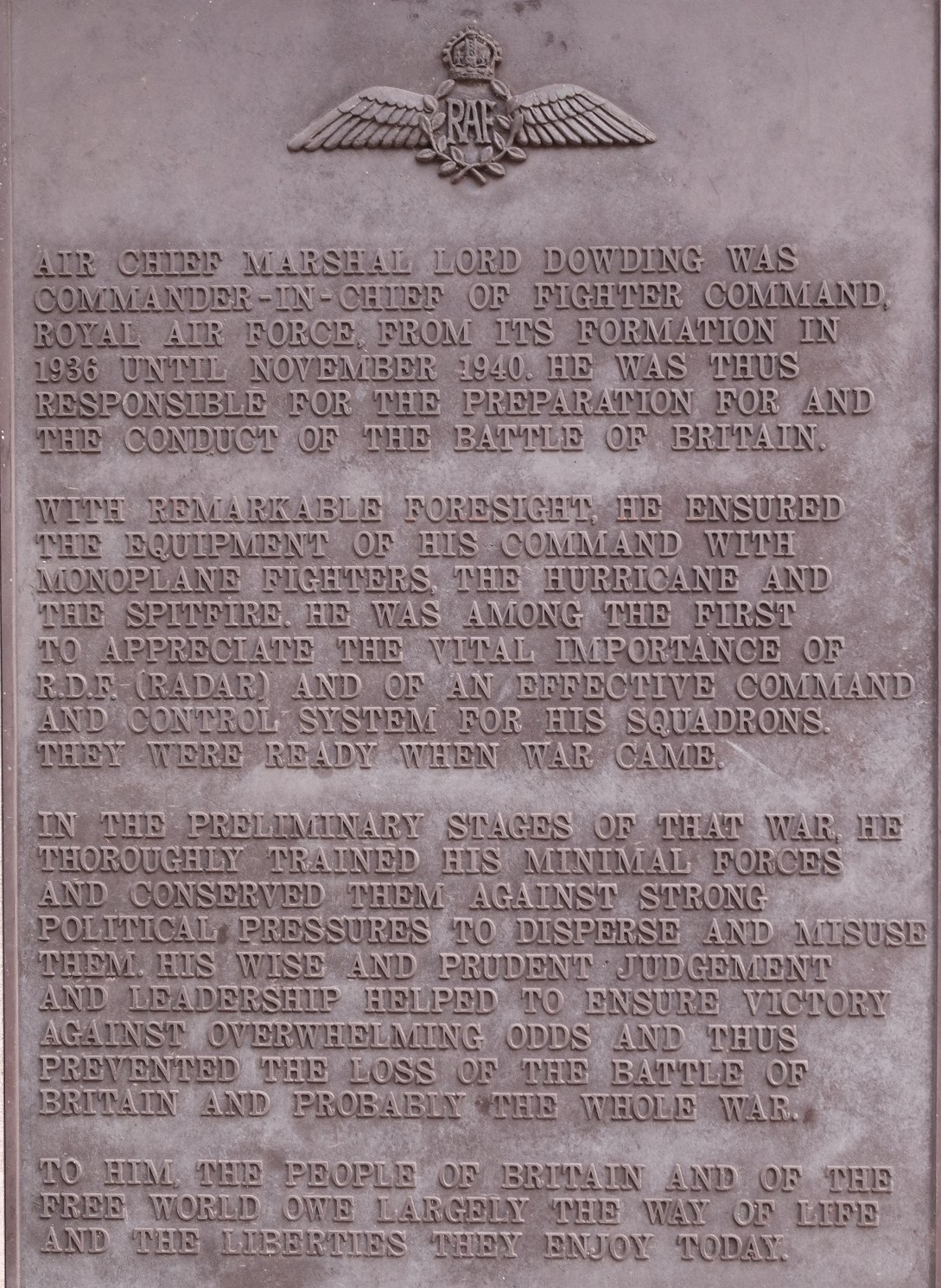 Inside the church. The lists of places that we see on so many memorials come to remind me of all those On Tour T shirts.

‘The rapid progress of an art’? Why does everything have to be ‘art’, football, gardening, war? 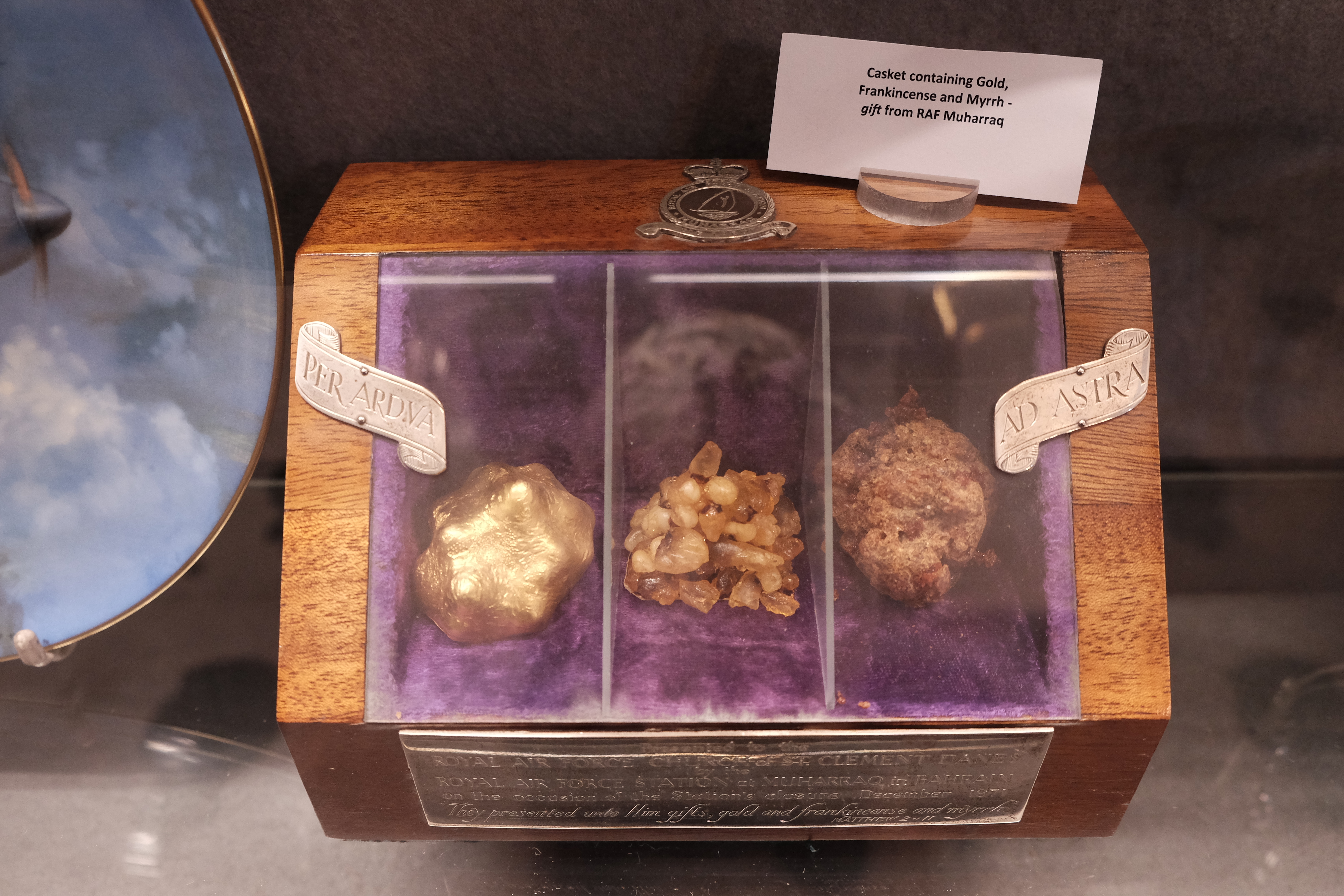 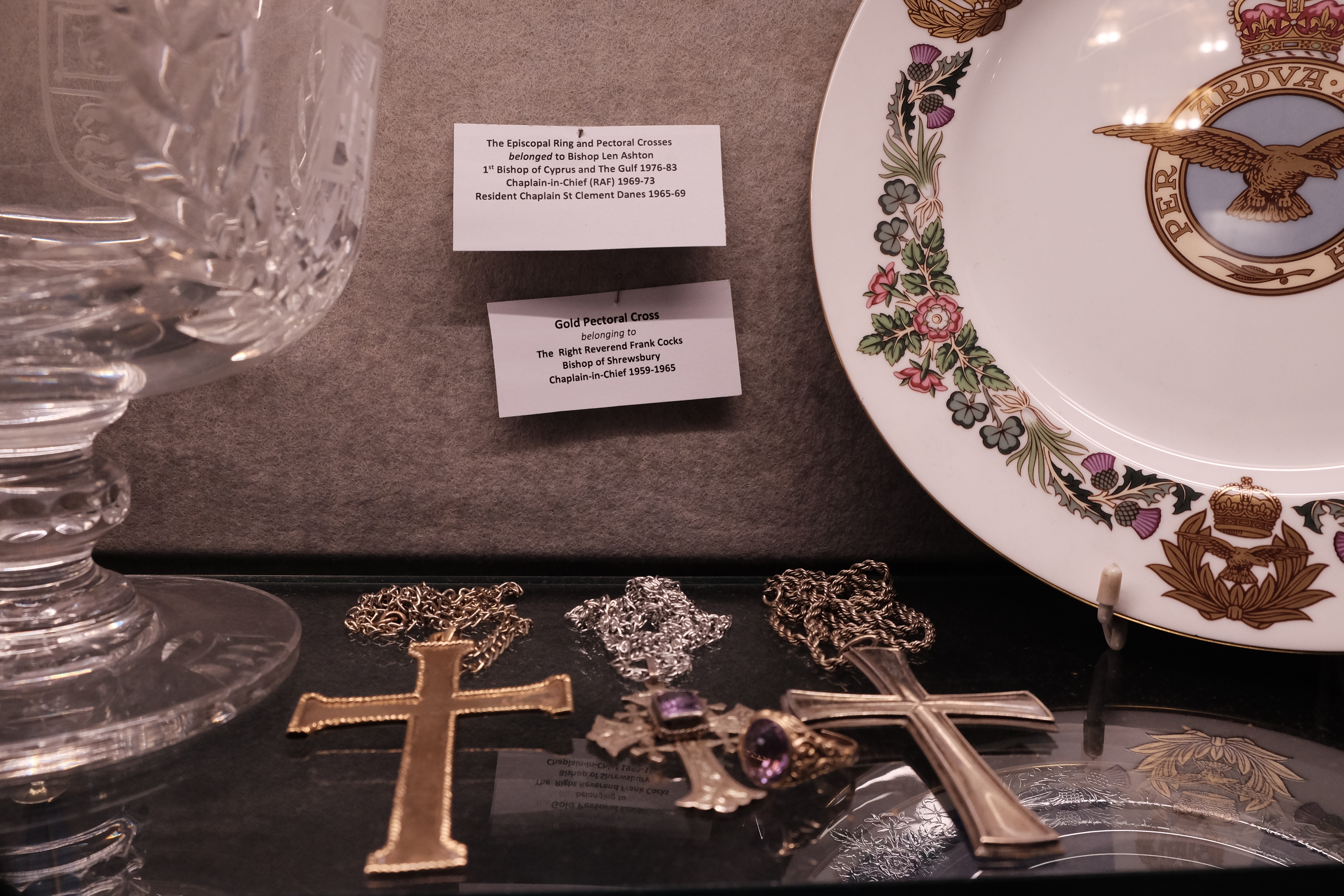 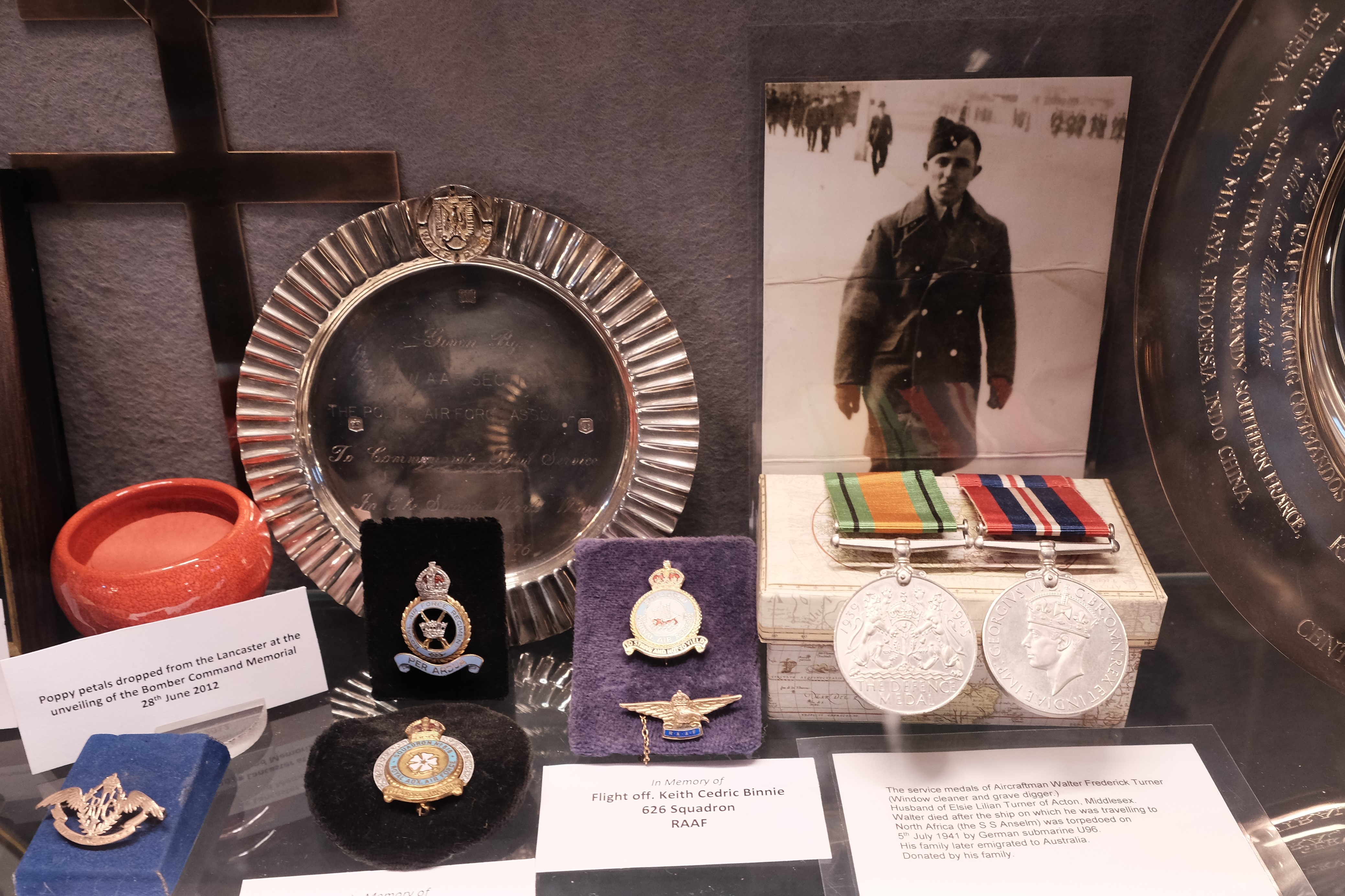 A page from the visitors’ book. It looks as if someone has written a mildly dissenting note in German. It says roughly ‘from Spain via London to Berlin.’  Note the Dam Busters again: ‘GOD BLESS THEM ALL’. Let’s hope that includes the 1,293 people who drowned when the dam burst….

Finally to the Lord Ashcroft Gallery: 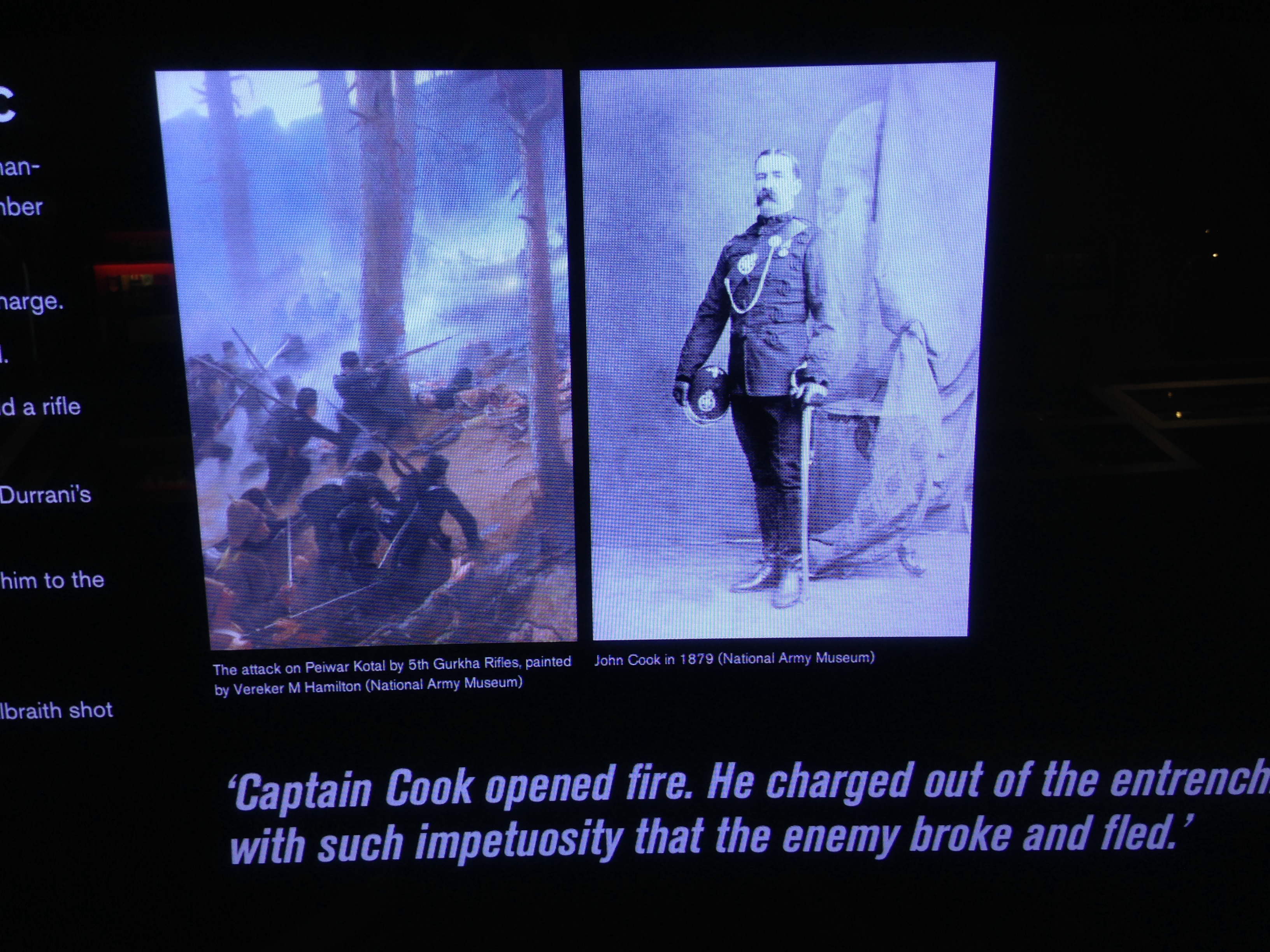 so he led a cavalry charge against a double line of machine guns! Was that not extremely stupid? Didn’t he know about David killing tens of thousands?

1 Response to back on familiar ground