Posted on December 6, 2020 by jonathan trustram

the cover of the Kew magazine shouts out:

the new way to

What was wrong with the old way, I wonder. And what is the new way? Well, you have to slow down, and

And you will find that ‘fully experiencing this most underrated of seasons can invigorate and clear the mind’.

And did you know that ‘One of the most striking signs of winter is that of the deciduous tress shedding their leaves to reveal their great natural architecture.’

And this they’re telling to people who’ve already forked out about £75 to be Kew members. Out here there are still people who experience trees primarily as things which distort and deform the pavements, or cast unwelcome shade and shed their leaves to stick to the car and block the drains, but they won’t hear the exhortation to love. Their experience of winter is full of cold, damp and darkness, if it were otherwise the experience of spring would be less intense.

I’ve been fully experiencing this advert for vaping:

I’ve experienced it on and on for the whole of this year, and last year too: I didn’t notice it at first, as if it were like the blue tits, so I don’t know when it was stuck up, but I’ve seen it all through the first lockdown, glowing in the sun, all through the summer break, into the wind and rain and the second lockdown, smiling and smiling, on and on, so pleased with themselves, but trapped to grin forever like in the Red Shoes, until the moment for me to act finally arrived.

I enjoyed that. The poster was made of some kind of strong plastic, well glued, if you pull hard it comes off evenly without disintegrating into shreds. I left ‘go on and on’ as a comment on the times, but I should go back and get rid of ‘govype.com’ which confuses the message.

but I do regret destroying this rich interior still-life:

I thought they weren’t allowed to put up adverts in residential streets, but this is different I suppose, because it’s on a phone box. Well, it’s not a phone box any more, it’s junk, derelict, no longer anybody’s responsibility.  This one is archaeologically important though, because many of the artefacts buried inside have survived in fairly good condition. How strange are the texts!  – “Please be prepared to use no more than four coins to pay the initial minimum fee of 6op.”

On january 5 2019 I took this photo of an advert at the end of the road, my road, interestingly on the same site as Led By Donkeys’ first heroic performance. http://www.ledbydonkeys.org

It shows also the architecture of the sycamore trees.   (“London’s own tree is the sycamore. wherever the city rots, it roots.”)   And just to the right of the poster you can see one of the mighty blocks of concrete which were placed on the pavement in case in a car crash someone smashed through the flimsy fence and down onto the railway tracks as had recently happened in an incident somewhere in the midlands when a land rover flew down an embankment and was hit  by  a train.  You could sense a kind of instability on this railway bridge which is curious  in that the line cuts diagonally through the crossroads, as the gaps between the paving slabs on the pavement grew wider. The hoardings blew over entirely in a gale a few years ago after flapping about violently for a day or two, but they have been securely rebuilt. The railway embankment offers easy access for rubbish in several places and as a result is one of the most sordid in London, but the sycamores don’t mind. (“London’s own tree is the sycamore, wherever the city rots, it roots.”)

‘Life is out there. Are you?’ So much more punchy and direct than Kew’s pedantic self-help marketing style. 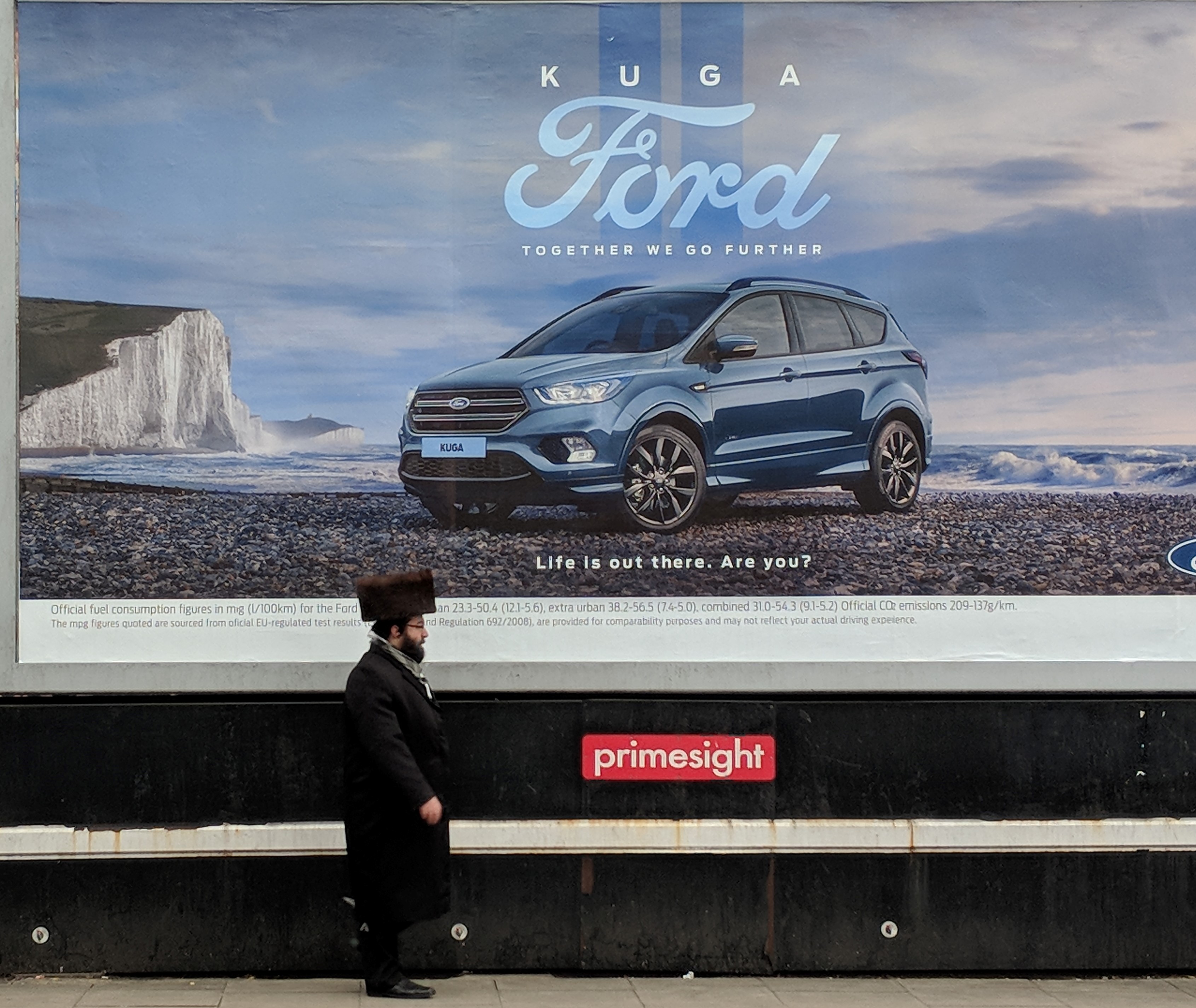 It’s called a Kuga. I don’t think I’ve ever seen one, but I’ve probably not been paying attention. It should be pointed out that not looking, not paying attention might also be important for our mental well- being. The man in the picture knows that.

Just as I like the quiet shores of the Thames, advertisers love locations without the clutter of other words and other images, so that they can impose their own. They love to show cars without roads. They don’t need to be off-road vehicles. The motoring fantasy seems to be that they’re all off-road, they’ve flown away to freedom. Mountains are the favourite setting, they lend majesty to a car.

This is the cable car station 3000 metres high at the top of Piz Nair, in the Engadine, in Switzerland. Switzerland has four official languages and naturally none of them are English, but it seems that when it comes to utter bollocks, only English will do. Can you read what it says below Excitement? ‘Welcome to the home of quattro’. It’s a flying car, which of course is what cars do in action movies.

But see also garden notes no 29, dahlias, bees, Keats again, a little rant, a mountain memory for a glimpse into the wonders of this mountain when you leave the cable car station.

Back to the  Kuga: the cliffs, the beach, the sea, they’re not only natural and free from commercial competition (imagine if you got your Ford down onto the beach and found that VW had got there first,) but in this case they are intensely British. Just the job for an advertising campaign in the year after the referendum, and the year in which Vera Lynn was ninety something.