Posted on April 5, 2020 by jonathan trustram

Previously on Gardening Notes –
the intricacies of intimate weeding, the scorn of the radical ecologist, the disappointment of bare earth in Wiltshire, the possibilities for a garden for old age, the harmless vandalism of the Swiss cow, the wonders of the hellebore, the promises of spring, sacred and demonic plants….

This is Iris ‘Harmony’, one of many dwarf (can we still use that word?) irises for stony soil. It’s long gone, at least it feels like a long time since it was in flower. In a mild winter it will flower at the end of January. It’s easy to grow as long as you don’t allow big plants to move in and take over its space in the summer, which can happen easily because it disappears very early in the season, and even though it was lovely and important in the winter, you soon forget all about it, and you come back from the garden centre and think, there’s a good space there! and you stick a fork in  and mash up the little dormant bulbs. (Gardening is often a comical, ludicrous business. How they laugh on Gardeners’ Question Time. The slugs ate all the lettuces! He sprayed her dahlias with weedkiller! HaHa!) But you can almost treat them like bedding. If they disappear, just buy some more. Wholesale, they cost about 6 pence each. This patch, first planted about four years ago,  is gradually spreading.

I don’t know much about fungi. This was growing on an old stump in Clissold Park.  Who needs flowers? The photo was taken in January.

Cyclamen coum.  The iris is evanescent but this flowers for weeks. Much less known than Cyclamen hederifolium, which comes out in the autumn, C. coum flowers in the winter, and is just as easy to grow. Now in April they are just coming to an end. With the two species you can have cyclamen in bloom from September until the end of March, with a brief intermission. They seed themselves, they both like shade and a leafy soil, but as with the iris  you need to honour their space in the summer, when they disappear. We tend to think of hibernation – the name comes from the latin for winter – as only happening in winter, but many plants go through summer dormancy, dying back when it’s hot and dry,  bluebells being the most famous. Unlike most bulbs cyclamen need to be planted very close to the surface. Their warty, hairy little corms (not bulbs) can grow as big as saucers. 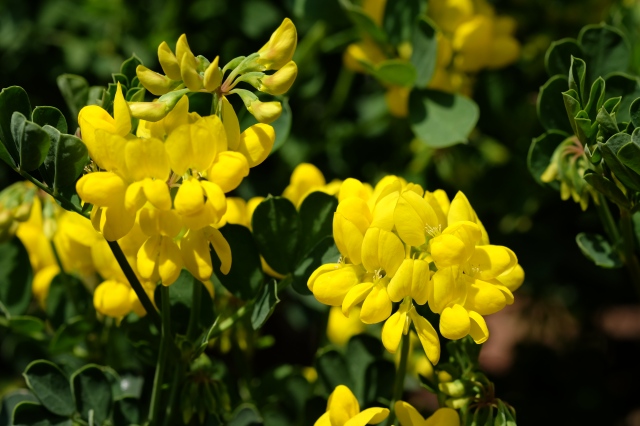 Call it coronilla. Each head of flowers looks like a little crown.  It’s actually Coronilla valentina sub-species glauca. There’s also a paler one called C. valentina ssp. glauca ‘Citrina’. (I had to look that up, I get very confused.) It doesn’t like a cold winter,  so it’s another way to enjoy climate change. It’s in full flower now, in early April,  it has been for some weeks, and will be for some more weeks. It will grow six or seven feet high but is easily controlled by pruning, after it’s flowered. (That’s the golden rule of pruning. More of that later. ) At first it grows in a lax, floppy kind of way which can be a bit annoying, but it’s best to allow it to develop in its own way, not to truss and control it too much. In time it will develop into a dense, twiggy bush. Good against a sunny wall. 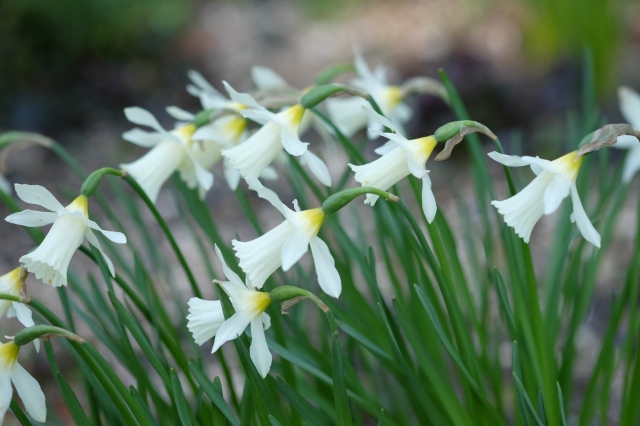 I like those narcissi – they seem more like narcissi than daffodils – which are closer to the wild species than the big, clumsy, vigorous, common ones; the common or garden ones. I’ve been called a snob. I don’t think I am but it’s hard to find words to describe the daffodils I don’t like which don’t suggest that I am.   Jenny, pictured in the previous Garden Notes, and Elke like open conditions, W.P. seems happy in woodland.

Here’s another picture of Jenny. It – she – has a much more yellow trumpet when it first opens, which gradually fades to white.

And here is Fritillaria meleagris. It’s a Brtish native! The first native in these notes. Once common in damp meadows, there’s still a nature reserve near the Thames in Oxfordshire where you can see thousands. All you need is patience and time, and it will spread. These are growing in  quite a dense mixture of other plants, euphorbias, geraniums; they’re happy with that.

Two common mistakes with spring bulbs are: not planting deep enough, and not planting in time. Small bulbs especially, like snowdrops, dwarf irises and crocuses, should be in before the end of September.  Otherwise the bulbs can shrivel, dry up or go mouldy. Remember that they start into root growth in autumn, before the cold weather comes. Depth of planting is important because they need to get down below the heavy competition from grasses and other plants.

One common mistake with planting a garden in spring is to put in too many seductive spring flowers.  Everything in these notes will be a distant memory by June, let alone August. Enjoy spring but don’t get besotted. Within ten minutes walk of my house there are abut five magnolias in front gardens, (all the same variety out of hundreds of possibilities, I blame the garden centres) which have been badly pruned, mutilated because they outgrew their lovely youthfulness. And apart from a couple of weeks in March they look quite dull, a dullness exaggerated by their poor shape. That’s another story.

I checked the name, its M. soulangeana, and blimey, you can get one on ebay that’s ‘used.’  What, not even pre-loved! It is a very beautiful tree, given its freedom, but when you can see half a dozen by walking down the street, well, you’d do better to try something different. But I’m not a snob.

Next on garden notes:  wonderful honesty and other biennials.