Is it a special year for Welsh poppies? Here they are at G., both colours, with honesty still flowering in the background. Pushed into the background.

By late afternoon the naked flowers have closed up:

The hellebores have also seemed to retreat, to become invisible with so much else going on. The old flowers and flower stalks on some of them do look quite tatty now, but some show the promise of ripe seeds and on their petals a stiffened, shadowy memory of February’s colour:

Actually they’re not petals, they’re sepals, which are normally green or greenish and serve to protect the flower bud. If they were petals they wouldn’t be so long lasting. Inside the flower you can see the nectaries which are are in fact modified petals. Can you see them, in this flashback to late January, in between the coloured sepals and the pollen bearing stalks (the anthers)?

I only learnt this myself today.

You might like to plant something for a person’s birthday, a plant which would flower in celebration, and could be counted on, unlike many of the trees which are unfortunately planted in someone’s memory.  If that birthday were now, May 9th, you could choose Geranium sylvaticum:

Happy Birthday to my sister Judy!

The flowers don’t last long, like birthday cakes. It’s found all over Europe, likes woodland and ‘middle mountain’, it’s usually more pink in the wild. Maybe these are a garden variety. There seems to be some sort of instability in the spectrum of pinks, blues and mauves, also they change according to the light and the camera. I’ve taken photos of forget me nots which turned out pink, and photos of I can’t remember what,  pinky-mauve things which turned out blue….  Something I should learn more about.

Now the story of a distressing day which led eventually to a happy outcome.  Last June we went to the Well Street Common festival, confident that my adorable, beautiful puppy would win prizes at the dog show. We entered her in three different categories, I don’t remember exactly what they were, all ways of measuring general cuteness, loveliness, cuddliness, friendliness, and maybe a little obedience too. They awarded the prizes in order, starting at the top, and she didn’t get first, or second, or third, or fourth – she got fifth. Out of about seven. And in the other categories she wasn’t even placed. One of the dogs that did better than her only had three legs. I thought that maybe down there in south Hackney they don’t like people and dogs coming from Stoke Newington to win prizes.

I took this picture months later, when I’d mostly recovered from the trauma. Can you see the way the red of the rosette is reflected in her nose? That shameful glow?

does this work? it has caused me at least half an hour of patient frustration. you’re supposed to be able to see a photo of a dog in a wheelbarrow. a dog worthy of prizes.  give it a click or two.

Anyway, sorry about the diversion. I meant to say that all was not lost on that day of humiliation. There was a plant stall at the Well Street Common affair with lots of interesting things,  and I bought a Saxifraga callosa, just a little rooted rosette. This kind of saxifrage roots easily. It appeared to do very little for a few months, but then it sent out a ring of new rosettes, and early this spring, a flower  bud, which grew and grew and has now opened. Here it is on March 19th:

…and here it is today:

When I can eventually open my garden again I hope to have some cuttings.

Here is a magnificent one in Switzerland:

Having seen it in the wild, on the rocks by a waterfall, I remember not to let it get too dry.

Lastly….   on the old question, what is a weed? I don’t suppose you clicked on the link to tulips-in-the-wild in number 15, did you? Or if you did you probably didn’t get as far as this one. It’s Tulipa clusiana, the forerunner of the absurdly named Honky Tonk. All the other photographs in the site are of treasured, perfect specimens, but clusiana is just a weed to be trodden on. 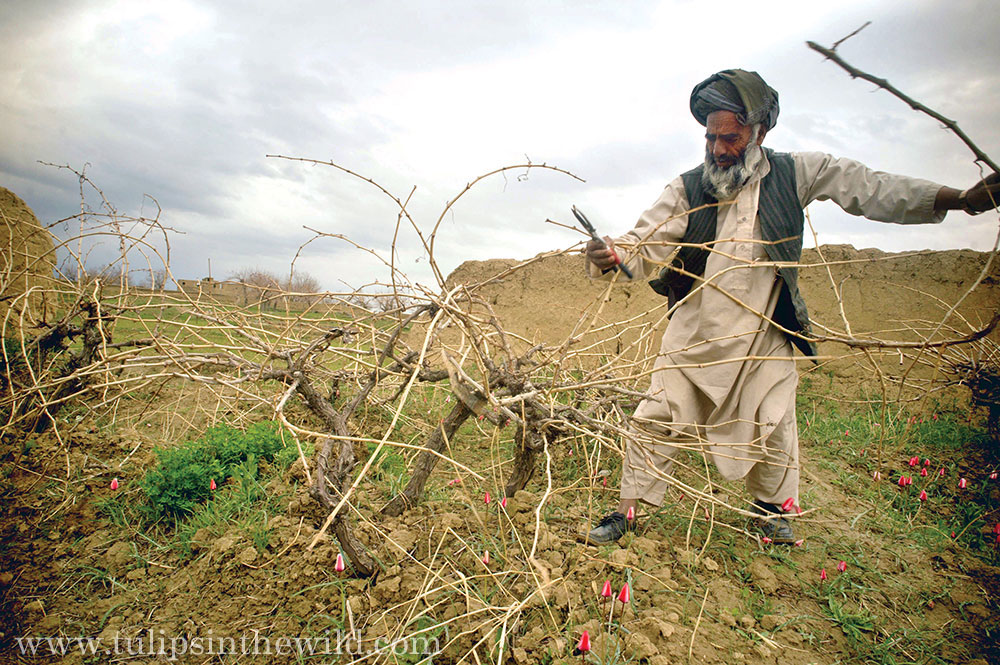 “The lady tulip, as it is sometimes called, is native to northeastern Afghanistan and Pakistan. It is a delicate and beautiful thing but apparently of no great significance in its native land: This grape farmer has stepped on a plant in bloom as though it were just another weed. T. clusiana is named for Carolus Clusius, the scientist who brought tulips to the University of Leiden botanical garden in the 16th century.”

This entry was posted in gardens, hilarious and tagged Switzerland, tulips. Bookmark the permalink.