Most of the honesty plants which will flower at this time next year have already appeared. I went looking for them in the garden so as to show them to you; there were more of them than I had realised, but it was hard to find any that were perfect, and if you can’t find perfection in spring, when can you? Slugs and snails had already got to them, in spite of the dry weather. Slugs can destroy tiny seedlings before you’ve even noticed they were there.  If you have enough seedlings some will survive, and half eaten ones will grow on.

I wanted to show you the seed leaves, but they’re gone, except for a fragment on the right. Seed leaves are different from ‘true’ leaves.  This plant has appeared in a little rock garden. Not the best place, but I might leave it because most of the dainty things I plant there die anyway.

While looking for honesty seedlings I was surprised by how much the eryngiums have grown in the last few days….

This is another brilliant biennial. These germinated last year and developed a deep, stout tap-root whilst still looking insignificant. They disappear altogether in winter. When I first grew them I thought they had died.  (Some plants leave the remains of withered shoots, or a few scrappy leaves, but this eryngium leaves no trace.) Reappearing modestly in spring, by July they look like this:

(Euphorbia  ceratocarpa in the back ground.)   As the flower head grows the whole plant becomes prickly, steely. Bees love it. The dead plant holds its seeds well into the winter. The thorny bracts (encircling the flower head) keep their shape. It’s a plant with a well-known story. Its nickname is Miss Willmott’s ghost; she was a friend of Gertrude Jekyll in the late 19th century and a big fan of this plant. When she visited other people’s gardens she took seeds of it in her pockets and scattered them unnoticed so that the next year  the flowers  appeared unannounced.  It’s called ‘giganteum’ not because it becomes huge, but for the actual flower heads.  Here it is with friends: 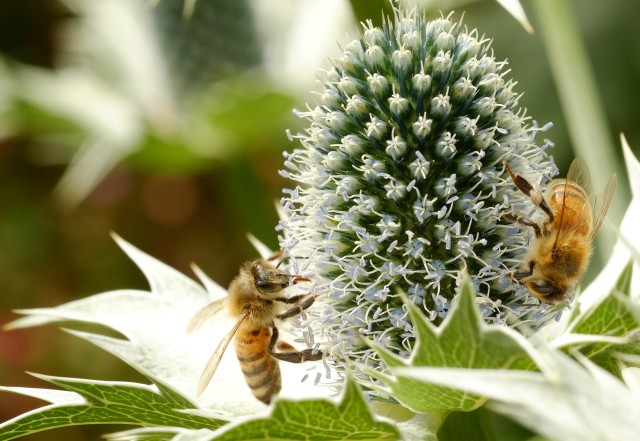 And this photo was taken in December, inside. The bracts are perfect while the flower head is shrunken: 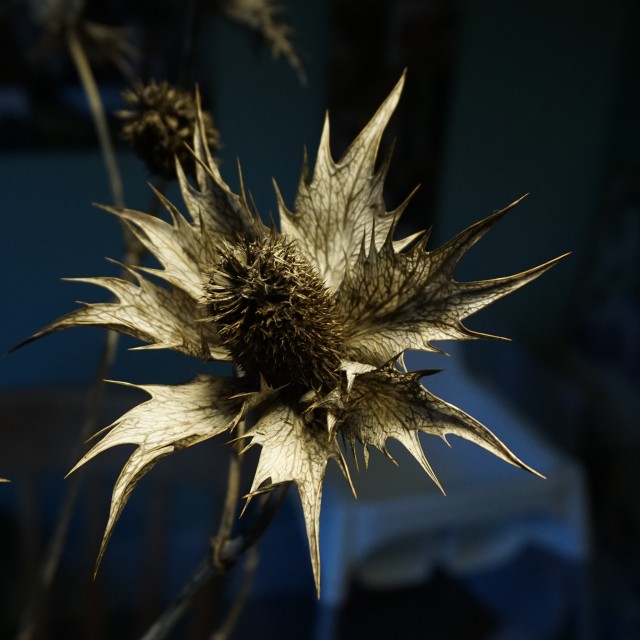 Being a biennial Eryngium giganteum is very hard to find in garden centres. And it doesn’t like to be in a pot for long; it needs to send its roots down deep. If you visit St John’s churchyard in Waterloo in late autumn or winter, you will find thousands and thousands of seeds. Maybe millions. We haven’t counted. Seeds germinate in May, as I remember.

A tip:  thinking again about the nibbled honesty…   after all this dry weather there are a lot of hungry slugs and snails out there. The first day it rains, go out with a torch in the evening and you will find loads of them. I generally tread on them. Don’t just throw them next door. It’s un-neighbourly and anyway, they’ll probably come back.  Beer traps work well, they like even the cheapest lager.