Posted on October 16, 2018 by jonathan trustram

News from the mainline, whilst waiting for the local train. A few weeks ago you saw trains which said LNER at the front and VIRGIN at the back. Now they’ve almost completed the paint job. But cleverly they’ve kept Beardie’s colours and left the coaches banded red and white. It’s that bold saucy vibrant lipstick red that Branson loves. But isn’t that his intellectual property? His sexual intellectual property. Could he sue?

A nice woman phoned in to 6 06 on Radio 5 the other day to say she thought Mourinho needed psychotherapy. Kirsty Gallacher was astonished. She didn’t know what to say, so she talked about the look on Robbie Savage’s face. ‘The look on your face!!’ Apparently Robbie was so gobsmacked he was speechless. So speechless that he couldn’t even say, “I’m speechless!” Kirsty had to say it for him. She found a platitude and then the woman was cut off. Normally Robbie Savage gets quite pugnacious when he thinks someone is talking nonsense, but this was just so outrageous. Crazy people have to be cut off, like the bloke earlier who said ‘fucking’.

Grayling the transport secretary said on R4 ‘most members of the Muslim community are decent hard-working people’. I’ve more or less dropped the Decent Hard Working Family Jam Co. Grayling obviously thinks the joke still has some way to go. And then Esther McVey – what is she? Environment? – asked to comment on the part agriculture and in particular meat production play in the emission of greenhouse gases said that she couldn’t possibly ask hard-working people not to eat steak and chips. Why not? We will never know. Once she had spoken the mantra any explanation was unnecessary, I suppose. Because some people work hard they have the right to eat as much steak as they like and not worry about the future even though they may well have perfectly sweet little grandchildren. She might as well have done a Robbie Savage and found a spokesperson to say, “the Minister is speechless”.  But hang on, is it wrong to eat steak if you’ve not been working hard?

A good name for a rail franchise would be We Are Sorry To Announce.  I asked the nice young man at Finsbury Park station why,  if the 7 45 to Welwyn Garden City from platform 7 and the 7 45 to Welwyn Garden City from platform 8 (I’m not joking, this is the New Timetable: the two trains don’t stop at all the same stations) have both been cancelled due to floods, why they think the 8 03 will get through?  “Ah,” he said with a smile, “thassa mystery!” Which made my question almost theological, I thought. Then he said, still smiling, “All we can do is go by the announcements.”  I nodded. The last time I questioned an official at Finsbury Park I was treated to a talk on the follies of privatisation and the fragmentation of the network. We’re all on the same side you see. Which is kind of comforting, unless you’re actually looking for answers.

“We are sorry to announce that the/7 45/We Are Sorry To Announce/Service to/Welwyn Garden City/ has been cancelled.”

Then I thought I would take the next train to Potters Bar – a smooth journey, no sign of floods –  and hope to find a train coming back into London that stopped at Hadley Wood. I heard a nice new excuse in the waiting room at Potters Bar: “service delayed due to a fault on a train in front of this one”. I’m collecting them now, excuses and apologies, it’s a bit like collecting train numbers. Heard a brilliant one on the train from Edinburgh to King’s Cross the other day, it was late “due to a plastic bag on the line at Moffat,” which was doubly odd because the train hadn’t been anywhere near Moffat, but that excuse was later corrected to “a plastic bag on the overhead lines near Morpeth” and yes I was wearing my hearing aids. In the waiting room a sign said, ‘Talk To Us if things are getting to you’, and I wondered how many phone calls the Samaritans get from people who are fed up with waiting for trains. There wasn’t a train to Hadley Wood, so I got on a train that stopped at New Barnet – where the train to Potters Bar had stopped 40 minutes earlier –  from where I could get a bus to High Barnet and then walk. But they didn’t want to let me out of the station at New Barnet because I’d used my freedom pass at Finsbury Park to get through the barrier, even though it was before 9 30.  These were different officials, they weren’t on our side. So I said that when the trains were in chaos I used my freedom pass as a handy alternative to paying for a ticket and then claiming the money back, it was easier for everyone that way. And I got through with a don’t do it again.   This boldness thing is definitely worth  trying. Sheila would be proud of me. And then at the bus top outside New Barnet station I watched a woman drinking from one of those weird suck-it plastic bottles while a steady stream of water escaped and trickled all down her coat, but it seemed to be beading nicely and not soaking in, so I said, “it’s a good job your coat is waterproof! That bottle is leaking badly!” She gave me a nice smile, but I’m not sure if she understood what I was saying  or even noticed the water.

The bus to High Barnet passed a school with such extravagant poster boasts it reminded me of Christiano Ronaldo.    It was a dumpy little ‘Hail and Ride’ bus , a local bus for local people with a friendly driver. It went on a shake and rattle pot-hole tour of Barnet’s laurel, aucuba and privet. And apparently it was an endangered bus.

It took me nearly 2 and a half hours to get to work. When I got there it was still drizzling.

My heart sinks when I read the profiles of the dogs on the website for Preloved Border Collies.  Preloved but not able to tolerate cats, children, other dogs, traffic, too many visitors, sudden noises, being left alone….    Didn’t I make it clear that when I said I was interested in a rescue dog I meant  a dog to rescue me?

Here’s the leaflet about the endangered bus service. Note the interesting use of the word ‘affected’ in the last paragraph, indicating that the leaflet was almost certainly written by someone over the age of 60. The people of north west Scotland, for example, would find the idea that anywhere in London could be considered to be ‘remote’ from transport networks hilarious, although if you can hardly walk remoteness can be very close. 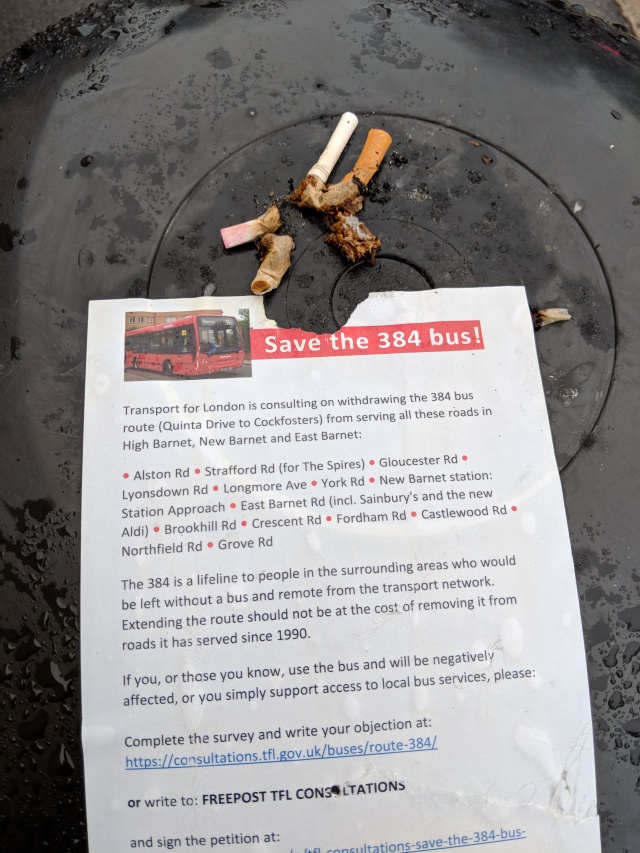 ps   Esther McVey, I now realise, is Work and Pensions.

This entry was posted in crude satire, diary, hilarious, language. Bookmark the permalink.