…with the help of £6,000,000, mostly lottery money, they’ve been creating a bindweed theme park in the new flower gardens, where the old rose garden was taken out, next to the house.

here’s some background information, in an article from the Daily Telegraph.

As with Jubilee Gardens, the landscaping is fine, the whole park is throbbing vibrantly with leisure and sporting activities, music and culture, but there isn’t any actual gardening, not even in the gardens. As you read in Christopher Woodward’s Telegraph article, the tenders for contracts for park maintenance are all about mechanisation. How many seconds to prune a shrub. In the tenders, bindweed doesn’t even exist.

A sizeable new herbaceous garden was made, but obviously little provision was made for weeding it. The idea seems to be that you make a garden, let it grow, weed it maybe once or twice a year (?), cut it all down in the winter, mulch it heavily with manure and watch it all spring back the following year. A couple of months after it had opened I couldn’t resist having a go at the thickets of two foot high weeds that were already racing away. I was put in my place by an angry park ranger who told me that there was a schedule,  there was a plan to do the weeding at some point in the future. Whatever weeding was eventually done, it didn’t touch the bindweed, or the creeping thistles, or the docks. Covering them all with manure and mulch  of course stimulated them to vigorous growth the next season. When big patches of the original planting were suffocated and dead, the autumn clearing was followed up with more manure on the bare ground. I suppose there wasn’t any money for either weeding or more planting, and no volunteers.    If I wasn’t busy down in SE1 I’d volunteer myself. Maybe I could do a bit. But I don’t understand why the Clissold Park User Group, apparently a thriving body, don’t  get their hands dirty.

An old complaint of trusts and charities is that money is available for capital projects, but not for running costs. This is particularly wrong headed with gardens, where most of the work, not just of ‘maintenance’ but also of creation takes place winter and summer, year after year. Every time a gardener decides to take out this patch of forget me not seedlings, or divide that clump of irises, every time she finds seedlings of a welsh poppy and carefully clears the chickweed and speedwell around it, every time an ancient rhododendron is cut back hard revealing ground beneath it where spring bulbs can be planted, that’s ‘garden maintenance’ and ‘design’. Just call it gardening. But gardening doesn’t sound serious enough so professionals almost always call themselves ‘landscape gardeners’ these days. If that’s to distinguish them from ordinary gardeners then it’s true: most of them don’t know a lot about gardening. The false dignity of the idea of ‘landscaping’ became so strong that  people who supply plants for offices began to call themselves ‘interior landscapers’.

I thought of an analogy for the capital expenditure wrong-headedness, the idea that a garden is a one-off project, the neglect of the whole business of everyday gardening: you wouldn’t build a hospital and then not staff it with doctors and nurses. Then I thought, that’s misleading and unfair. But then I remembered: (I have it on the authority of somebody who works there, and I trust her – she’s a doctor,) after they built the monumental new Royal London Hospital with a wildly expensive PFI contract they didn’t have enough money to staff it and some wards remained empty for years. As a trade, gardening has much in common with health and social care. Both are time consuming, never ending, under funded and suffer from a shortage of skilled people.

This is what it’s like in Clissold Park now: 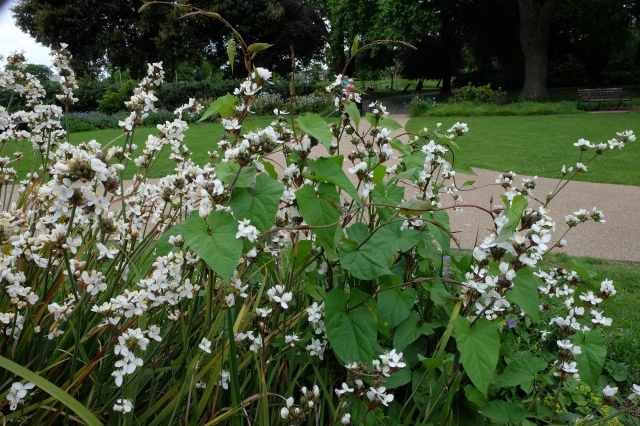 Libertia with bindweed. The libertia is now fully grown, the bindweed just getting going.

This is a tip of the iceberg shot. Thick mulching has helped a lot with annuals. That just leaves the bindweed with support from docks, creeping thistles and nettles

Bindweed on an escallonia hedge. Once it can’t go any higher it forms thicker and thicker suffocating blankets. 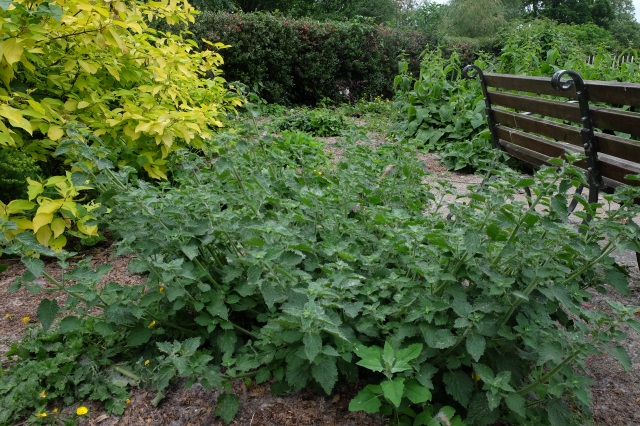 Call it a weed, call it a wild flower, this is black horehound, Ballota nigra. Whatever you call it, it’s powerful. There’s more bindweed in the yellow dogwood behind.

Dock in alchemilla and salvia.

Here they seem to be trying to get rid of the weeds with a membrane. The bindweed roots just travel to the edge and then shoot up.

The stiff effect of block planting, repeated in the background, with bare soil. 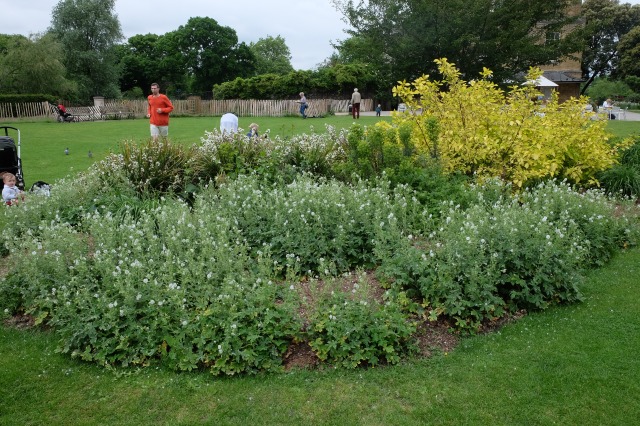 I don’t mean to suggest that the whole garden is ruined. Here Geranium phaeum ‘Album’ has flowered well, but there’s such a big monocultural block of it, it’s nearly finished flowering, and it has mildew. The species, deep purple, almost black, is striking and much more healthy.

But maybe the real question is, who cares?

This entry was posted in community politics, gardens and tagged bindweed, clissold park. Bookmark the permalink.

1 Response to meanwhile in Clissold Park…