at a full stop in the Gasterntal

Posted on February 22, 2017 by jonathan trustram

and how to go on? How to write on a subject about which I know next to nothing, but find myself drawn to?

But first, one or two more deviations, diversions and prohibitions:

15. We moved to Cold Ashton, north of Bath and east of Bristol, in 1950 I think. The one street village  extends along the edge of the southern scarp of the Cotswolds, 700 feet high, hence ‘Cold’. Opposite our house  was the beautifully built eight foot high drystone wall of the thickly wooded garden of the Victorian vicarage, which was on the scale of a manor house. That wall taught me the meaning of the word ‘private’ before I knew the word itself. I only once remember going behind it: we sneaked in, me and my sisters, we were hidden away in the shrubs, some distance from the house, which had a great swathe of lawn in front of it, and Myna, just a toddler at the time,  ate a lords-and-ladies berry. Somehow I knew that they were poisonous. We all ran for it and hoped for the best.

16. When I went for my long and winding walk from Cornwall to Scotland in 1973 I took a notebook in which I wrote virtually nothing, for seven weeks. And I spoke to virtually no one. Years later I wrote this, and only this:

‘On that walk I avoided farms when I could, behaving like a trespasser even though I was almost always on public rights of way, listening for dogs, cursing fences, skirting woods, striking the pose of the dispossessed, the vagrant; finding safety in invisibility. Often I didn’t camp till sunset and was on my way again soon after sunrise.’

But there was one brilliant meeting. I walked up the hills and valleys from Bath and came once again to Cold Ashton. It must have been sixteen years after we’d left, although it seemed longer then, or sixteen seemed like a bigger number then than it does now.  Next door to our old house was Mr Lewis at his front door. We said hello. We chatted for a minute or two. I didn’t tell him who I was. It was enough that he had greeted me warmly as a stranger.  As I left the village I saw a badger, moving slowly, in broad daylight. The only time I’ve ever seen one. And then over the dreary arable Cotswold plain.  The Cotswolds are only interesting on the edges and in the dips and folds.

17.   It must have been one evening after I’d passed my driving test, which was one of the biggest flukes of all time, in about 1963. A few of us drove one evening to Stonehenge in my mother’s car. We had a special relationship with the stones because we lived in Amesbury, and the landowner who had given the site to the nation had stipulated that residents of Amesbury, about three miles away, should have the right of free entry. Apparently. In any case there was nothing but an ordinary waist high wire fence, you could step over it. All of a sudden a voice came out of the gathering darkness: Stonehenge is closed! It was especially  striking because I don’t think we even knew that Stonehenge could be closed. It wasn’t like a pub or a theatre with opening times or a schedule of performances. It had just been there for four thousand years, part of the landscape. Of course this story doesn’t quite make sense, because we knew that we were exempt from the entry fee that others had to pay.

Anyway, he was only dong his job. We obeyed and left. I don’t think I ever went back.

I’m still working my way back to the Gasterntal, but I’ll leave you with an illustration of prohibition at the Giant’s Causeway. 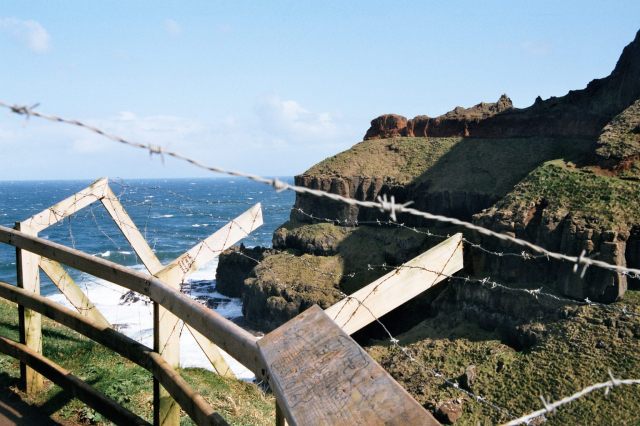 And this is why they think it’s dangerous. This next picture was taken 11 years after the last one, those slopes have been slithering for a long time. But remember the great mountain illusion: what looks like a sheer slope when you view it head on is rarely so. If it were there would be no grass or soil left on those cliffs 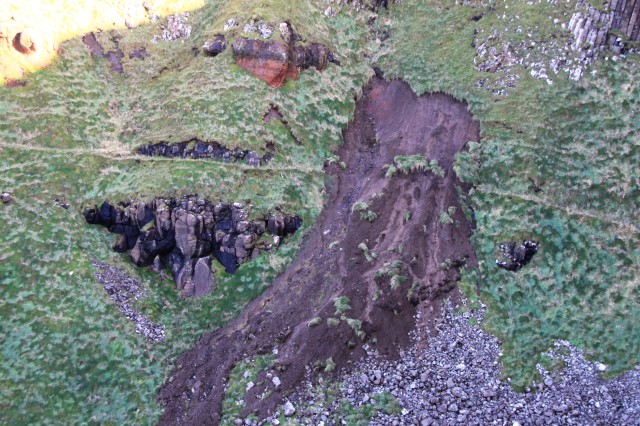