Posted on January 15, 2017 by jonathan trustram

A few words on the claim, the acclaim, the clamour for endemics.

When we say that a disease is endemic, we simply mean established, I think, in a particular area. But when it is said that a plant is endemic to a particular area – which could be huge or tiny – it means that it grows nowhere else. The dandelion is endemic to the northern hemisphere, the european larch is endemic to the mountains of europe, Artemisia nivalis is endemic to several patches of rocky ground on two mountains near Zermatt. Endemics are the subject of much celebration. Tourist guides to different mountain valleys, even if they have only a few words to say about the flowers, will tell you about the endemics. They make a place seem special. The tourist website for Zermatt tells us ‘here you can find flowers and grasses that are unique in the world’. But the ordinary flower lover shouldn’t get too excited. Here’s a page of artemisias from ‘The Alpine Flowers of Britain and Europe’ by Grey-Wilson and Blamey: 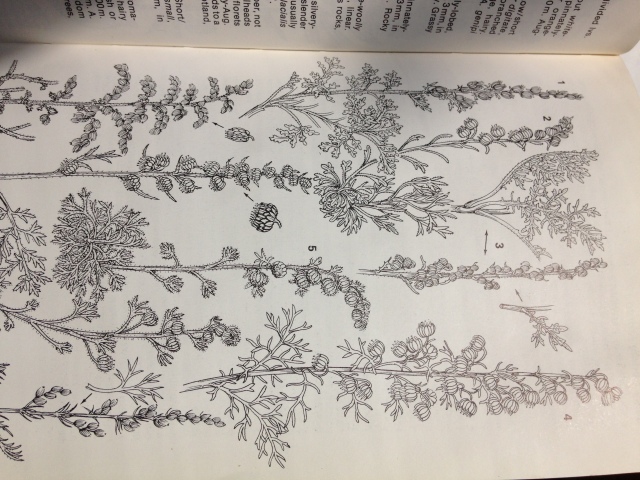 The book describes fourteen of them; A. nivalis is ‘less hairy’ than A. petrosa, and has hairless florets. You need to carry a magnifying glass if you’re interested in that kind of detail, and first of course you have to be able to identify A. petrosa.

From a Slovenian tourist web-site: ‘The Triglav National Park prides itself on pure waters, deep-cut gorges, remains of virgin forests, richness of biodiversity, and an eldorado of mountain flowers including a number of endemic plants such as Triglav Hawksbeard (Crepis terglouensis), Julian Poppy (Papaver alpinum subsp. ernesti-mayeri) and Silver-leaved Cranesbill (Geranium argentum)’

These claims are contentious: Geranium argenteum is distinctive and beautiful but it is not endemic to the Triglav National Park, it’s also found in the Italian Alps and in the Apennines, and the poppy which is, as they say, a sub-species of Papaver alpinum, is very hard to distinguish from other sub-species from different areas of the Alps. In districts isolated from each other by mountain ranges evolutionary change leads to the splitting off of these sub-species. My book has seven similar poppies and it doesn’t even mention ernesti-mayeri, which could be a recent naming, or the object of controversy. The work of defining and naming is as continuous as the process of evolution and the progress of international conferences. As for the crepis, known in English as hawkbeards (not to be confused with hawkweeds), they look like dandelions and there are at least thirteen of them in the Alps. Languages used to develop like poppies; they change and split off from each other, they evolve. In the Pyrenees there were dozens of languages separated by mountain ridges, but they’ve all been ironed out now. Television and the internet simply finished off a process begun by the French state and by the revolutions in communications and education of the 19th century.

But the poppies, which can be yellow or white, are common in the Triglav Lakes valley, for example, and are very beautiful, so delicate and growing among harsh, white limestone. And I went back to Crna Prst partly to see the geranium again, its silvery leaves and the almost cistus-like papery crumple to its pale pink flowers. So I can go along with ‘eldorado’. I just quarrel with that desire to be unique, with that mad competition with all the other beautiful places where similar communities of plants can be found.

Herb robert is the very opposite of an endemic; I love it for its ordinary ubiquity, even though I pull up hundreds of them in my garden. It occurs all over the place and has the same name in different (west european, at least) languages: Geranium robertianum in latin, erba roberta in Italian, herbe á robert in French, Ruprechtskraut in German, hierba de San Roberto in Spanish, Erva roberta in Portuguese, robertskruid in Flemish. In parts of North America though, where it’s an alien, an immigrant, they just call it stinky Bob. Kraut, by the way, just means plant or herb in German. Why did it become an English term of abuse? And who was Robert?

And I think of one of my favourite plants, the alpine penny cress, Thlaspi rotundifolium, which is endemic not to a region or a range or a country but to a particular European landscape type, limestone scree, all the way from western France to Austria, so that no tourist office can claim it as its own. Or the much more common moss campion, Silene acaulis. It has a proper English name because it is a native. It’s found in the west of Ireland, in the Scottish highlands, and also in Scandinavia, in the Pyrenees and throughout the Alps. How amazing to see it again on Ben Alligin recently: so neat, so bright on the green-brown slopes, a proper little alpine pin cushion dotted with hundreds of pink flowers. I’d forgotten about it.

Here in Britain we have few endemics, which might make our country less special than some would claim. There are hundreds of different kinds of pine in the world, some found only in very small areas. But Pinus sylvestris is found from Western Europe all the way to the Caucasus and Siberia. You could call it the Eurasian pine, but we call it the Scots pine, which makes it seem like our very own special tree. But all is not lost; it seems that our pine might have certain tiny details which distinguish it from other European races, although these differences might only be detectable in the laboratory. And, yes, ‘race’ is the term they use to describe geographically distinct groups of the same species.

I suppose place names are by definition endemic. Then Londra and Londres would be sub-species of London, and subtly different. But when a culture and a people are smashed, driven out, place names can persist. Few traces exist in English of Celtic languages with one famous exception, our several avons. Afon in Welsh. (Strangely, for the English the English version of the word is a better guide to the Welsh pronounciation than the Welsh word itself, because the Welsh ‘f’ sounds like our ‘v’) It’s as if the Saxons asked some survivors the name of the river and they thought, they’re stupid, these Saxons, and told them that it was a river and so it became known as the river River. Chalk valleys in Wiltshire are called combes, like the word cwm in Welsh. In south west Switzerland , a beautiful mountain valley is called the vallon de Nant, the valley of Valley, again from the Welsh, like Nant Ffrancon or Nant Gwynant; it’s one of that little handful of words you can’t help but pick up if you do any walking in the Welsh mountains. It seems that traces of lost languages survive above all in the landscape. In the Lake District the names of three mountains are the only record of a language which was spoken before the Anglo-Saxons and the Vikings and the Celts arrived, so they say: Skiddaw, Helvellyn and Blencathra, though Blencathra is not quite secure, having an English name as well, Saddleback.

One more little fact before I say goodnight. For North Londoners, this one. That pub on the corner of Seven Sisters road, at Finsbury Park, the Twelve Pins. It’s nothing to do with the bowls place nearby, it’s named for the Twelve Pins of Connemara, a range of mountains, Pin being an Irish version, an English corruption, of the more commonly known word from Scotland, Ben or Beinn.

Moss campion, Silene acaulis, on Ben Alligin, and the silene of the lambs on Tosc in Slovenia.  That’s not my joke. I put that photo on the Scottish Alpine Garden Society website and someone – from New Zealand, I think, put as a comment, ‘Ha! The silene of the lambs’. And of course one of the best things about names is that they lead to so many good jokes. So thankyou, that woman in New Zealand.