Posted on August 2, 2016 by jonathan trustram

there’s a botanical theatre down on the beach.

the stage is a scoop in the cliff  made by landslips, protected near the edge by two dead looking thickety blackthorns, like a half drawn curtain.

they’re all there now, a new crowd of plants, the verbascums are having to move back.

it seems that when there’s an opening, a dramatic event which is like an act of rebellion in a conservatively stable ecosystem like that of the thorny banks leading down to the sea, which is a cornish version of the maquis, or the phrygana – (would the Fischer-Williams have seen the same landscape? It would have been more intensively grazed, there would have been less bracken, and maybe people still gathered gorse, or furze for fuel.It should be possible to find out?  I  think they would have seen more or less the same landscape,  the thorny phrygana thickets and the pastures with a rich and delicate flora,)  – when a gap is torn open in that familiar old landscape and virgin soil is opened up, then  seeds rush in from miles away to make a new life. Seeds from every walk of life, seeds which can’t get along together for very long. Now, more than last year,  there are cornfield and garden annuals: sow thistle, such an eager coloniser; diminutive scarlet pimpernel creeping in; four feet high charlock, a single plant,  ripening thousands of seeds; wild carrot is more than twice as tall as it grows on exposed banks; you can look up into the gothic bracts behind the flower heads; eupatorium cannabinum, or hemp agrimony, which usually grows in lush places near rivers,  was just coming into flower at the end of july, soft pink brushes of thousands of clustered stamens; hawkweed, (one of those yellow daisies, I put names to them last year but they’ve gone again) on steeper, rockier places;  one clump of  the white daisy  which is common on the steep slopes just where you down to the beach. And then there are the plants destined to win out in the end if this little patch of promised land doesn’t keep changing: the ones removed by the landslips, the ones which dominate the stable slopes, the banks and clifftops it’s impossible to walk through, though from a distance you might think you can. Why don’t we have a word for it in English? the garrigue, the mattoral: brambles, blackthorn, woodsage, heather, bracken, gorse (not all together.)  They’re not so conspicuous at the moment, but you can see some slicks of brambles spreading out along the ground below the tall herbaceous plants. But maybe it will keep changing. Next year’s verbascums have put out their rosettes of leaves on the freshly slipped soil at the back of the stage. A small slide has evidently followed the bigger, earlier ones. So maybe a whole little valley is being hollowed out. The water seems to gather there, it sustains the young plants, but it also contributes to soil slide in the winter months.

There’s more. Nearby in the shingle a solitary euphorbia is growing. Just a seedling.  And a healthy looking good king henry – good to eat – is pushing through a little pudding of half rotten seaweed.  And not far away on a rock at the edge of the beach is a wonderful clump of sea kale, a dense cloud of little white flowers in spring; big, crinkly glaucous leaves, the kind that garden designers and florists go mad for. The summer star is samphire, salt resistant, (salt eating?), finding out fissures in big rocks all along the beach, just opening its chunky umbelliferous fists at the beginning of august.

2 and 3.  rock samphire, it likes solid but flawed rock, where it has few companions 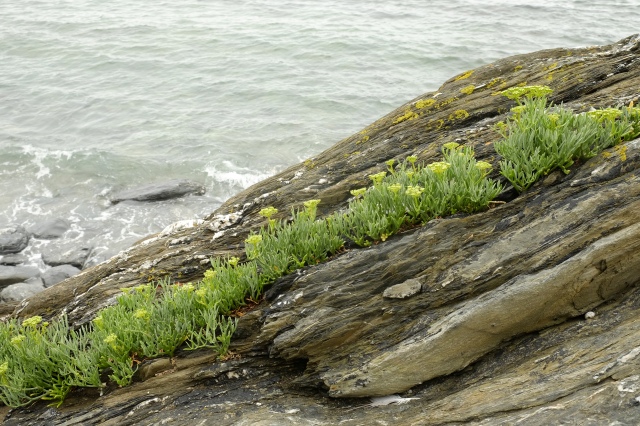 4. the solitary euphorbia. on the left side you can see a little blob of milky sap: all euphorbias have it . I pinched off a shoot just to make sure…

5. good king henry, happy as a pig in shit (until the next storm) 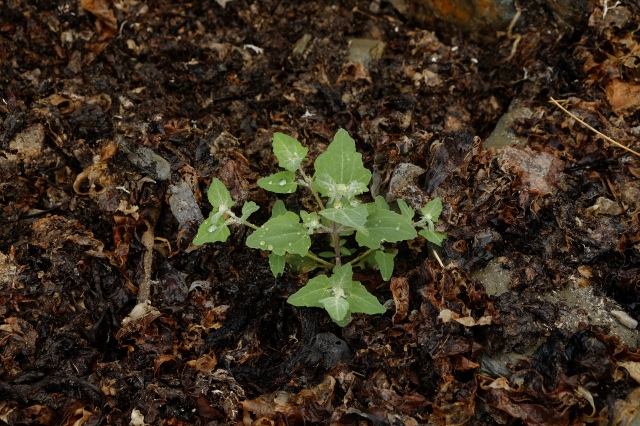 6. a plant of the shingle, scurvy grass. 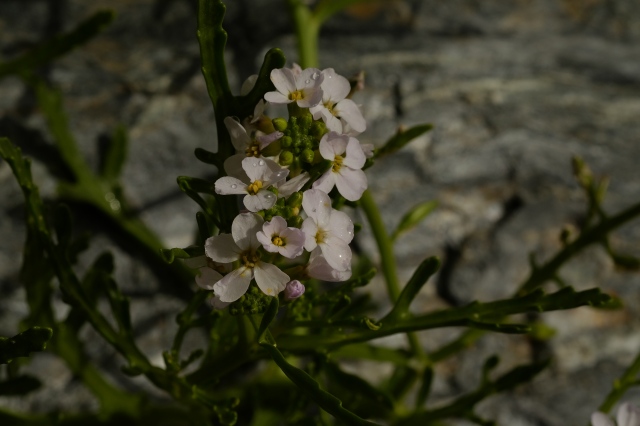 7. a view from the stage, with verbascum (last year’s stalks have survived a year of cornish weather), a corner of the blackthorn curtain, much branched charlock not very clear on the right, and hemp agrimony blurred in the foreground. 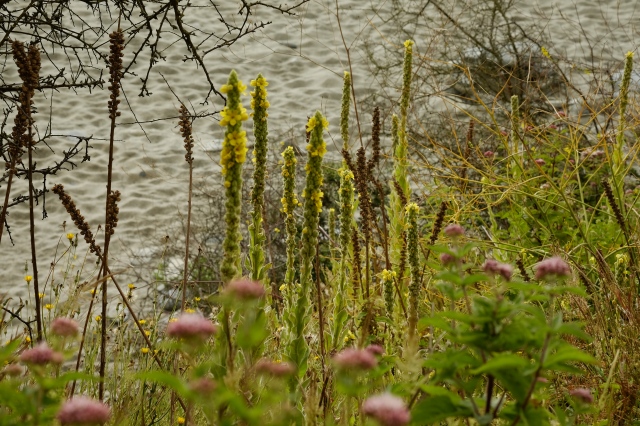 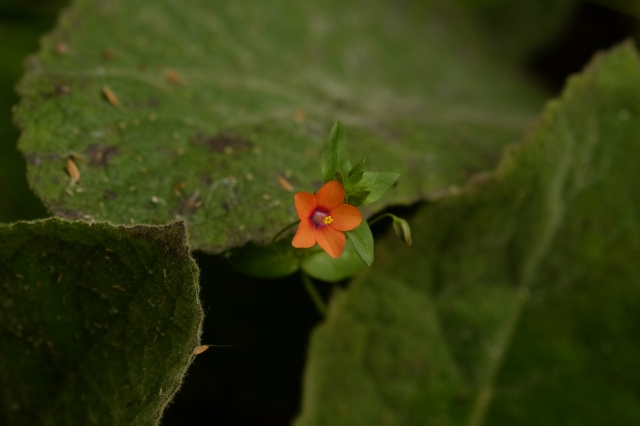 11. next year’s mulleins on the new bare patch. 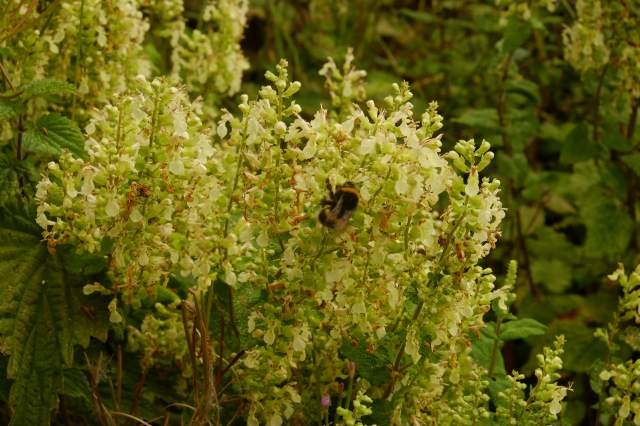 13. a view from the beach, deceptive like most views. 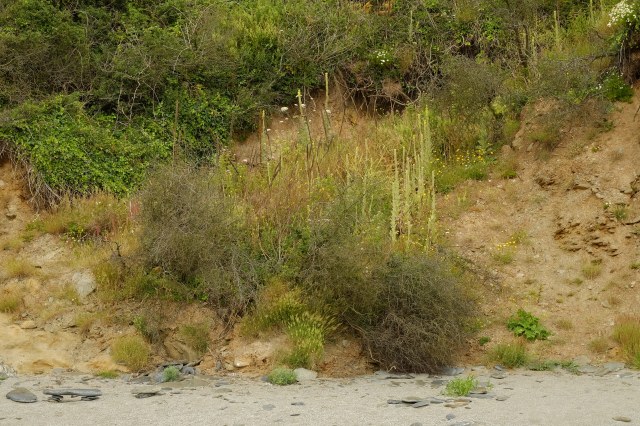 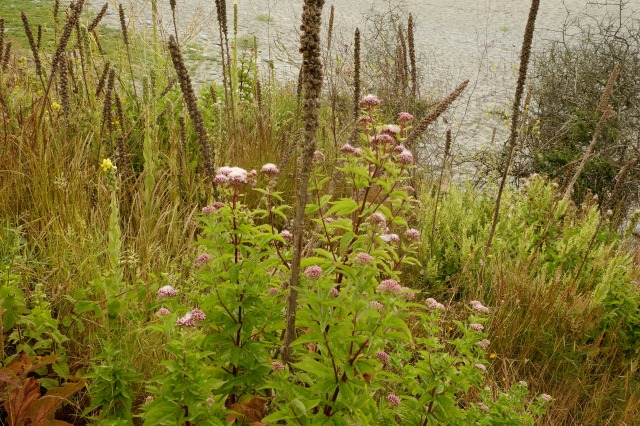 16. one last one for now.  There’s very little of it now by the path on the way down to the beach, maybe because the sheep aren’t there this summer? – but  on the short turf  just before you get to the rough land of the Dodman are hundreds of  centauries, worth getting down on your knees for, if you still can. 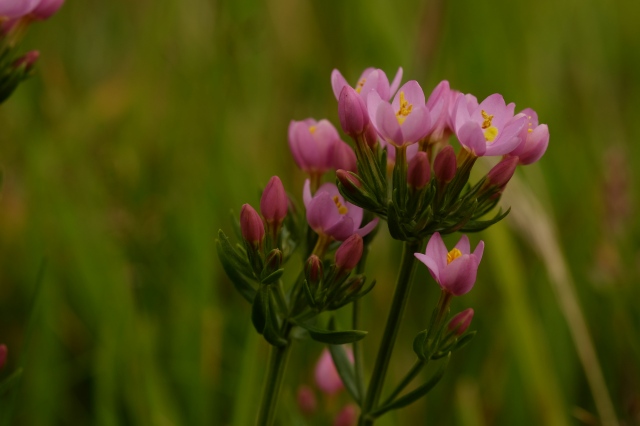 17. I nearly forgot the carrot bracts, (important in the identification of confusing umbellifers).

This entry was posted in mountains, flowers, landscapes, walks and tagged lamledra. Bookmark the permalink.

1 Response to lamledra 3, the botanical theatre on Vault beach