sparrows, with footnotes in Bern.

I thought we had the situation under control.  I saw myself, without being aware of it, in a priestly role, a guardian of the holy places which provided sanctuary for God’s creatures, a dozen or so surviving sparrows which flitted noisily between the pyracanthas. The council contractors used to prune them short every year; we simply stopped pruning them so that they grew big, safe and welcoming, although of course they are one of the plants commonly described as ‘vicious’ when looked at another way. The sparrows flew between the churchyard and the vicarage yard and the gardens next to it, they had shelter, food and nesting sites. We only pruned the now bulky privet hedge once a year, in winter, so that they wouldn’t be disturbed during the nesting season. Though we didn’t feed them, we made sure that food was available, and I enjoyed the aphids on the rose buds almost as much as the buds themselves. And people used to feed the pigeons, so there was always seed lying about, not to mention the remains of sandwiches and chips. We put up nesting boxes in little clusters, because sparrows are sociable. There were no cats, no sparrow hawks and hardly ever a crow or a magpie.

Wasn’t this the ideal world for sparrows? And still they disappeared. One day just before Christmas I realised that I hadn’t seen a sparrow since – I wasn’t sure when. I asked other people, and no one could remember the last time they saw one.

The decline of the sparrows is yesterday’s news, hardly talked about any more, like the loss of the elms in the 70’s.  We’ve got used to the disappearance of 90% of London’s sparrows. I assumed that, especially in such safe places as St John’s churchyard, the other 10% would settle down, regroup and advance to take back their city once more. That having survived the mysterious plague, they would, like the survivors of the Black Death or the concentration camps, multiply. Instead, with few letters and articles of lamentation in the newspapers, the last of them are quietly fading away.

But the authorities promised much. This is part of a document from the London Borough of Lambeth:

E) What will the House Sparrow Action Plan do?

Objective 1. We will work to help understand key factors affecting the population and distribution of house sparrows in Lambeth, contributing to and supporting London and UK-wide research and surveys. A programme of scientifically valid research to explain the decline in house sparrow populations will be delivered by 2010.

Objective 2. We will involve local people in projects and activities to raise awareness of house sparrows, including commissioning and completing a Borough survey by the end of 2006.

F) Who is involved in the House Sparrow Action Plan?

The Lead Community Partner would be the Central London Local Group of the Royal Society for the Protection of Birds (RSPB), and/or British Trust for Ornithology (BTO). Other Partners include the London Wildlife Trust, Greater London Authority, London Natural History Society and the Council’s Grounds Maintenance Contractor.

For more information on the Lambeth House Sparrow Action Plan, including copies of this plan in paper or electronic format, please contact:

Further advice on the house sparrow, its ecology and conservation, and the management of habitats to protect the house sparrow and other British bird species, can be found on the following websites.

Did they deliver (by 2010) a programme of scientifically valid research? If they did, I missed it, and I think I’ve been paying attention. I don’t know when I wrote the above, clearly before 2010. We still see, or rather hear one or two sparrows occasionally. But they’ve become very shy. In the open they dodge from one bush to another soldiers under fire. That’s why I was even more surprised and delighted by the sparrows of Bern earlier this summer. I had a couple of hours between trains and went to see the cathedral which has a great 16th century judgement scene above the west doors, beautifully restored. Sparrows were flying in and out of it, not caring whether they were in heaven or hell. In a little park with an open air cafe near the cathedral they would come right up to you if you threw a few crumbs, they had that boldness, that cheekiness which used to make the cockney sparrows both endearing and sometimes annoying. 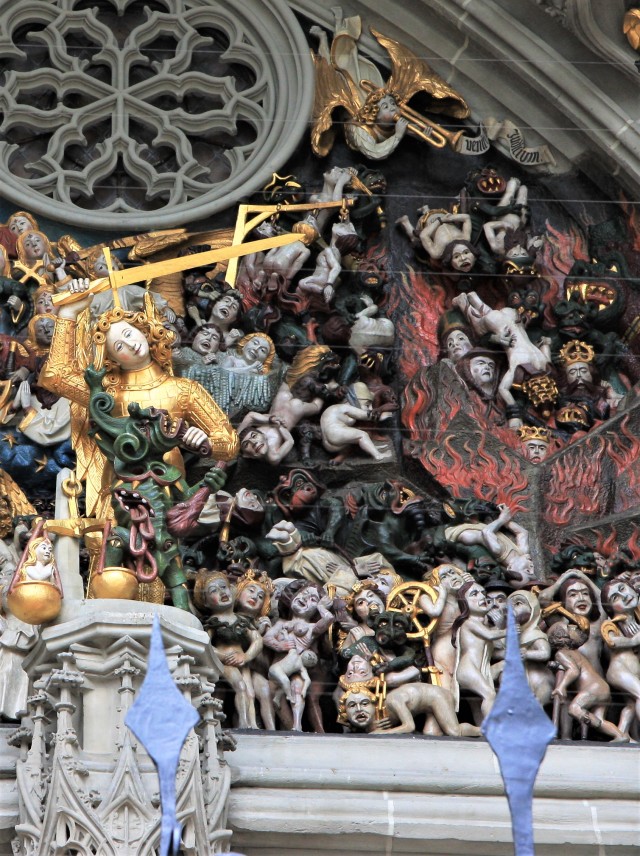 Inside a series of stained glass windows show what I first thought were wealthy sinners  being taken by death to be despatched to hell, but which I now think show worthy burghers and noblemen displaying a calm trust in God. I must look them up….. 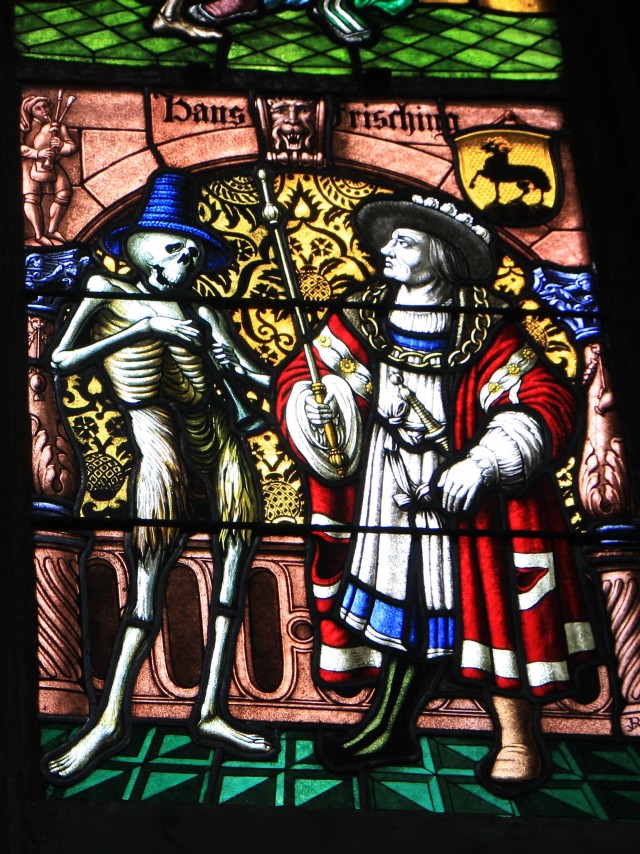 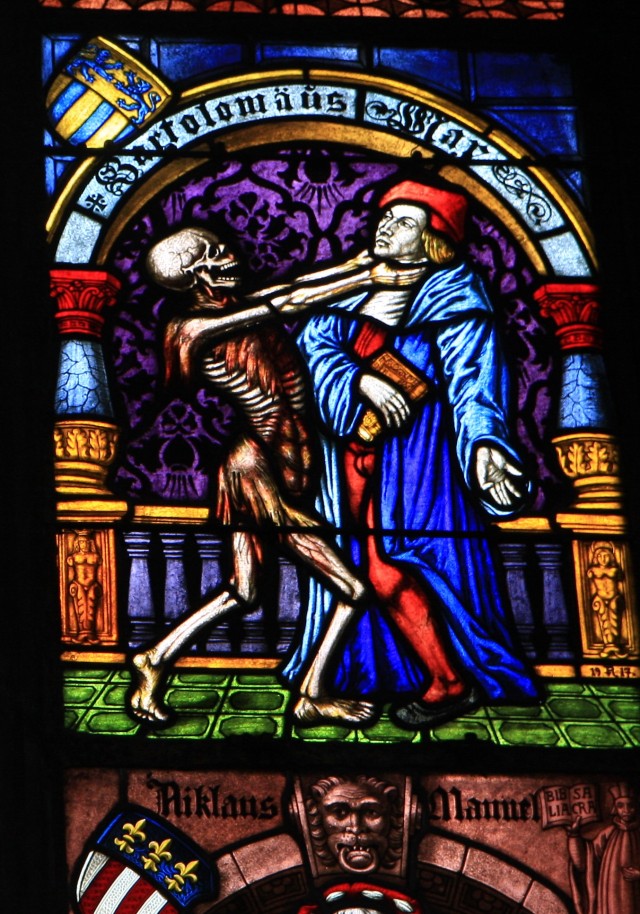 This entry was posted in community politics, gardens and tagged Putting Down Roots, sparrows, Switzerland. Bookmark the permalink.