In gratitude to the people of Great Britain….

I thought you might like to see how the Kindertransport memorial is getting on. (You’ll find what I wrote before and some photos under february and march 2012.)

The sculpture makes you aware of the extraordinary self absorption of those who sit or lean or put their bags and rubbish on it. And there are now four big wheelie bins along side. 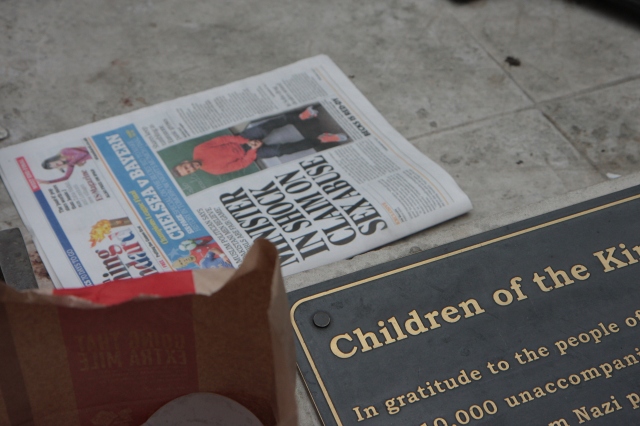 No wonder the kids have their heads in the air.

a PS to ‘I’m on the bus’: it was just a trick of the light, and my point of view. cheap, hollow satire. The first letters of that list were obscured by the window frame which was of the same colour. I went past again the next day and read the whole boring text.  Luckily, I had another cataract operation a couple of days after. Why  invent satirical jokes when people at Liverpool Street station satirise themselves? But then how come my compassionate feelings towards Jewish refugees lead me to feel contempt for my fellow Londoners?

I’ve been looking at some websites about the Kindertransport. (Try Frank Meisler, the sculptor of the current memorial, and Flor Kent, who made the supplanted little girl.) Loads of respect in Danzig, Berlin and Vienna. People laying flowers. No dirt, no rubbish. Are those photos sanitised, taken on opening day? Although I see there’s a Macdonalds right next to it in Danzig. And it’s exactly the same sculpture! One frozen image for departure and arrival, (and, at Hook of Holland, for half way there.) Except that in Danzig one little boy has his hand in the air to wave goodbye, like a manipulated doll.

Good news though – I’ve found the little girl. (Apparently Rosie told me some time ago, and I didn’t take it in.) She was returned to Liverpool Street last year, ‘rededicated’ and is tucked against a wall near the main entrance to the tube station, accompanied this time by a small boy, although being exactly the same she still looks very sad and lonely. The litter was carefully placed behind her so as to be scarcely visible. She is also to be found at other stations in central Europe, thanks to the process of casting in bronze, so that she looks traumatised and lost whether saying goodbye for ever to her family or arriving gratefully among the people of Great Britain.

This entry was posted in and the city, history, politics, in the City, war and tagged Germany, refugees. Bookmark the permalink.